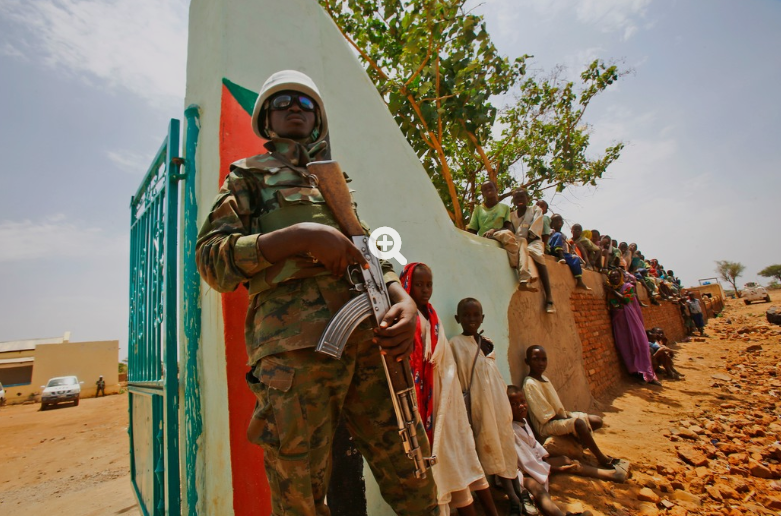 Amnesty International has disturbing new evidence, including satellite imagery, showing that Sudanese government forces, including the Rapid Support Forces (RSF) and allied militias, have continued to commit war crimes and other serious human rights violations in Darfur. In the past year these have included the complete or partial destruction of at least 45 villages, unlawful killings, and sexual violence.

Tens of thousands of civilians currently protected by United Nations (UN)/African Union (AU) peacekeepers (UNAMID) in Jebel Marra, Darfur, must not be placed at the mercy of the RSF, a ruthless Sudanese security force that has committed crimes against humanity and war crimes, the organisation warned ahead of a crucial vote on the mission’s future on 27 June.

If the UN Security Council and the AU Peace and Security Council authorize UNAMID’s closure, it would effectively give the RSF control over civilian areas. Formed from the former “Janjaweed” militia, the RSF are responsible for crimes against humanity in Darfur’s Jebel Marra region as well as the ongoing bloody crackdown on protesters in Khartoum since 3 June.

“In Darfur, as in Khartoum, we’ve witnessed the Rapid Support Forces’ despicable brutality against Sudanese civilians – the only difference being, in Darfur they have committed atrocities with impunity for years. Sudan’s Transitional Military Council (TMC) must immediately withdraw the RSF from any policing and law enforcement operations, especially in Khartoum and Darfur, and confine them to their barracks in the interests of public safety,” said Kumi Naidoo, Secretary General of Amnesty International.

“As for the UN and the AU, they must not turn their backs on people in Darfur who rely on peacekeepers for protection. A decision to close UNAMID would recklessly and needlessly place tens of thousands of lives at risk by removing their only safeguard against the government’s scorched earth campaign.”

In 2017 and 2018, the UN and AU decided to dramatically reduce the number of UNAMID troops, close the majority of its bases, and reconfigure the remainder of the mission to focus on the protection of civilians in the Jebel Marra region of Darfur, where the human rights and protection concerns were greatest. At the end of June, the AU and UN are considering voting to withdraw all the remaining peacekeepers from Darfur by June 2020, including the majority of the remaining team sites by December 2019.

The closed UNAMID bases were supposed to be handed over to the government to use for civilian purposes but are, in fact, nearly all being used by the RSF. This same Sudanese government security force carried out crimes against humanity in North and South Darfur in 2014, in Jebel Marra in 2015 and 2016, continues to carry out war crimes and other serious human rights violations in Jebel Marra, and was chiefly responsible for killing scores of protesters in the Sudanese capital of Khartoum since 3 June 2019. Moreover, Sudan’s current governing body – the TMC – has demanded that the remaining UNAMID bases be handed over directly to the RSF.

“Given the RSF’s history of brutality in Jebel Marra, North Darfur, South Darfur, Southern Kordofan, and Blue Nile, and the shocking violence the very same forces have been meting out against protesters in Khartoum in recent days, it is bewildering that the UN and AU would even consider removing the last peacekeepers from Darfur, effectively handing over control of civilian areas in Jebel Marra to them at this time,” said Jonathan Loeb, Senior Crisis Adviser at Amnesty International.

“The logic behind the drawdown was premised on the idea that peacekeepers should withdraw once conditions on the ground had sufficiently improved. This arguably made sense in certain parts of Darfur, but it is not the case in Jebel Marra. Perversely, the UN is using its own failure to document the violence in Jebel Marra as the basis for it argument that the mission should close.”

Hundreds of thousands have died from direct violence and conflict-related disease and starvation during the conflict in Darfur. According to the UN, approximately 2 million people remain displaced by violence in Darfur, many of whom remain refugees in neighboring Chad.

Despite severe government restrictions on access to Jebel Marra for journalists, independent human rights monitors, and UNAMID, Amnesty International has been able to confirm recent attacks against the region’s civilians, much of which have gone unreported by the mission.

Closing the mission could have a devastating impact on the displaced population in and around Jebel Marra, many of whom rely on UNAMID bases for protection.

UNAMID’s Sortoni base in northern Jebel Marra is one example of where UNAMID’s presence is still vital. In 2016, tens of thousands of civilians fled to the area immediately around the base after the Sudanese government forces destroyed their villages; many remain there today, unable to go home because of fear of ongoing attacks by security forces against people who attempt to return to their areas to farm. Closing the base will leave people exposed to attack by the very same fighters who destroyed their villages and still continued to carry out attacks in the area during the past year.

Amnesty International interviewed people living around Sortoni and other UNAMID bases in Jebel Marra, nearly all of whom said they feared a return to large-scale violence if UNAMID left, and that they would be forced to flee again if this happens.

Adam, a 54-year-old man who was displaced to Sortoni by violence in 2016 told Amnesty International that his brother was killed in late 2018 when he tried to return to his farm in northern Jebel Marra. Adam told Amnesty International that he is fearful of UNAMID leaving: “UNAMID, even though they are not doing much… their existence is a threat to the [security forces] who want to mistreat people… that is why [those forces] don’t commit atrocities. If UNAMID is not there then they will have nothing to fear. … If no one is protecting then there will be unimaginable behavior. Anyone who is armed can do anything.”

“Although UNAMID has consistently failed to prevent attacks on villages, it has been able to provide protection for civilians displaced by violence who manage to get themselves to safety near UNAMID bases. In certain parts of Darfur this protection is still urgently needed and UNAMID’s mere presence in these areas justifies the mission’s continued existence in Jebel Marra,” said Jonathan Loeb.

The case against closing UNAMID has been made even stronger by events in Khartoum on 3 June, when the RSF swept into protest sites and opened fire on unarmed people, killing more than 100 and injuring many more. Senior commanders in charge of the TMC – which includes the RSF – are the same individuals responsible for carrying out atrocities in Darfur.

“It’s hard to imagine a worse time to decide to close UNAMID. Sudan is in the middle of a political crisis. And given that the men who have retained political and military power are the architects of many of the most violent campaigns during the Darfur conflict, it would be dangerously naive for the UN Security Council and the AU Peace and Security Council to dismiss the possibility of an escalation of violence against civilians in Darfur. A decision to remove the last remaining peacekeepers from Darfur at this time would reveal a shocking lack of understanding about the current reality in Sudan,” said Jonathan Loeb.