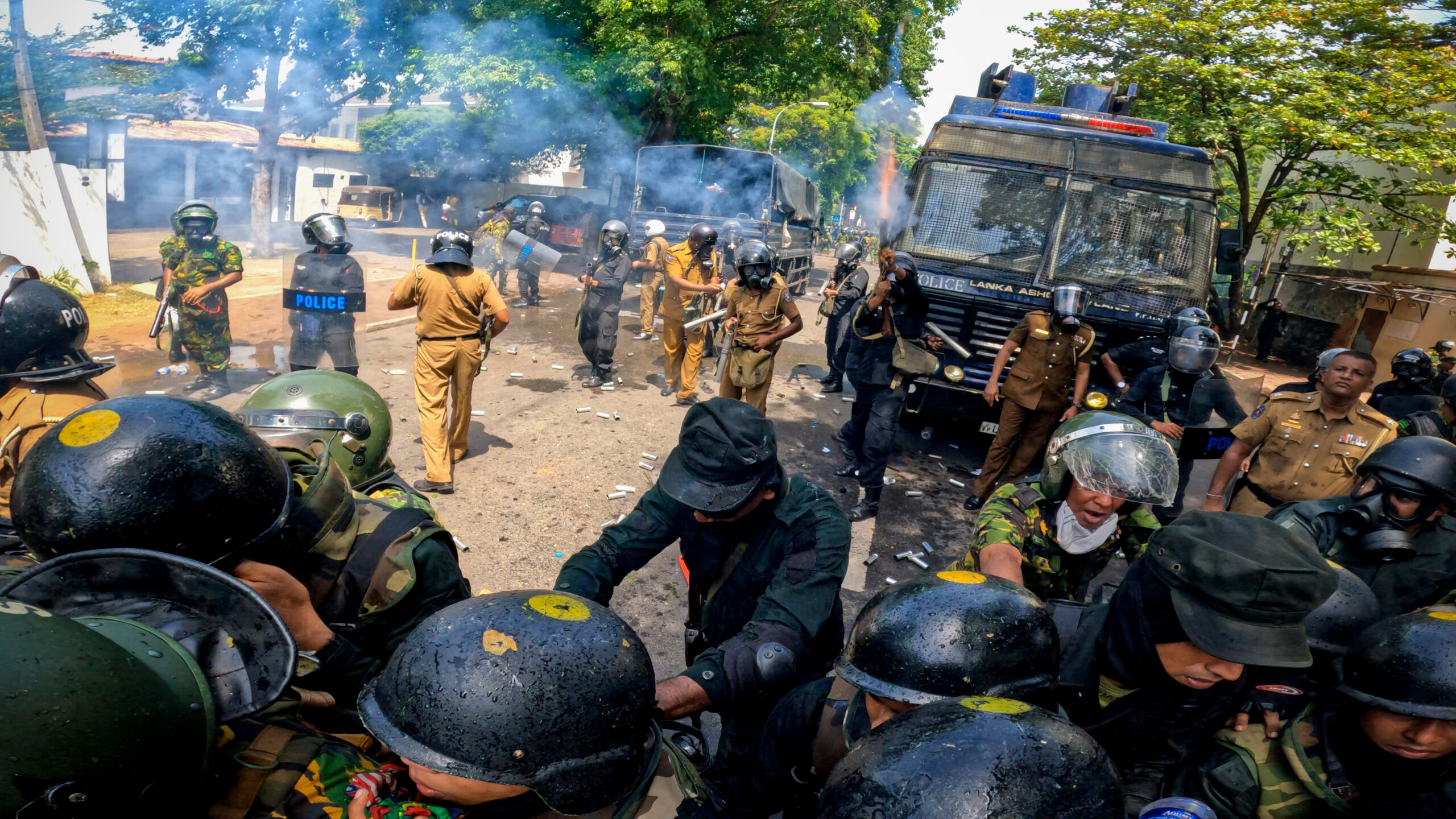 The Sri Lankan authorities have fiercely clamped down on protests and demonised protesters during a period of economic crisis and hardship in the country, Amnesty International said in a new digest released today.

The briefing, Penalized for Protesting: Sri Lanka’s crackdown on protestors, details how the authorities have failed to protect peaceful protesters and resorted to excessive use of force, deploying the military to police protests and carrying out reprisals against protestors while also demonizing those who exercise their protest rights peacefully.

“Over the last few months, Sri Lanka has seen widespread protests over the worst economic crisis in the country’s post-independence history. People have the right to express discontent peacefully and the state has an obligation to facilitate this right but the Sri Lankan authorities have repeatedly and unrelentingly stifled the voice of the people,” said Yamini Mishra, Amnesty International’s South Asia Regional Director.

“The new government in Sri Lanka has continued resorting to the unlawful use of force, intimidation and harassment to subdue protestors, sending a chilling message to the people of Sri Lanka that there is no room for dissent. The right to freedom of peaceful assembly is a keystone of any rights respecting society. It must be respected and protected.”

It must be noted that there have been some incidents of violence during protests since the protest movement began in February 2022. While these protests cannot be deemed as peaceful, the response by the authorities to such protest must still comply with human rights laws and standards.

Since the protests began five months ago, the police and armed forces have routinely misused tear gas and water cannons against largely peaceful protesters. On two occasions, security forces fired live ammunition at protesters, killing at least one person in Rambukkana on 19 April.

This unlawful use of force was also witnessed in other key incidents demonstrating the government’s refusal to facilitate the right to peaceful assembly, despite their obligations under international human rights laws and standards.

Since President Ranil Wickremesinghe came into power on 21 July, over 140 protesters have been arrested, while a further 18 have been issued travel bans. Furthermore, Members of Parliament and the President have repeatedly described protesters as “terrorists”. President Wickremesinghe, meanwhile, also labelled protesters as “fascists” amid a broader pattern of demonizing the protest movement. The authorities have taken this one step further by weaponizing the draconian anti-terror law Prevention of Terrorism Act (PTA) to arrest three protesters. Amnesty International has, in the past, documented the use of the draconian PTA by the authorities to target, and harass minorities, activists, journalists and critical voices. The PTA is in violation of international human rights law and must be repealed.

‘They want me in jail’

Since 2 April, the authorities have arrested some people in a manner that flouts due process. Security forces did not produce official identification or produce arrest warrants or adequately explain the reason for arrests. Certain individuals were taken away and held for several hours at undisclosed locations. On these occasions, no confirmation of arrest was issued, nor were detainees given the opportunity to inform their relatives, friends or lawyers of their whereabouts.

One of the protestors told Amnesty International: “I’m still worried that they are trying to arrest me and accuse me of things I have not committed, because they want me in jail.”

These arrests, which constituted unlawful deprivation of liberty, should immediately be stopped and the authorities must carry out arrests in keeping with their obligations under the international law and standards, including the ICCPR which prohibits arbitrary detention and protects the right to liberty and security of person. The authorities must also end their use of Emergency Regulations, which give sweeping powers to the police and the armed forces to search and make arrests without due process safeguards and have been shown to flout international human rights law.

‘The state does not stand on the side of the people’

Another protestor, who suffered repeated harassment at the hands of the authorities, told Amnesty International: “Many of us got travel bans, and surveillance and tear gas attacks and baton charged and, at times, court orders and imprisonment… The state is always protecting and only defending political power and does not stand on the side of the people.”

Amnesty International calls on the Sri Lankan authorities to drop all charges against those protesters who were participating peacefully in so called “unlawful assemblies”. All those facing such charges must be immediately released. The authorities must also hold prompt, transparent and impartial investigations into all allegations of attacks on peaceful protesters, with support from international observers.

“The relentless repression of the right to freedom of peaceful assembly, movement and expression speaks to Sri Lanka’s legacy of suppressing dissent. Given the immense and historic support for the peaceful protest movement, the Sri Lankan authorities should change course and immediately end their suppression of people’s right to protest,” said Yamini Mishra.

The right to protest is under threat across all regions of the world. Amnesty International’s new global campaign “Protect the Protest” is challenging attacks on peaceful protest, standing with those targeted and supporting the causes of social movements demanding human rights change.