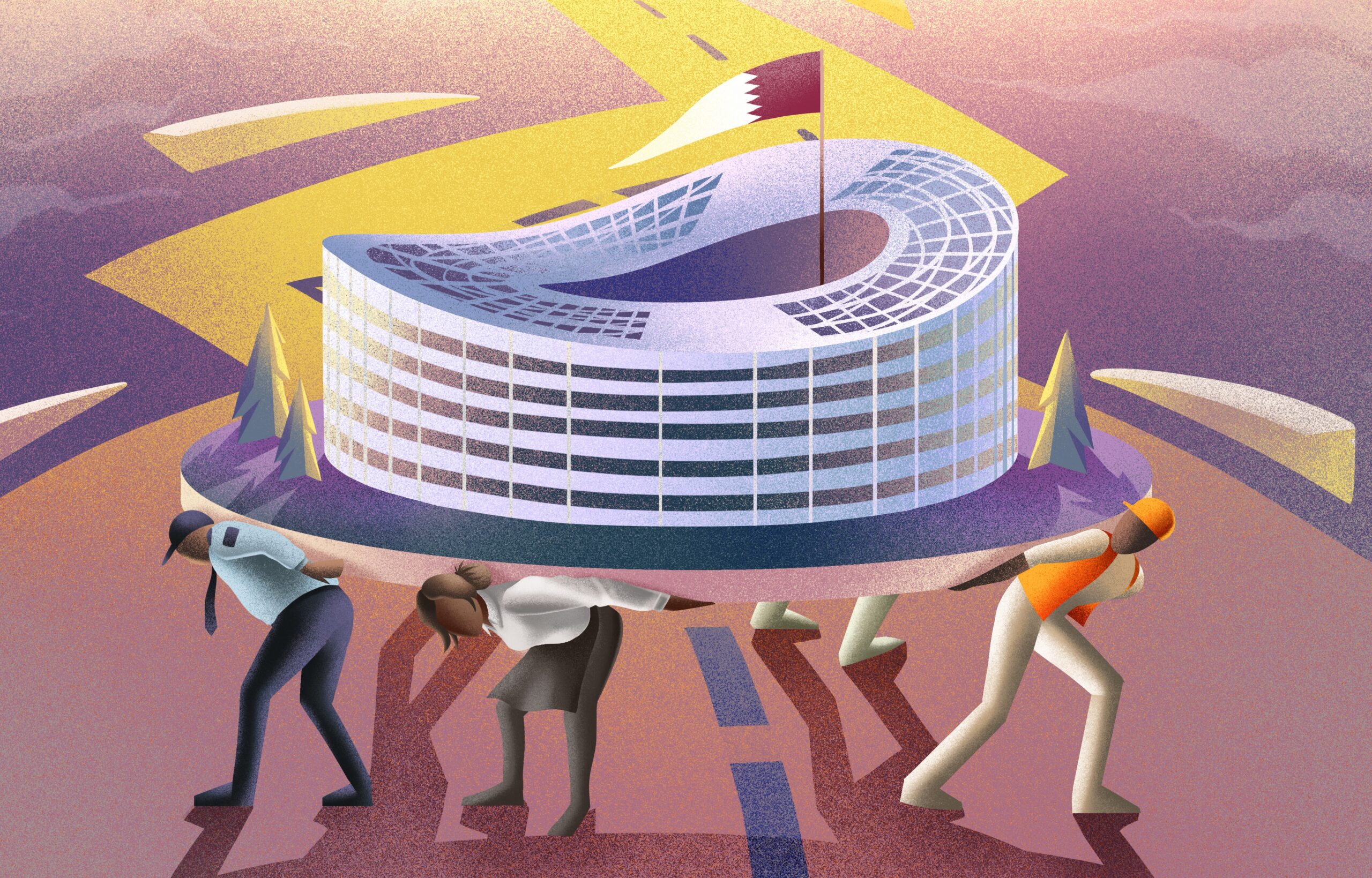 The Qatari authorities must re-commit to fully delivering on promised labour reforms now and beyond the World Cup, Amnesty International said today, as its final pre-tournament briefing on migrant workers’ conditions revealed that abuses remain rife across the country. With just one month until kick-off, the human rights organization again reiterated its call on FIFA and Qatar to establish a compensation fund for abused migrant workers.

Qatar’s overhaul of its labour system since 2017 has led to some noticeable improvements for the country’s two million migrant workers – hundreds of thousands of whom have been engaged in projects essential to the World Cup. However, a lack of effective implementation and enforcement continues to undermine their impact on migrant workers. Thousands of workers across all projects are still facing issues such as delayed or unpaid wages, denial of rest days, unsafe working conditions, barriers to changing jobs, and limited access to justice, while the deaths of thousands of workers remain uninvestigated.

“Although Qatar has made important strides on labour rights over the past five years, it’s abundantly clear that there is a great distance still to go. Thousands of workers remain stuck in the familiar cycle of exploitation and abuse thanks to legal loopholes and inadequate enforcement,” said Steve Cockburn, Amnesty International’s Head of Economic and Social Justice.

“With the World Cup looming, the job of protecting migrant workers from exploitation is only half done, while that of compensating those who have suffered abuses has barely started. It’s also imperative that Qatar commits to improving conditions in the long term. Progress must not grind to a halt once the World Cup roadshow leaves Doha.”

Last month, a global poll commissioned by Amnesty International revealed overwhelming support among both the general public and football fans for the compensation of migrant workers who suffered during preparations for the 2022 World Cup. The findings back the #PayUpFIFA campaign launched by a coalition of human rights organizations—including Amnesty International—fans groups and trade unions in May 2022, which calls on FIFA and the Qatari authorities to establish a comprehensive remediation programme to compensate workers and prevent future abuses.

“Despite huge and growing support in favour of compensating migrant workers among fans, football associations, and sponsors, Qatar and FIFA are still not budging. With only a month to go, time is fast running out for them to do the right thing,” said Steve Cockburn.

“Turning a blind eye to the abuses suffered by thousands of migrant workers over the years flies in the face of their respective international obligations and responsibilities. They must come together to ensure that those who suffered so much to make this tournament possible are not left behind.”

Reforms enacted by Qatar since 2017 include a law regulating working conditions for live-in domestic workers, labour tribunals to facilitate access to justice, a fund to support payment of unpaid wages, and a minimum wage. Qatar has also ratified two key international human rights treaties, albeit without recognizing the right of migrant workers to join a trade union. Qatar’s World Cup organizing body, the Supreme Committee, also introduced enhanced labour standards for workers, but only on official tournament sites such as stadia, although these cover just a small proportion of workers on projects essential to the World Cup, and just 2% of Qatar’s workforce.

While recognising the importance of these reforms, Amnesty’s briefing provides an action plan to address ongoing failings across ten areas. To this end, the organization urges the Qatari authorities to enforce and strengthen labour protections, empower workers, make work pay, and guarantee access to justice and remedy.

Migrant workers on both World Cup and non-World Cup related projects continue to face abuses on a significant scale in Qatar. Many workers, particularly in the domestic and security sectors, continue to be subjected to conditions that amount to forced labour, with domestic workers still typically working between 14 and 18 hours a day without a weekly day off, isolated in private homes.

Security guards are often also repeatedly denied their rest days and forced to work under the threat of penalties, such as having their salaries arbitrarily deducted or sometimes their passports confiscated, despite such practices being in violation of Qatari law. Joshua,* a private security worker from Kenya who recently left Qatar before the end of his contract due to the working conditions, told Amnesty International:

“It was unbearable to stay on in the company I was in due to the treatment and overload of work. In four months, you get just two days off. There’s late salaries and too many fines deducted unnecessarily…The company has withheld my visa such that I can’t go back [to Qatar] if I get a job with another company.”

The deaths of thousands of migrant workers over the past decade and beyond—on World Cup-related projects or otherwise—remain unexplained. At least hundreds of these fatalities were likely a consequence of working in the extreme heat. New heat legislation is an improvement but must be strengthened to bring it into line with international standards and adequately protect outdoor workers. Despite clear evidence that heat stress poses a huge risk to health, the Qatari authorities have done little to investigate, certify or remedy migrant workers’ deaths, contrary to international best practice.

It is not just the devastating emotional impact on victims’ families but also the loss of a family’s main breadwinner coupled with the lack of financial compensation that leaves many in even deeper poverty. Bhumisara,* whose husband’s death in Qatar remains unexplained, told Amnesty:

“Now everything is shattered… Life itself has become like a broken mirror…I have cried many times in emotion. Being alone is very difficult…I feel like I’m burning in oil.”

Migrant workers remain unable to form or join trade unions in Qatar, contrary to their fundamental right under international law to do so. Instead, Joint Committees formed and led by employers, cover only 2% of the workforce. These committees provide workers with some representation, yet remain beset with serious flaws, as they lack mechanisms for collective bargaining and fail to provide workers with crucial legal protections.

The payment by prospective migrant workers of extortionate recruitment fees to secure jobs in Qatar remains rampant. Fees of between US$1,000 and US$3,000 leave many workers needing months or even years to repay the debt, trapping them in cycles of exploitation. While workers on some World Cup projects under the purview of the Supreme Committee, Qatar’s tournament organizers, are able to claim some reimbursement of these fees, this option is unavailable to the vast majority of workers in the country.

Crucial changes to the kafala system—which made workers entirely dependent on their employer—mean the vast majority of migrant workers are now legally able to leave the country and change jobs without permission. Migrant workers, however, still risk being arrested or deported if their employers cancel their visas, fail to renew their residence permit or report them as having ‘absconded’ from their job.

Despite the government saying that it approved more than 300,000 migrant worker job transfer applications since October 2020, Amnesty International has documented several cases over recent months in which unscrupulous employers used their powers to cancel visas, renew residence permits and report workers for ‘absconding’ to exploit and punish those who complained about working conditions or wanted to change jobs. For instance, in one case, Geoffrey*, a delivery driver who complained to the Ministry of Labour about withheld wages and a lack of food and sanitary accommodation, was detained by police on “runaway” charges and held for three weeks.