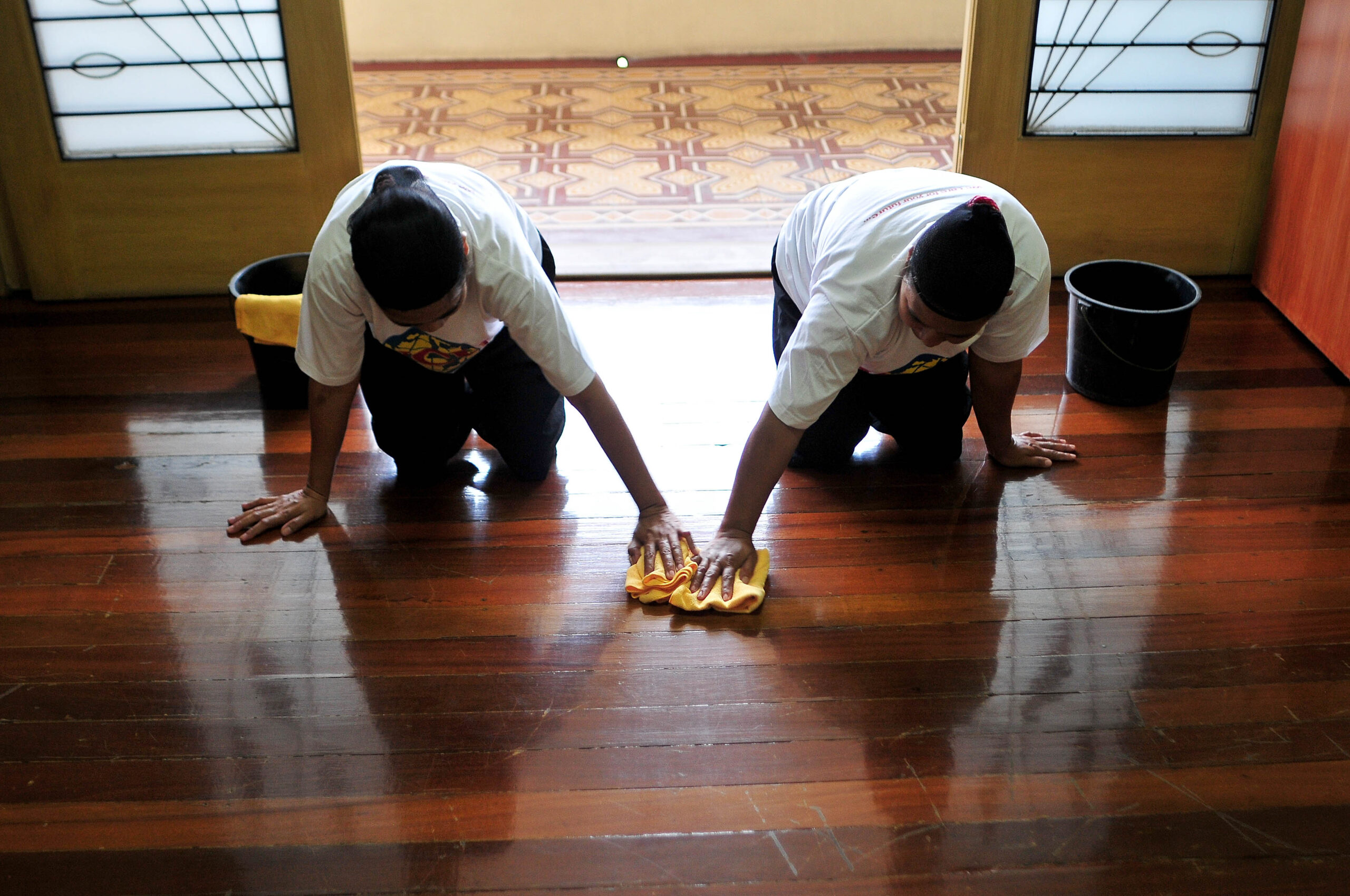 A new report by Amnesty International reveals how migrant domestic workers employed in Qatar have been pushed to breaking point by extreme overwork, lack of rest, and abusive and degrading treatment. The organisation spoke to 105 women who had been employed as live-in domestic workers in Qatar and found that their rights were still being abused and violated despite government reforms aimed at improving their working conditions. Some women said they had been victims of serious crimes such as sexual assault.

In 2017 Qatar introduced the Domestic Workers Law, which stipulated limits on working hours, mandatory daily breaks, a weekly day off and paid holidays. Three years on, 90 of the 105 women contacted by Amnesty said they regularly worked more than 14 hours per day; 89 regularly worked seven days a week; and 87 had their passport confiscated by their employers. Half of the women worked more than 18 hours per day, and most had never had a single day off at all. Some also reported not being paid properly, while 40 women described being insulted, slapped, or spat at. One woman said she was treated “like a dog”.

“The introduction of the 2017 Domestic Workers Law was a step forward for labour rights protection in Qatar. Sadly, the accounts of the women we spoke to make it clear that these reforms have not been properly implemented or enforced,” said Steve Cockburn, Head of Economic and Social Justice at Amnesty International.

“Domestic workers told us they were working an average of 16 hours a day, every day of the week, far more than the law allows. Almost all had their passport confiscated by their employers, and others described not getting their salaries and being subjected to vicious insults and assaults. The overall picture is of a system which continues to allow employers to treat domestic workers not as human beings but as possessions.”

There are around 173,000 migrant domestic workers in Qatar. Some of the women Amnesty International interviewed were still in their jobs. Others had left but remained in Qatar, and others had returned to their home countries. Like the women themselves, the employers they described were from many different countries. All names have been changed to protect identities.

The abuses documented in the report are fostered by a combination of factors, including the lack of inspection mechanisms to ensure compliance with the Domestic Workers Law, and aspects of Qatar’s Sponsorship system which continue to give employers excessive powers over their employees. Many women face obstacles reporting abuse and criminal acts to authorities, and there is widespread impunity.

Most recently it introduced a minimum wage and abolished the requirement for workers to obtain their employers’ permission to change jobs or leave the country. While these legal changes may make it easier for workers to escape exploitative employers, they are unlikely to significantly reduce abuse or improve domestic workers’ conditions without additional measures to strengthen protections and ensure enforcement.

Long working hours with no proper rest emerged as one of the most common forms of abuse experienced by domestic workers. According to their contracts, domestic workers should work no more than 10 hours a day, six days a week. This is already higher than standards set out by the International Labour Organisation, but most women Amnesty spoke to were working far more than this.  On average they worked 16 hours per day, usually without a day off, amounting to 112 hours per week – without being paid any overtime. This means most women were working nearly double their contracted hours.

Reina*, a 45-year-old Filipino woman, described how she had a car accident because she had only had two hours sleep:

“I went to sleep at 1am, and at 3am the 17-year-old daughter woke me up asking me to go and buy her a Red Bull. Then at 5.30am I started my usual working day, washing the car and preparing to drive the kids to school… at 10pm I crashed the car into the wall.”

The Domestic Workers Law limits working hours to a maximum of ten hours a day, but allows for this to be extended if agreed by the worker. The inherent power imbalance arising from the dependency of domestic workers on their employers leaves this loophole open to abuse. Many women said they felt scared to refuse their employers’ endless requests, even when they needed to rest.

At least 23 women interviewed said they were not given enough food and felt hungry during their employment in Qatar. Some women interviewed also described sleeping in cramped rooms, in some cases on the floor or without air conditioning. Accounts of poor living conditions highlight the Qatari authorities’ failure to conduct workplace inspections.

Amnesty International spoke to 40 women who said they had suffered verbal and physical abuse. Often this involved degrading treatment, shouting and insults.

Fifteen women said they faced physical abuse at the hands of their employers or family members, including spitting, beating, kicking, punching and hair-pulling.

“Madam started shouting at all [the maids]… she started spitting on us and slapped me again… Before this incident she also kicked me on my back.”

Five women said they had been sexually abused by their employers or visiting relatives. The sexual abuse ranged from harassment to fondling and rape. Most women felt they could not complain to the police for fear of retaliation by their employers.

One woman, Julia*, did report sexual abuse to the police. The son of Julia’s employer visited the house one day and attempted to rape another woman working in the house. The man offered the women money to keep quiet, but they decided to go to the police.

The police investigator who looked into the allegations accused Julia and her friend of “making up stories” and dropped the case. In the end their employer bought them tickets home, in exchange for the women signing a statement which was written in Arabic and they did not understand.

Qatar has utterly failed to hold abusive employers to account, which means there is little to deter future abuses. Practices such as passport confiscation and unpaid wages, which indicate forced labour, are not being automatically investigated, and rarely face consequences even when they refuse to hand passports over or pay dues.

“None of the women Amnesty spoke to has seen their abuser held to account for their actions. If Qatar wants to protect domestic workers from exploitation, it needs to send a strong message to employers that labour abuses are not tolerated,” said Steve Cockburn.

Prior to 2018 domestic workers had no access to grievance mechanisms, but when Qatar established the Committees for the Settlement of Labour Disputes, they were finally allowed to submit complaints to these tribunals. However, the process remains beset with delays and other issues.

More than half the women Amnesty spoke to reported delayed or unpaid wages, but the very few who felt able to submit claims to the Committees found the process slow and stressful.

One major flaw in the system is that domestic workers risk losing their legal status, income and a place to stay while their complaints are processed. They need a safe refuge and income to support themselves during the process; however, with a government-run shelter not fully operational, complaining at the Committees is not a viable option for most women.

In addition, women who leave their jobs could face retaliation measures from their employers and be charged with “absconding” or other offences, which carry criminal penalties. At least 10 women Amnesty spoke to were accused of theft and 13 others had an “absconding” case filed by their employers. All women denied the charges and felt that these cases were filed in relation of them fleeing abuses.

Cases of physical and sexual abuse are dealt with by criminal courts, but the fact that domestic workers are dependent on their employers for shelter and legal status, coupled with lack of trust in the system, is an obvious deterrent to reporting. Consequently, serious crimes are going unpunished.

“Domestic workers deserve a say in the laws and policies that affect their lives. The women we spoke to were resilient and independent – they had left their homes and travelled halfway across the world. Instead of being isolated and silenced, these women should be given a voice so they can advocate for their rights,” said Steve Cockburn.

“We are calling on the Qatari authorities to take concrete steps to ensure full implementation of the law, establish strict inspection mechanisms, and take serious actions against abusive employers. Despite efforts to reform labour laws, Qatar is still failing the most vulnerable women in the country.”

The State of Qatar response to Amnesty International’s requests for information is reflected in the report.

As a party to various international treaties prohibiting human rights abuses including the recent ratification of the International Covenants on Civil and Political Rights (ICCPR) and on Economic, Social and Cultural Rights (ICESCR), Qatar is obliged to protect all workers, including domestic workers living and working in its territory and should provide remedies when those rights are being violated.