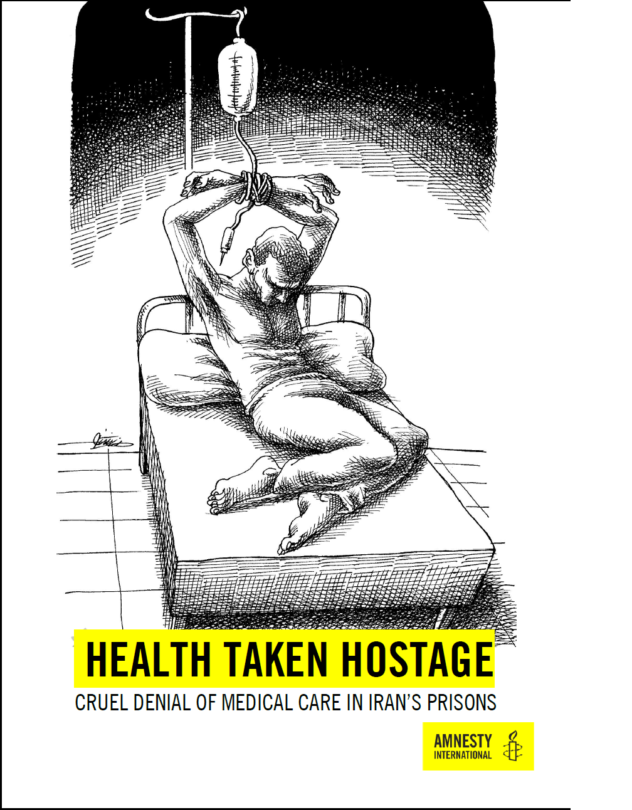 Iran’s authorities are callously toying with the lives of prisoners of conscience and other political prisoners by denying them adequate medical care, putting them at grave risk of death, permanent disability or other irreversible damage to their health, according to a new report by Amnesty International published today.

The report, Health taken hostage: Cruel denial of medical care in Iran’s prisons, provides a grim snapshot of health care in the country’s prisons. It presents strong evidence that the judiciary, in particular the Office of the Prosecutor, and prison administrations deliberately prevent access to adequate medical care, in many cases as an intentional act of cruelty intended to intimidate, punish or humiliate political prisoners, or to extract forced “confessions” or statements of “repentance” from them.

“In Iran a prisoner’s health is routinely taken hostage by the authorities, who recklessly ignore the medical needs of those in custody. Denying medical care to political prisoners is cruel and utterly indefensible,” said Philip Luther, Director of Amnesty International. “Prisoners’ access to health care is a right enshrined in both international and Iranian law. When depriving a prisoner of medical care causes severe pain or suffering and it is intentionally done for purposes such as punishment, intimidation or to extract a forced ‘confession’, it constitutes torture.”

In Iran a prisoner’s health is routinely taken hostage by the authorities, who recklessly ignore the medical needs of those in custody. Denying medical care to political prisoners is cruel and utterly indefensible

The report details 18 appalling cases of prisoners who have been denied medical care in some form and are at risk of suffering permanent damage to their health.

Prisoners subjected to a shocking range of abuses

The report provides a deeply disturbing image of the Office of the Prosecutor, which in Iran is responsible for decisions concerning medical leave and hospital transfers. The Office of the Prosecutor often refuses to authorize hospital transfers for sick prisoners even though the care they need is not available in prison, and denies requests for medical leave for critically ill prisoners against doctors’ advice.

Amnesty International’s research found that in some cases prison officials had also violated prisoners’ rights to health, or were responsible for torture or other ill-treatment. In several cases, they withheld medication from political prisoners or unnecessarily used restraints such as handcuffs and leg shackles on political prisoners, interfering with their medical treatment, bruising theirs hands and feet or causing them discomfort and humiliation.

Prisoners interviewed by Amnesty International also said that prison doctors were sometimes complicit in the abuse. They said some prison doctors consistently downplayed or outright dismissed their health problems as “figments of their own imagination” and treated serious conditions with painkillers or tranquillizers.

The report reveals that women political prisoners, at least in Tehran’s Evin Prison where the clinic is entirely staffed by male doctors and nurses, face additional barriers to accessing medical care. On several occasions women prisoners, who experienced health problems, were denied emergency medical tests or other treatment because it was deemed inappropriate for them to be treated by male medical staff. Women were also subjected to sexual slurs and harassment for failing to comply with strict veiling regulations.

“The Iranian authorities and in particular the prosecution authorities have displayed a chilling ruthlessness in their attitude towards sick prisoners. They are toying with individuals’ lives with devastating, lasting consequences to their health,” said Philip Luther.

The Iranian authorities and in particular the prosecution authorities have displayed a chilling ruthlessness in their attitude towards sick prisoners.

“Iran’s authorities must immediately stop using the denial of medical care as a form of punishment or coercion and ensure all people in custody are able to access adequate health care without discrimination.”

Zeynab Jalalian, an Iranian Kurdish woman serving a life sentence in connection with her alleged membership of a Kurdish opposition group, is at risk of going blind because her treatment has been withheld. Her family believe she was injured when interrogators repeatedly hit her head against the wall, fracturing her skull causing a brain haemorrhage and vision impairment. She urgently needs an eye operation but the authorities have repeatedly refused to authorize her transfer to a hospital. Intelligence officers have told her she would first have to provide “confessions”.

“They said that if she did so, they would not only reduce her sentence but also take her to a doctor,” her sister, Deniz Jalalian, told Amnesty International.

“Making medical care conditional on obtaining a statement of ‘repentance’ or a ‘confession’ is not only a shameful exploitation of a prisoner’s poor health but also a clear violation of the absolute prohibition of torture and other ill-treatment,” said Philip Luther.

Prisoner of conscience Omid Kokabee, a 33-year-old physicist serving a 10-year sentence for refusing to work on military projects in Iran, complained of kidney problems for nearly five years but the authorities ignored his repeated requests for medical care. In April 2016, he was diagnosed with advanced kidney cancer and had to undergo emergency surgery to remove his right kidney.

“He had been waiting for a long time to be transferred to a hospital… but the officials wouldn’t agree to it. Prison doctors never even examined him, and kept prescribing painkillers for him,” a family member said.

A photograph which recently emerged showing Omid Kokabee chained to his hospital bed when he was hospitalized on a previous occasion in 2015 caused an outcry on social media.

Afshin Sohrabzadeh, an Iranian Kurdish political prisoner serving a 25-year prison sentence, was also repeatedly denied the specialized treatment he urgently needed for an intestinal cancer which resulted in severe and frequent gastrointestinal bleeding. The authorities also made his medical leave conditional on an extortionate bail amount.

“If you cannot provide a property bond for your medical leave that is not a problem. We will send your body to a mortuary and your mother and father can go and pick it up,” Afshin Sohrabzadeh was apparently told.

If you cannot provide a property bond for your medical leave that is not a problem. We will send your body to a mortuary and your mother and father can go and pick it up

On 25 June 2016 he was finally granted temporary medical leave. However, he remains unable to fund his treatment because the intelligence authorities have confiscated his national identification documents, preventing him from applying for government-subsidized health care.

The case of Afif Naimi, a prisoner of conscience and one of seven imprisoned leaders of Iran’s Baha’i community serving a 10-year prison term, is another shocking case. He suffers from a severe blood clotting disorder, which requires regular, specialized medical care not available in prison. The condition can be fatal if left untreated. He has been deemed unfit for imprisonment by medical professionals several times but despite this the Office of the Prosecutor has refused to release him on medical grounds. While in prison, he has suffered recurrent bleeding and loss of consciousness, resulting in his frequent hospitalization.

Many political prisoners suffering from health conditions have felt that they have had no choice but to go on hunger strike to compel the authorities to provide them with medical care. Hunger strikes are usually greeted with indifference but in some cases the authorities have eventually granted the hunger striker short-term medical leave, then forced them to interrupt their treatment by returning them to prison after a brief period against medical advice.

In some cases prisoners were punished for going on hunger strike. Prisoner of conscience Alireza Rasouli, who is serving a three-and-a-half-year prison sentence, was sentenced to three additional years after he was convicted of national security charges such as “spreading propaganda against the system” including through staging hunger strikes. He suffers from a bone disease in his leg, which has deteriorated because it was left untreated, causing him severe pain and restricting his ability to move. He now requires surgery outside of prison to prevent potentially permanent joint damage.