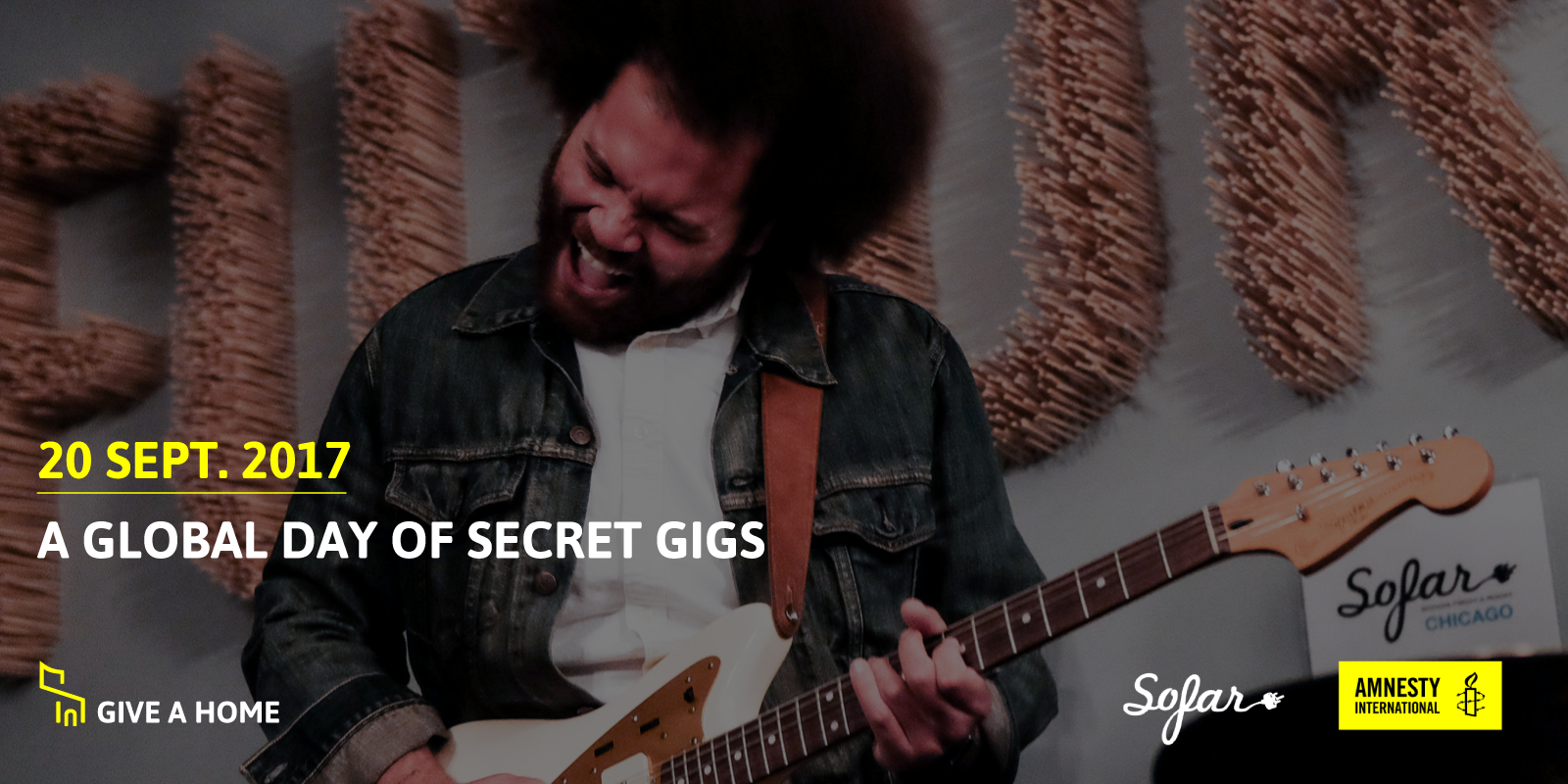 ‘Give a Home’: Massive global concert series will show solidarity with refugees

1,000 musicians to play at Amnesty International and Sofar Sounds events globally in September.

Jessie Ware, Oh Wonder and Tom Odell will be among a thousand musicians performing in people’s homes in more than 200 cities globally for a first-of-its-kind day of concerts to unite people in welcoming refugees, Amnesty International and Sofar Sounds announced today, marking World Refugee Day.  The new concert series, called Give a Home, will take place on 20 September 2017 and will bring established and emerging artists together with refugees and local communities at over 300 shows in more than 60 countries around the world. Partners VICE and Facebook Live will promote and live-stream the concerts globally.

“With more than 21 million people forced to flee their home country, the world refugee crisis is one of the defining issues of our era. How we respond to it now will shape who we are for generations to come. This is our moment to defend the things that unite us and refuse to let fear and prejudice win. Music and art have always been powerful partners to the cause of justice because they share an ability to stir something deep within us. They help us to look beyond borders and see what unites us.

That is why this World Refugee Day we are announcing the Give a Home concerts. The shows will be an opportunity to reflect on our shared humanity and strengthen our resolve to tackle this unprecedented humanitarian challenge,” said Colm O’Gorman, Executive Director of Amnesty International Ireland.

Music fans around the world will be opening up their homes – the locations of which will be secret until closer to the day of the gigs – to host the concerts. Each event will feature performances from two to three music artists, as well as talks from activists to highlight the solutions people are working on to address the refugee crisis. The concert series is a collaboration between Amnesty International, the world’s largest human rights organization, and Sofar Sounds, a London-based company that specializes in throwing secret concerts in people’s homes all over the world. Sofar Sounds have previously hosted shows in venues ranging from back gardens in Cape Town to Cliffside lairs in Los Angeles, greenhouses in Tokyo, lofts in London, mansions in Mumbai, outback farms in Melbourne and converted schoolhouses in São Paulo.

“Give a Home aligns Amnesty International and Sofar’s vision of a global community united by the things that really matter, in the same way that Sofar unites thousands of people all around the world every day through a shared love of music. On 20 September, the global music community will come together like never before to celebrate a more hopeful narrative, one that champions and celebrates the fundamental equality and dignity of all human beings,” said Rafe Offer, co-CEO of Sofar Sounds.

Fans will be able to apply for tickets from today – World Refugee Day – via: sofarsounds.com/giveahome. From the site, people will be able to select their city and the event of their choice to be in with a chance of winning two tickets. They will have the option of making a donation when applying for tickets. The funds raised by the project will support Amnesty International’s work in documenting human rights abuses and violations against refugees and pushing governments to find a sustainable solution to the refugee crisis.

The refugee crisis affects the lives of more than 21 million people worldwide. Almost all are hosted outside the wealthiest nations, which simply aren’t doing their fair share to help. Currently just 10 of the world’s 193 countries host more than half its refugees. Amnesty International’s ‘I Welcome’ campaign calls on all governments to do more to ensure refugees are protected and able to enjoy their human rights, including by expanding safe and legal routes through which refugees can reach shelter, exposing deterrence policies that negatively impact the rights of refugees and ending the practice of detaining and returning refugees to places where they will be at risk. The campaign also aims to build grassroots solidarity with refugees, including through community-led programmes to sponsor refugees.