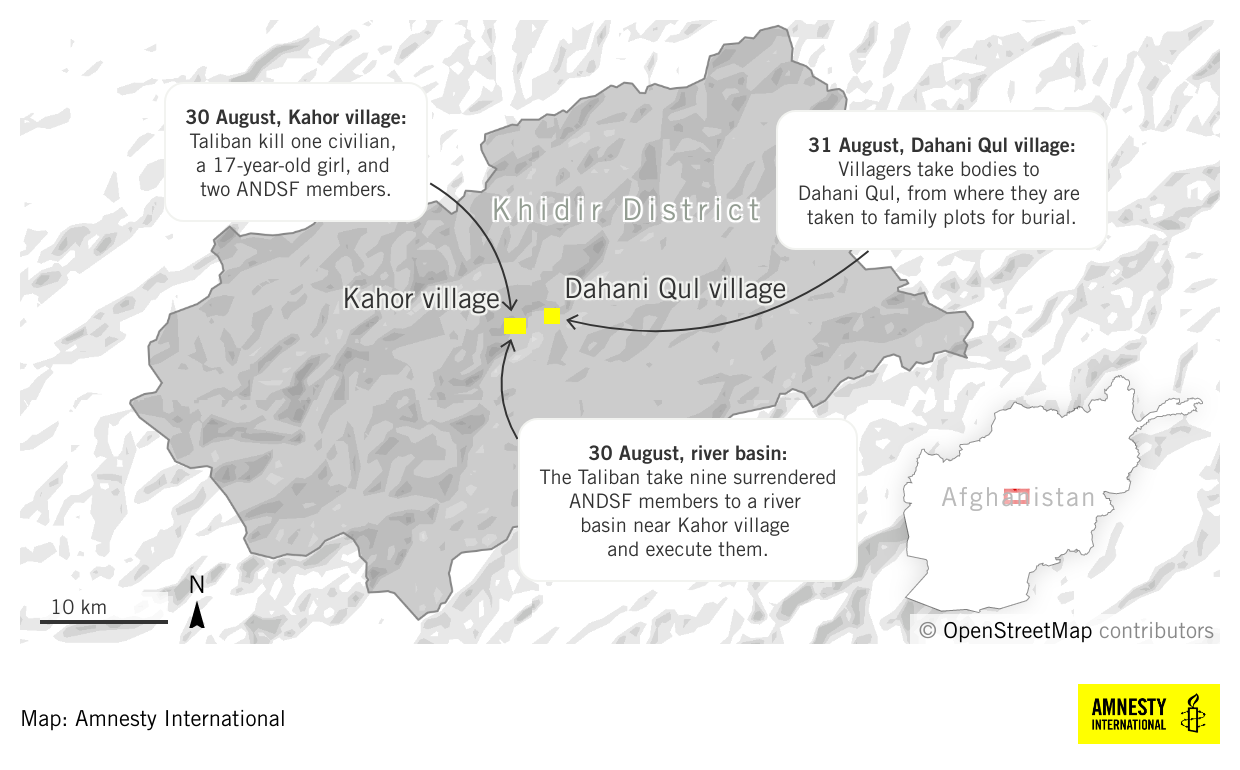 Taliban forces unlawfully killed 13 ethnic Hazaras, including a 17-year-old girl, in Afghanistan’s Daykundi province after members of the security forces of the former government surrendered, a new investigation by Amnesty International has revealed.

The killings happened in Kahor village of Khidir district on 30 August. Eleven of the victims were former members of the Afghan National Defence Security Forces (ANDSF), and two were civilians.

According to eyewitness testimony gathered by Amnesty International, the Taliban extrajudicially executed nine of the ANDSF members after they had surrendered, killings that appear to be war crimes. Two civilians were killed as they attempted to flee, including a 17-year-old girl shot when the Taliban opened fire on a crowd of people.

Amnesty International verified photographs and video evidence taken in the aftermath of the killings, and identified the location of Kahor village, where they happened.

“These cold-blooded executions are further proof that the Taliban are committing the same horrific abuses they were notorious for during their previous rule of Afghanistan,” said Agnès Callamard, Amnesty International’s Secretary General.

“They repeatedly violate the rights of those they perceive as their adversaries, even killing those who have already surrendered. The Taliban say they are not targeting former employees of the previous government, but these killings contradict such claims.

“The Taliban must immediately cease these cruel acts of revenge, and ensure employees of the former government and their families can live safely in Afghanistan. The new government must make clear that such grave violations will not be tolerated, and that those responsible will be prosecuted.”

Verifying human rights abuses committed by the Taliban since they took control of Afghanistan in August 2021 has proven difficult, as the group have cut mobile phone service in many regions. Shortly after the fall of Kabul, Amnesty International documented how Taliban fighters massacred nine ethnic Hazara men after taking control of Ghazni province.

The Taliban took control of Daykundi province on 14 August. An estimated 34 former ANDSF members initially sought safety in Khidir district, and had government military equipment and weaponry with them. They then agreed to surrender to the Taliban as the group established its authority over vast swathes of the region.

Mohammad Azim Sedaqat, who was leading the surrender, arranged to decommission the group’s weapons in the presence of the Taliban. On 29 August, the men negotiated to surrender fully to the Taliban.

On 30 August, an estimated 300 Taliban fighters arrived in convoy close to Dahani Qul village, where the ANDSF members were staying, some with family members. As the ANDSF members attempted to leave the area with their families, one vehicle remained stuck close to Kahor village.

When the Taliban fighters caught up with them, they opened fire on the crowd and killed the 17-year-old girl, called Masuma. One of the ANDSF members then fired back, killing one Taliban fighter and wounding another.

The Taliban continued to shoot as the families fled, killing two ANDSF members fleeing the scene. After nine more ANDSF members surrendered, the Taliban promptly took them to a nearby river basin and executed them.

Videos and photographs reviewed by Amnesty International show the corpses of 11 men lined up, with many showing bullet wounds to their heads. One video shows a body being carried up an incline, believed to be at the river basin near Kahor. Amnesty International has been unable to independently geolocate this video, but its content is consistent with eyewitness testimony describing the location as close to Kahor.

Aftermath of the killings

On 31 August, the day after the killings, villagers took the bodies to Dahani Qul, where they were then brought to family plots for burial. Amnesty International reviewed and verified information confirming the locations of two of the graves, and the identities of the people buried there.

The Taliban then told remaining family members that anyone who had fled should return, and surrender within three days. Interviewees told Amnesty International that one senior Taliban official warned: “I have killed people for the past 20 years. Killing is easy for me. I can kill again.”

On 1 September, Sadiqullah Abed, the Taliban-appointed chief of police for Daykundi province, denied any killings had happened and instead only confirmed that a member of the Taliban had been wounded in an attack in Daykundi.

The Taliban seized power in Afghanistan following the collapse of the government in mid-August 2021. Amnesty International has called for the protection of thousands of Afghans at serious risk of Taliban reprisals, from academics and journalists to civil society activists and women human rights defenders.

In a recent briefing, Afghanistan’s fall into the hands of the Taliban, Amnesty International detailed a litany of human rights abuses committed by the Taliban, including targeted killings of civilians and surrendered soldiers, and the blockading of humanitarian supplies, which constitute crimes under international law.