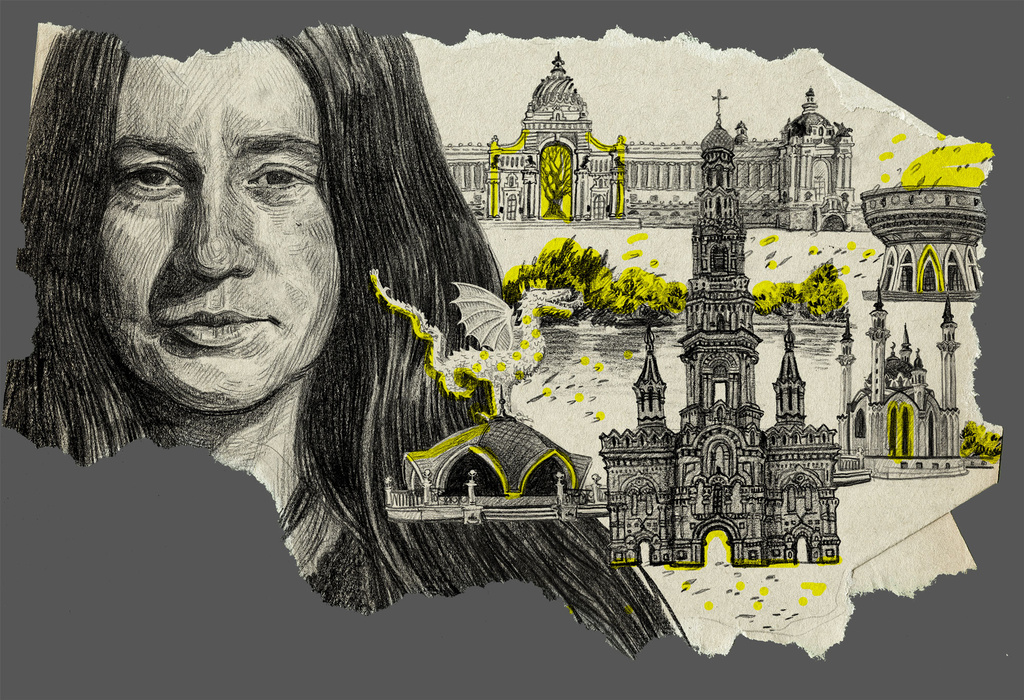 Yulia Faizrakhmanova, coordinator of the movement “Volga and People Are Against” (Kazan)

Yulia peacefully protests against the destruction of natural environments in Russia.

Last year, a four hectare (10 acres) parking lot for the FIFA World Cup was built on the Kazanka River banks. However, it was unused during the Confederations Cup, another international football tournament played in 2017. Before the parking lot was built, the place was an area of natural beauty where magpies sang, stoats fed, hares ran, and old tall trees and rare plants grew. Just two days before the area was destroyed in November 2016, we had discovered some giant reed plants there.

We protested peacefully against the construction of the parking lot, we parked our cars at the curb and spent three days standing there, day and night in the cold. We tried to block what was at that time the illegal construction of the parking lot. There were 15 of us. “Fifteen Spartans”, we used to call ourselves. And 15 more brought us food and hot coffee. It was around the November holidays, and it was chilly. We were watching this world of nature about to be destroyed and buried by heavy machinery. We blocked their way, stopped the construction, and prevented KAMAZ trucks from filling the area with sand. We knew that this construction was just the beginning of further destruction of the “green lungs” of the Kazan’s Novo-Savinsky district.

The next stage of the construction is about to start. They will wait until the World Cup is over so that local residents, unwilling to lose this natural area, do not protest in front of international TV cameras and embarrass the authorities. This new construction will proceed with the destruction of another four hectares (10 acres) of natural beauty. But I am sure that this time more locals will protest. Since the project began, more information about the imminent construction in the narrow area that runs from the Kazan Arena, for3 km down to the Kazanka River, has spread among the residents of the Novo-Savinsky district. This natural strip consists of streamside woods, flood-meadows, and shallow waters inhabited by many species of animals, birds and plants, and the risks to it are evident if the construction goes ahead.

We fight for the preservation of nature in Zaimishche, the floodplain meadows of the Volga river just 20 kilometres from Kazan downtown. Local residents have always drunk water from the Zaimishche meadows. When I was a child, my dad and I used to go fishing there. We cycled from our summer cottage which was some 7 km away. My whole childhood I enjoyed these tall grasses and the beautiful sunsets. In 2012, I discovered that this site was listed for urban development. Back then, I was a journalist at the Vechernyaya Kazan, one of the few opposition media outlets. I talked to the officials and to the CEO of the construction company that was developing the area, and I realized that you to have an impact in Tatarstan you can do nothing with your journalism alone. We tried to get inside the construction zone, an area that had once consisted of open islands, small peninsulas and creeks, where people had always gone fishing and kids from local villages had been playing all day long, only to find it heavily guarded, with dogs and barbed wire. The site started to change: where there had been land, water appeared, and vice versa.

There were multiple protests in Kazan in 2012 with up to a thousand participants, but the authorities just ignored their claims. The protests were not banned or dispersed, no one was arrested and the authorities allowed the press coverage to go without interference. Despite that, there was no response at all from the authorities — people were wasting their breath. The construction went on for two years, and a large area was filled with sand. The filling was done during the spring.

In 2014, the construction moved closer to the riverside villages, and huge 18-metre deep pits appeared in place of the warm bays kids had used to splash in. When people saw these disastrous things happening right at their doorstep, they got angry and stopped thinking about the possible consequences, even if that meant police harassment and prosecution. The moment the local residents in Oktyabrskoe saw up to 50 owls sitting in the broad daylight in the trees displaced by the shore deposition, they realized that they had to take to the streets.

Between 600 and 1,000 people attended the “People’s Gathering” on 9 May 2014. Some of them tried to block one lane of the federal road. Truck drivers learned what was going on and honked in support, or stopped their vehicles and offered to help to completely block the road. But we asked them to go on. However, we did approach the dredge ships and asked them to stop working. In reply the captains stopped the work because all these ships belonged to the oldest river fleet company in Tatarstan: Tatflot. They love the Volga and are real ‘Volgars’, the people of the Volga river. When they took their jobs on the dredgers, they did not expect to be filling shallow waters with sand, it seemed they liked the idea of shutting down the project to protect this natural area. I saw the bravery of these people and realized that they were the real power.

Now local residents bring their tractors there, and pay out of their own pockets to dig the channels back so that the water can stream freely. But making channels is not enough. The deepest and most dangerous pits have to be filled and evened out. Behind one of the hills, there is a small bay that in the summer is a couple metres deep. There are plenty of plants and animals there, including rare frogs, birds, flowers and yellow water-lilies. Water covered with duckweed and other aquatic plants shimmers like stars with amphibian roe. That is what the tiny lakes that have now been filled with sand used to look like.

We are working to have a natural park there. You see this beauty around you and understand that this area must be preserved. The islands in the distance should become a sanctuary for birds and animals. Some spots must be cleared from sand, channels should be deepened, and water must be directed to the aggradation sites. The area, with its amazing sunsets, is suitable for ecotourism and camping. This place is not far from the city. Meanwhile, Tatarstan lacks parks that could act both as a wildlife sanctuary and a nature tourism destination.