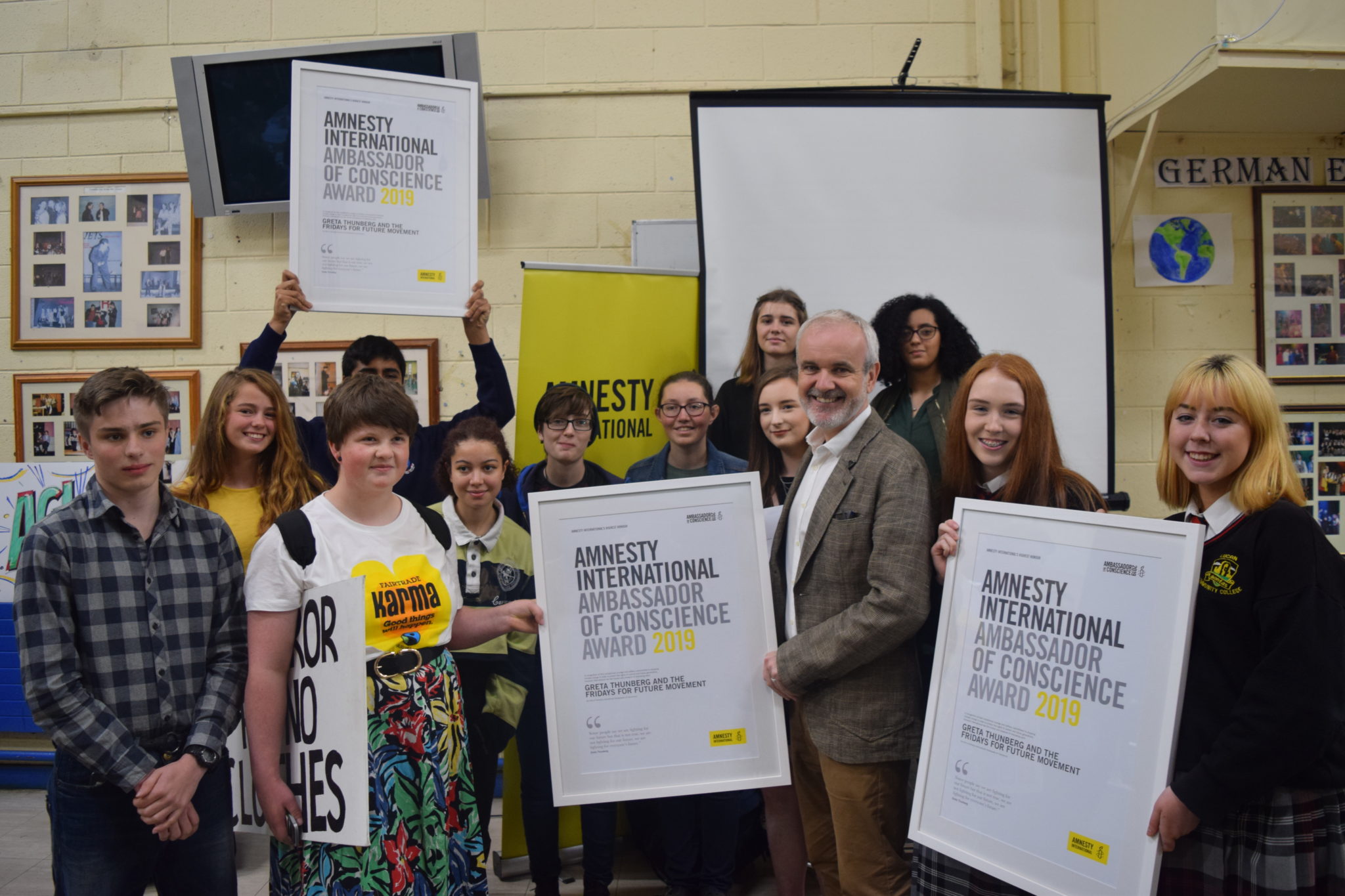 Today in Washington DC, Amnesty International will be awarding its Ambassador of Conscience Award for 2019 to Greta Thunberg and Fridays for Future, to honour the movement of school strikers and young climate activists that has mobilised more than one million young people from all over the world. The award will be presented by Amnesty International’s Secretary General, Kumi Naidoo.

Amnesty International is also presenting the award on the same day to other representatives of the movement in cities around the world, including in Ireland.

This morning, Executive Director of Amnesty Ireland, Colm O’Gorman, presented the award to representatives in Ireland at a ceremony in Lucan Community College, Dublin. The representatives included the groups Fridays for Future, School Strikes 4 Climate and Schools Climate Action Network, whose members travelled from across Ireland to be here today.

“The Ambassador of Conscience is awarded to recognise the courage and leadership of human rights defenders. The change that these young climate activists have made in such a short space of time is incredible and awe-inspiring,” said Colm O’ Gorman.

“15,000 young activists took to the streets in Ireland last March to demand we take real action on the climate emergency. They will march again on the 20 September as part of the global climate strike, with the full support of Amnesty International.

“The young climate activists represented here today not only deserve the honour of this award, but they need us to hear their message and take action. No more excuses – world leaders have to recognise what is at stake. These school children are literally fighting for their futures, and for the millions of people around the world who are suffering right now.”

Saoi O’Conor was one of the representatives of the Fridays for Future movement, who travelled from Cork to attend the ceremony. She said:

“It’s an honour to receive this award from Amnesty International. Climate change is a human rights issue and what we’re doing is calling on the government to do what they’re meant to; to uphold our human rights.”

“I don’t even have time to worry about my future, even though of course I’m scared. But the climate crisis is happening right now. I’m worrying about the people I’m talking to and working with in places like Mozambique, the Amazon and all around the world, who are on the frontlines already.”

Amber and Allie, students at Lucan Community College and members of their school’s Climate Action group, said that the presenting of the award to young activist groups was well deserved.

“When we heard these hard-working people were getting the recognition they deserved, we were over the moon. Thanks to them, people are becoming more and more educated about the climate crisis. They inspired us and many others to act and raise awareness on a local and global level and are really making a change.”

This award was presented ahead of the Peoples’ Summit on Climate, Rights and Human Survival Summit, co-organised by Amnesty International. The event will welcome a considerable number of youth leaders and aims to galvanize the human rights community to urgently scale-up its efforts on climate justice.

The Ambassador of Conscience Award was founded in 2002 to celebrate individuals and groups who have furthered the cause of human rights by acting on their conscience, confronting injustice and using their talents to inspire others. Previous awardees include Nelson Mandela, Malala Yousafzai, Harry Belafonte, Ai Weiwei, the Youth Groups of West and Central Africa, Angélique Kidjo, the Indigenous rights movement in Canada, Alicia Keys and Colin Kaepernick.