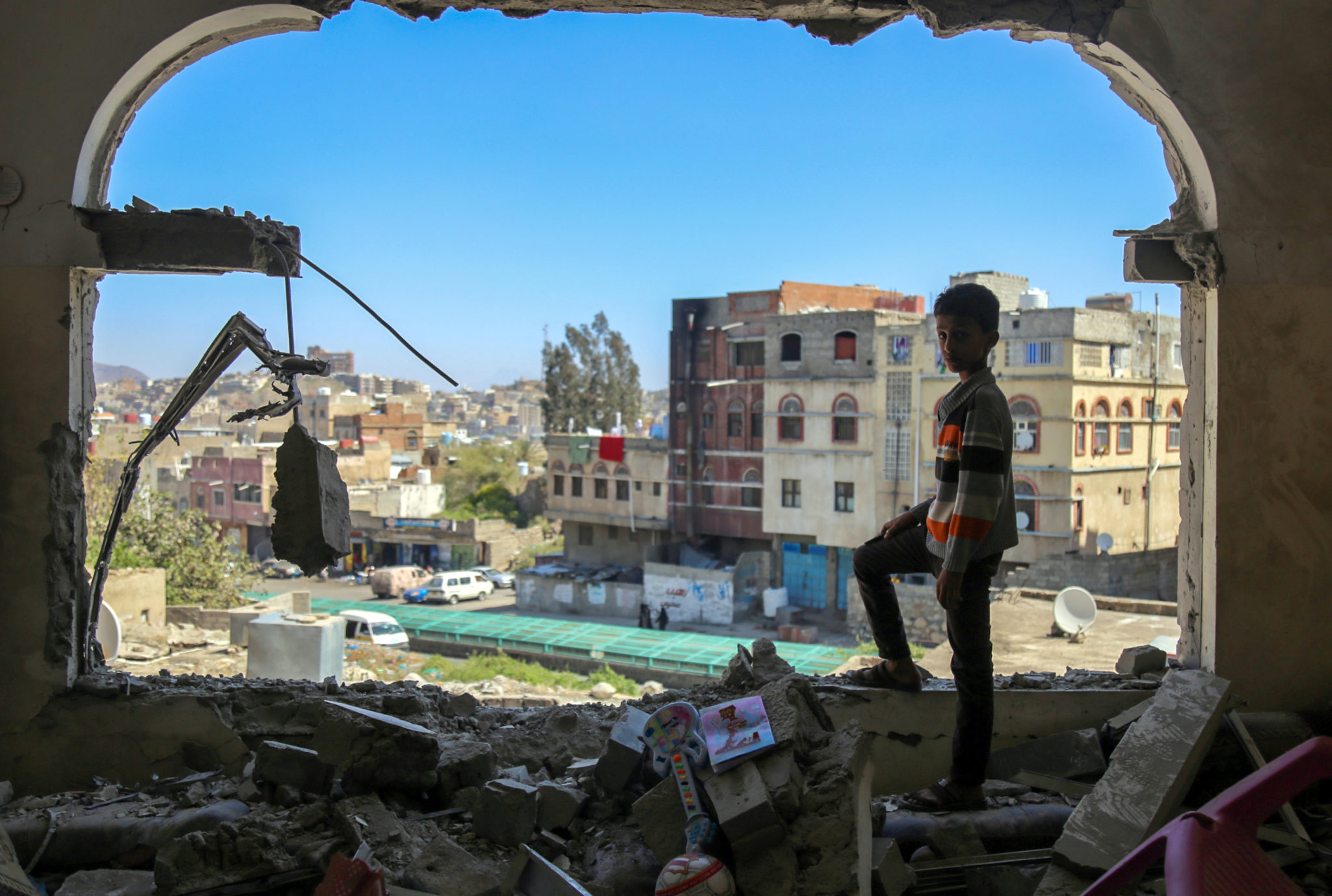 A Saudi Arabia-led coalition attack with a US-manufactured bomb, which turned a civilian home into rubble and killed or injured six members of the same family, is the latest in a long string of potential war crimes Amnesty International has documented over the past three years of Yemen’s devastating conflict. Since the coalition’s campaign of airstrikes against the Huthi armed group began on 25 March 2015, Amnesty International has documented how all parties to the conflict have repeatedly violated international law.

“Three years on, Yemen’s conflict shows no real signs of abating, and all sides continue to inflict horrific suffering on the civilian population. Schools and hospitals lie in ruins, thousands have lost their lives and millions are displaced and in dire need of humanitarian aid. There is extensive evidence that irresponsible arms flows to the Saudi Arabia-led coalition have resulted in enormous harm to Yemeni civilians. But this has not deterred the USA, the UK and other states, including France, Spain and Italy, from continuing transfers of billions of dollars’ worth of such arms. As well as devastating civilian lives, this makes a mockery of the global Arms Trade Treaty,” said Colm O’Gorman, Executive Director of Amnesty International Ireland.

On 27 January 2018, between 6 a.m. and 8 a.m., a Saudi Arabia-led coalition airstrike hit a civilian home in al Rakab, in southern Yemen’s Ta’iz governorate. All six members of the Naji family living there suffered casualties – the mother, Roweyda, and two sons, aged 10 and six, were killed. The father, Riyad, and his three-year-old son sustained shrapnel injuries in the stomach, while his one-year-old daughter suffered minor injuries. Amin Mohamad Naji, a relative, arrived at the scene within 10 minutes of the strike. He told Amnesty International: “I helped rescue the injured and [dead] from under the rubble. When I got there, I saw the house destroyed… [two of] the children were under the rubble, they had died, my brother’s wife too was killed. My brother Riyad and two of his children were severely injured.”

According to witnesses, the site was at least 3km from any military object and no fighters were present at the time. Amnesty International analysed a video from aftermath of the airstrike and confirmed that the munition used was a GBU-12 laser-guided 500-pound bomb manufactured in the USA by Lockheed Martin. In August 2017, an overnight attack by the Saudi Arabia-led coalition on a residential neighbourhood in southern Sana’a killed 16 civilians and injured 17 others; the majority of the dead and injured were children. In that incident, too, Amnesty International concluded that a US bomb manufactured by Raytheon had been used against a civilian home.

These are far from isolated occurrences. Since the start of the conflict, Amnesty International has documented 36 coalition airstrikes that appear to have violated international humanitarian law, many of which may amount to war crimes. These have resulted in 513 civilian deaths (including at least 157 children) and 379 civilian injuries.

The Huthi armed group and anti-Huthi forces have killed or injured civilians when they indiscriminately fired explosive munitions with wide-area effects into residential areas. The city of Ta’iz in particular experienced intensive attacks with mortars and artillery shells as recently as January and February 2018. In Sana’a and other areas they control, the Huthis and their allies have continued a wave of arbitrary arrests and detentions of their perceived opponents. Scores of men and women have been subjected to enforced disappearances, with some receiving harsh sentences after grossly unfair trials.

Since the start of 2018, Amnesty International has documented two cases in which a total of four people were sentenced to death by the Huthi-controlled Specialised Criminal Court in Sana’a. These include Hamid Haydara, who belongs to Yemen’s Bahá’í community, as well as Asmaa al-Omeissy, Saeed al-Ruwaished, and Ahmed Bawazeer, who were accused of aiding an enemy state. The defendants faced grossly unfair trials; they were subjected to enforced disappearance, lengthy pre-trial detention, torture and other ill-treatment, and had no access to lawyers. Because the Huthis carried out these violations in connection with the armed conflict in Yemen, they may amount to war crimes.

Yemen is now enduring one of the world’s largest humanitarian crises, with at least 22.2 million people in need of humanitarian assistance and more than one million suspected cases of cholera. This crisis is man-made, with the war deepening and exacerbating the humanitarian situation, and all sides impeding the delivery of humanitarian aid. After Huthi forces launched a missile unlawfully targeting civilian areas in the Saudi Arabian capital Riyadh in late November, the Saudi Arabia-led coalition unlawfully tightened its sea and air blockade on Yemen. Despite the blockade being loosened since then, the coalition continues to impose restrictions on aid and commercial imports of essential goods, including food, medicine and fuel. The coalition claims the restrictions enforce a UN arms embargo on the Huthis, but they are deepening the humanitarian crisis and contributing to violations of the right to health and to an adequate standard of living.

Medical workers have told Amnesty International how the lack of basic supplies or the danger posed by nearby fighting has forced many medical facilities to close or suspend operations.

“Thousands of Yemeni civilians have had their lives cut short and millions more lives hang in the balance amid one of the world’s worst humanitarian crises in decades. The long list of violations underscores the need for strong action from the international community. The UN Security Council’s third Presidential Statement on Yemen last week was a positive step, but we will be watching closely to ensure it gets implemented on the ground,” said Colm O’Gorman.

As of February 2018, the UN Office of the High Commissioner for Human Rights (OHCHR) reported that more than 5,974 civilians had been killed and more than 9,493 civilians wounded in Yemen since March 2015. According to the UN Office for the Coordination of Humanitarian Affairs (OCHA), more than 20 million people, or 80% of the population, are in need of humanitarian aid. In a recent report, the UN Refugee Agency (UNHCR) stated that there are more than 2 million internally displaced persons in Yemen.

In a positive development, the UN Human Rights Council passed a resolution in September 2017 mandating a group of experts to investigate abuses and violations by all parties in Yemen and identify those responsible for these, where possible. On 15 March 2018, the UN Security Council adopted a Presidential Statement (PRST) on the humanitarian situation in Yemen. The PRST represents a step forward to holding all parties to the conflict in Yemen accountable for their abuses. It calls, among other things, for full humanitarian and commercial access as well as for all parties to comply with their obligations under international humanitarian law. However, no reporting mechanism on the implementation of the PRST has been established.