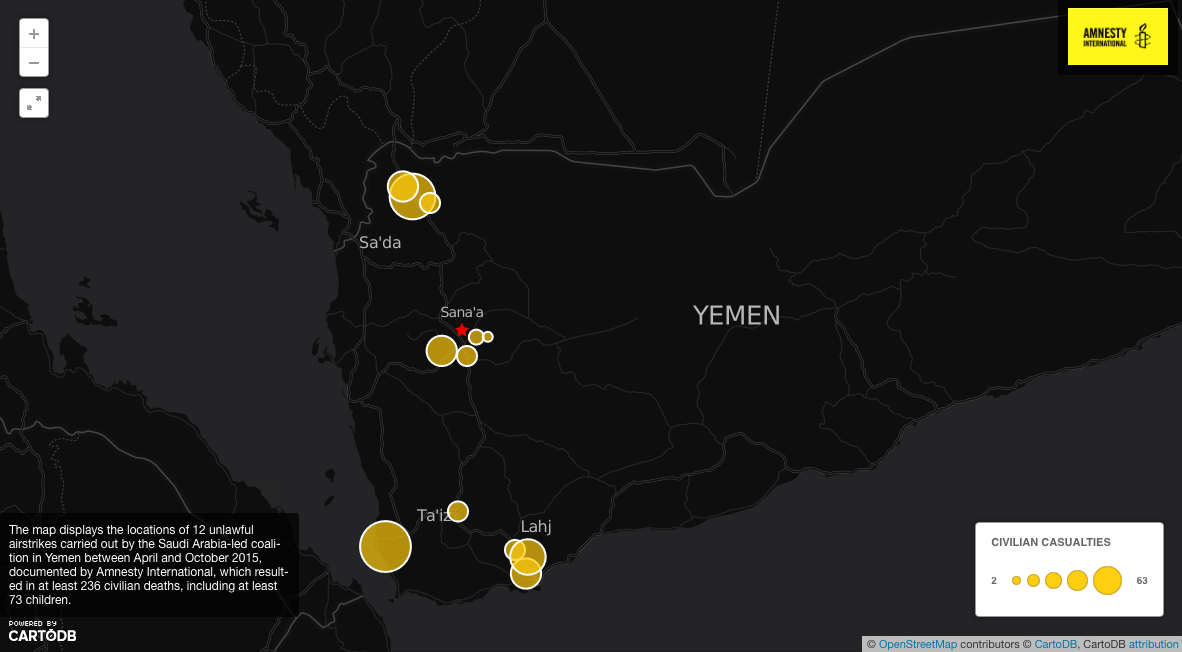 States – including the USA and the UK – must halt all transfers of arms for use in the Yemen conflict in order to stop the fuelling of serious violations that have had devastating consequences for civilians, said Amnesty International today, almost a year since the conflict began.

More than 3,000 civilians including 700 children have been killed and at least 2.5 million people have been displaced from their homes over the past year. At least 83% of the country’s population are also in dire need of humanitarian aid.

“One year on, the international community’s response to the conflict in Yemen has been deeply cynical and utterly shameful,” said James Lynch, Deputy Middle East and North Africa Director at Amnesty International.

One year on, the international community’s response to the conflict in Yemen has been deeply cynical and utterly shameful

Saudi Arabia first launched air strikes against the Huthi armed group on 25 March 2015, sparking a full-blown armed conflict in which all parties have committed extensive violations of international human rights and humanitarian law – including possible war crimes. A spokesperson for the military coalition led by Saudi Araba said last week that major combat operations were coming to an end soon, but also said the coalition would continue to provide air support to anti-Huthi forces.

Throughout the past year the USA and UK – by far the largest arms suppliers to Saudi Arabia, which is leading the coalition – and other states, have continued to allow transfers of the type of arms that have been used to commit and facilitate serious abuses, generating a humanitarian crisis on an unprecedented scale.

“Saudi Arabia’s international partners have added fuel to the fire, flooding the region with arms despite the mounting evidence that such weaponry has facilitated appalling crimes and the clear risk that new supplies could be used for serious violations. Not only that, they have failed to establish an independent, international investigation into abuses that have devastated thousands of civilian lives,” said James Lynch.

“The irresponsible and unlawful flow of arms to the warring parties in Yemen has directly contributed to civilian suffering on a mass scale. It’s time for world leaders to stop putting their economic interests first, and for the UN Security Council to impose a full, comprehensive embargo on transfers of arms for use in Yemen.”

On 25 February the European Parliament called for an EU-wide arms embargo against Saudi Arabia, which is leading the coalition forces, and on 15 March the Dutch parliament also called on the government to stop arms transfers to Saudi Arabia. In the absence of a Security Council embargo, Amnesty International is calling on all states to ensure that no party to the conflict in Yemen is supplied – either directly or indirectly – with weapons, munitions, military equipment or technology that would be used in the conflict. This also applies to logistical and financial support for such transfers.

Any authorization of arms transfers to any party to the Yemen conflict must include a strict, legally binding guarantee that they will be used in line with international humanitarian and human rights law, and that these arms will not be used in Yemen.

Violations by both sides

“Over the past year a pattern of relentless Saudi Arabia-led coalition airstrikes as well as ground attacks by either Huthi forces and their allies, or anti-Huthi forces, have displayed a shocking disregard for civilian life and flagrantly violated international humanitarian law. The devastating consequences of such attacks reveal just how vital it is to stop the flow of the arms being used to commit them,” said James Lynch.

Since the conflict began, Amnesty International has documented at least 32 air strikes across the country by the Saudi Arabia-led coalition that appear to have violated international humanitarian law. The strikes killed almost 361 civilians including at least 127 children. They also included attacks on hospitals, schools, markets and mosques, which may constitute war crimes.

On 15 March at least 44 civilians were killed and dozens more wounded in a deadly coalition airstrike on a busy market in Hajjah governorate in northern Yemen, which is controlled by Huthi forces. Residents told Amnesty International the Khamees market was a bustling civilian community hub that sold meat, fish and ice to locals.

Hasan Mohamed Masafi a father of five, lost three family members in the airstrike – his 18-year-old son and two cousins, including a 12-year-old boy. He told Amnesty International: “[My son] went to the market daily. We weren’t able to locate his whole body, we were just able to find his right leg after the airstrike.”

There have been contested reports of a military presence in the market at the time of the airstrike. According to local residents and medics that Amnesty International spoke to, there were no Huthi forces in the market, which was struck twice, minutes apart. However, some media reports quoted a tribal leader who said Huthi fighters were present at the time of the strike, some of whom were killed in the attack.

Even if this were accurate, the presence of fighters in the area would not relieve the Saudi Arabia-led coalition from its obligation to take necessary precautions to spare civilians. Under international humanitarian law, all parties to a conflict must seek to minimize risks to civilians including by cancelling or postponing an attack if it becomes evident that civilians could be disproportionately harmed.

The disputed nature of the attack in Hajjah is a good example of why a credible, independent, international inquiry is required to establish the facts about alleged violations by all parties.

Abdelhaseeb al-Mutawakil described the terrifying moment coalition forces targeted his house in Mu’een, a district in the west of Sana’a, with two consecutive airstrikes in January 2016. His wife and two young daughters were in the house at the time and only narrowly escaped the blast.

“We woke up with windows on top of everyone…I hid the girls under the stairs… two hits blew the house into pieces …there was no way to escape,” he said.

This strike, which apparently targeted a civilian home in the absence of any nearby military target, is one of scores of similar aerial attacks recorded over the past year that have flouted international humanitarian law.

Coalition forces have also repeatedly used cluster munitions, inherently indiscriminate weapons whose use is prohibited, in attacks that have killed and maimed civilians – including in the capital Sana’a.

Amnesty International has also investigated at least 30 indiscriminate or reckless ground attacks by Huthi/Saleh-loyalist forces in the southern cities of Aden and Ta’iz which killed at least 68 civilians, including dozens of children. Huthi forces and their allies have used imprecise weapons such as mortars on a daily basis in residential areas in violation of international humanitarian law.

Huthi forces have also carried out arbitrary arrests, detentions and abductions of perceived opponents including activists and journalists, and led a widespread crackdown on NGOs and human rights activists in areas under their control.

The conflict has also spurred a humanitarian disaster with the vast majority of Yemeni civilians dependent on aid as they suffer severe shortages of food, clean water and medical supplies. This has been exacerbated in Huthi-controlled areas by a partial aerial and naval blockade that has severely curtailed the import and provision of fuel and other essential supplies. In Ta’iz, the Huthi armed group and allied forces blocked the entry of crucial medical supplies and food for many months.  During that period many residents were effectively trapped in Ta’iz and deprived of basic necessities amounting to collective punishment of the civilian population.

“The obstruction of aid is aggravating the cycle of profound civilian suffering across much of the country. All parties to the conflict must ensure that the civilian population in areas under their control has access to humanitarian aid,” said James Lynch.