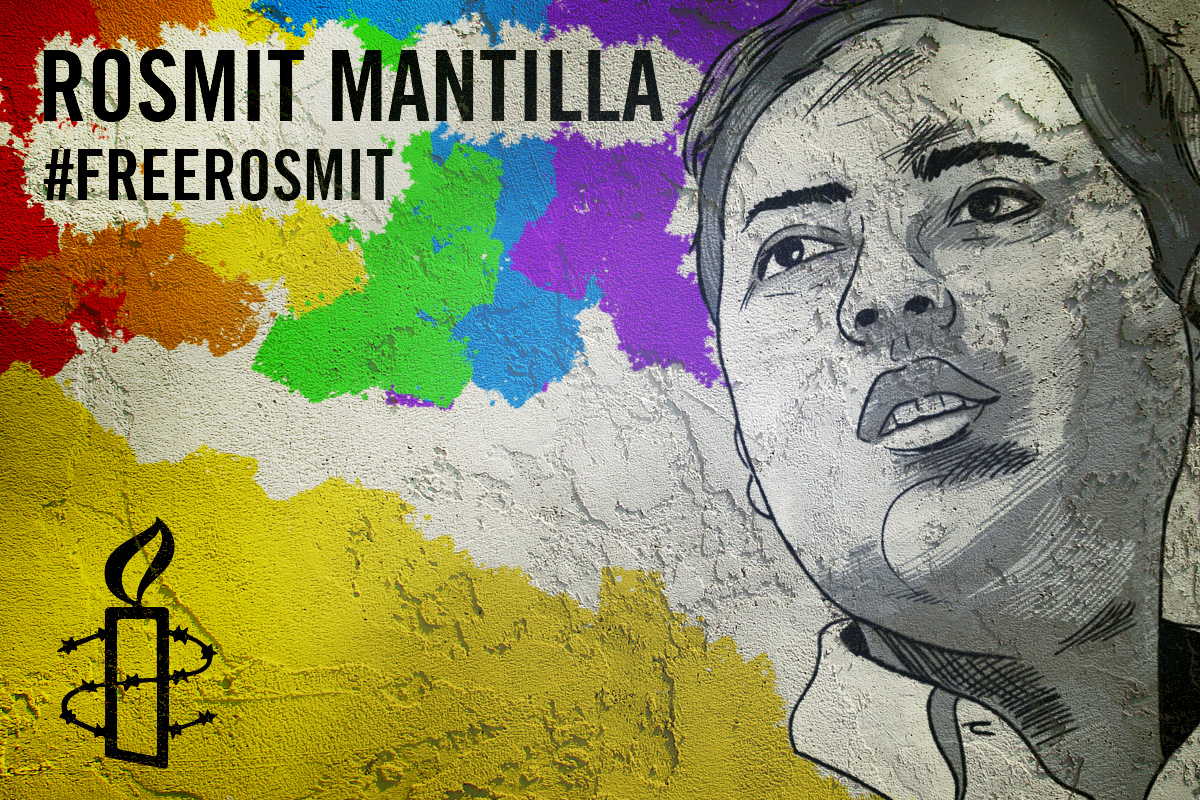 Venezuela: Ordeal faced by family of prisoner of conscience after years awaiting trial

Rosmit Mantilla Flores was waiting for the arepa (traditional corn cake) his grandmother prepared him every day for breakfast when his grandfather opened the door to around 20 Bolivarian National Intelligence Service (SEBIN) officers, heavily armed with a search warrant in hand.

The basis of the warrant was an accusation from an anonymous “cooperating patriot,” indicating that Rosmit had received money from a group of businessmen to finance anti-government protests between February and June of that year.

Rosmit, at the time a student of Social Communication, lived with his grandfather Abraham, his grandmother Luisa and his poodle puppy, Nicoll, in an apartment in Caricuao, a working-class area of Caracas.

His activism and support for lesbian, gay, bisexual, transgender and intersex (LGBTI) rights in Venezuela and his interest in politics led him to work within the opposition party Voluntad Popular.

Rosmit has been an outspoken public advocate for provisions in laws to allow civil unions for same-sex people once and for all, for the criminalization of hate crimes based on sexual orientation and gender identity or expression, and for the right to legal change of gender identity.

In Venezuela there is deep-rooted discrimination against the LGBTI community and despite the constant reports of cases of violence against this community, those responsible are seldom brought to justice.

The officers entered his room and claimed to have found envelopes containing money.

His grandfather says that Rosmit made the mistake of staying outside the room while the officials conducted the search, allowing them to plant the money there in order to fabricate this evidence.

Rosmit’s grandmother recalls: “Before they even opened the envelopes they said that they contained money.”

The envelopes were then marked with the names “Santa Fe” and “Altamira”, the two areas of the capital where groups of protestors, used to build barricades known as “guarimbas”.

SEBIN officials subsequently claimed to have found leaflets urging people to join the protests during the search of Rosmit Mantilla’s home. This was denied by Rosmit and his family. After finishing the search the officers immediately took Rosmit into custody and to date he remains behind bars awaiting a trial that is yet to begin.

After 15 days of detention, Abraham was finally allowed to visit Rosmit. They were given 10 minutes together. Although there were no signs of physical abuse, Abraham says that Rosmit had been psychologically abused.

Devastated and confused by the events, Abraham burst into tears in front of one of the officers. He said that the officer told him that his tears were useless, and that his grandson was lost, because his detention was politically motivated and there was no hope of him being released.

Life has changed radically for the Flores family, and now revolves around the two weekly visits Rosmit is allowed to receive and the hearings which they have attended over 20 times, and which are deferred whenever they make an appearance. When his grandparents wanted a psychologist to visit him they had to say that he was an uncle, because SEBIN do not allow anyone other than family to visit.

On December 6, 2015, Rosmit was elected as an acting member of the National Assembly of Venezuela. He is the first openly gay person to be elected to this position. However, Rosmit has been prevented from being sworn in as a member of the Assembly and remains in custody.

In their modest apartment in Caricuao, Rosmit’s grandparents cannot help but feel nostalgic, letting the tears of sorrow stream down their faces because they cannot bring their grandson home, although they remain strong.

They have no choice but to remain strong: they need to take Rosmit all the food he needs to survive, along with medicines and basic hygiene products such as soap, toothpaste and toilet paper. They also have to take drinking water so he can drink. None of this is provided by SEBIN. Rosmit also often asks his grandparents to help other prisoners detained alongside him who do not have relatives in Caracas to look after them.

The Attorney General’s Office has accused Rosmit of public incitement, public intimidation, obstructing a public highway, arson involving public and private buildings, violent damages and criminal association, crimes for which they are seeking a sentence of 35 years in prison. Therefore Rosmit’s grandparents are afraid that if their grandson is unjustly sentenced then they will not live long enough to see him freed.

Amnesty International believes that the Attorney General’s Office has not presented evidence to link Rosmit Mantilla to the crimes of which he is accused, and that his prolonged detention is politically motivated. Venezuelan authorities often show intolerance towards those who express critical views, which means that members of opposition parties and human rights defenders face continuous attacks and smear and intimidation campaigns from senior officials. Similarly, the interference of the executive branch in the judicial system calls into question its independence. The fact that more than 60% of judges in the country hold temporary positions makes them susceptible to political pressure.

Rosmit’s family recently informed Amnesty International that he is suffering from depression and has lost a lot of weight while in detention. Due to lack of sunlight (he is allegedly only allowed outdoors once a month) he has developed skin problems. Rosmit Mantilla is a prisoner of conscience who should be released immediately and unconditionally. He has never used or advocated violence. His grandparents and the rest of his family continue to wait for his release.