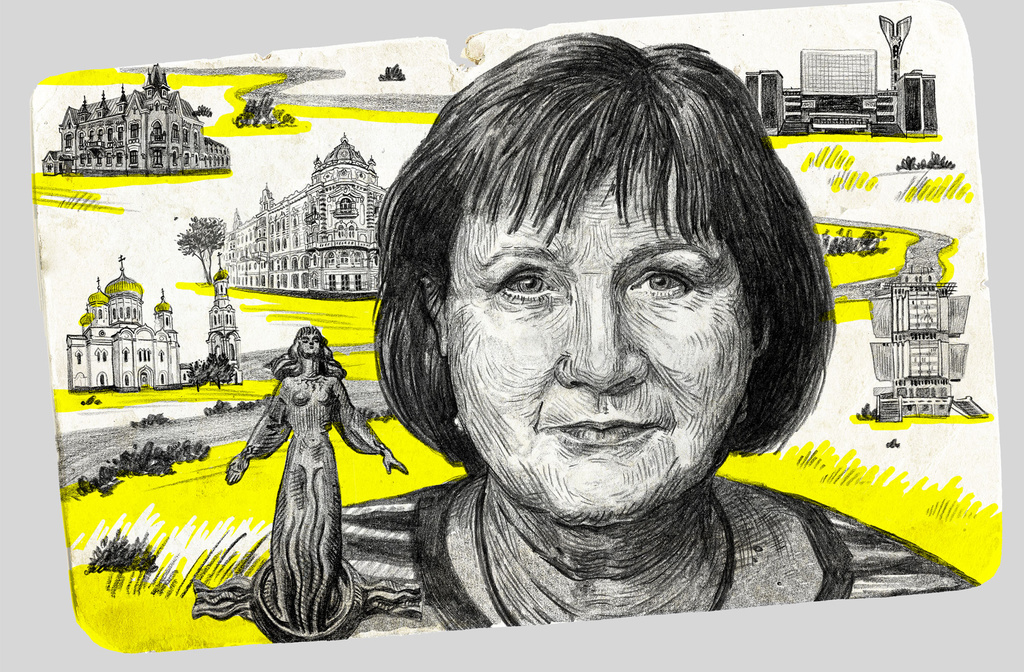 Valentina Cherevatenko is a human rights defender in the Novocherkassk, Rostov Region of Russia working with people in areas of ongoing armed conflict.

My city of Novocherkassk is my life. In my last year at school, I wanted to leave the city, but later, once I had left, I realised that the city was not letting me go. This is my home. Some places in the city are deeply symbolic. One such place is the Palace Square, where in 1962 troops opened fired on workers who were peacefully demonstrating against shortages of food and provisions. A commemorative stone has been installed in the Palace Square in memory of the event and a permanent exhibition in the nearby Ataman’s Palace Museum tells the story of the repression.  Although the events of 1962 affected virtually every family in the city, it was only 10 to 15 years ago that it became the subject of an open conversation. Even my own mother told me, only five years ago, that she had also gone to the Square with a group of negotiators and that it was by pure chance that she had not suffered any harm. In a way, I was also part of the events, and this was what inspired me to become a human rights defender.

Women of the Don started as a social organisation to support people who were experiencing hardship during the break-down of the USSR in the early 1990s. This was a time of total collapse, when it was very difficult for marginalized people to survive. We saw large families, single mothers, grandmothers raising their orphaned grandchildren, all going through hard times and we helped them. At the time, we did not see this as human rights work. From the very start, we decided that our organisation would help everyone. We could be reached by phone at any time. Former prisoners whose rights were violated by law enforcement agencies could also turn to us for help. Our long-term projects include cases involving the defence of human rights, conflict resolution, and supporting people in areas of ongoing armed conflict.

The armed conflict in Chechnya in the 1990s deeply affected me. I realised that this should not be happening and that’s when we started our rehabilitation programmes. We also focused on supporting women and defending their rights; during the Chechen wars and their aftermath, the problem of violence against women was occurring on a massive scale. Last autumn, we received a new wave of complaints from women who were facing gender-based violence. Though I cannot categorically state that this increase is related to the decision of the Russian Parliament to decriminalise domestic violence, it remains a fact that the number of complaints has increased since then.

Not so long ago, we were contacted by a woman whose husband works in a higher education institution. He beat her so badly that she needed an operation as a result of damage to her internal organs. She left him. Our psychologists spent a long time working with her. But after some time she went back to her husband, and came in again after he had beaten up their son with a buckle belt so badly that it left scars on him. She went to the police but they refused to start criminal proceedings against her husband. When we talked to her, we learnt how deeply the abuse ran to her and her children, for example, in order to potty train their youngest child, her husband tied him to the potty with sticky tape.

In my view, the rise of aggressive behavior in our society is affecting families even more than the decriminalisation of domestic violence. The situation with Ukraine has catastrophically split our society, into those that proclaim “Crimea is ours!”, and those that are quietly saying “no”. Their quiet protest provokes outbursts of aggression in the other half. But we need to find words to stop this escalation, whilst at the same time revealing the other side of the coin. This is incredibly difficult and requires tremendous effort, especially in the region where I live. Here in Rostov, we now have a monument to the defenders of Donbass (the pro-Russian volunteers who fought in Eastern Ukraine – Amnesty). In such circumstances, you will always be an enemy. We have already experienced this.

A year and a half ago, members of the President’s Council for Human Rights came into our office. They wanted to understand what was happening here, and to hold a regular off-site meeting to discuss issues that local civil society organisations were facing. Everyone was aware of their visit: from the government of Rostov Region, to the local administration in Novocherkassk. When members of the President’s Council for Human Rights arrived, a group of protestors appeared outside our office, members of the so-called National Liberation Movement. Then the Cossacks arrived, standing a few metres away from our office, waving flags, shouting, and trying to get attention of the passers-by. A reporter from a Slavic News publication referred to me as an enemy of the people when covering the protest. A video recording of this report was made and published on the internet.

But many people have always supported us. For example, when our office windows were smashed and the walls were covered in graffiti, a businessman stopped by and came in to ask what had happened. We told him the story and, half an hour later, the broken glass was replaced and I was able to get back to work in my office. Elderly people also come by and put money in our small donations box. There is always small change in it, and sometimes 100 or 500 rouble ($1.7-8) notes. Receiving such help allows us to survive in these difficult times when civil society organizations find it so hard to find funding for their work.

In June and July, Russia is hosting the Football World Cup. I feel very positive about this and about the fact that some of the matches will be played in the Rostov Region. I can see that opportunities for international dialogue are dwindling. This Championship gives us hope that the window of opportunity will not be shut down. This means very much to me. I would like to say to our guests: “Please support those who are going through difficult times today, even if it is not where you live”. Today we must support Oyub Titiev, a human rights defender detained solely for his peaceful activism. I would like the fans to remember this and understand that his freedom means a great deal to all of us, anywhere in the world. I would like to see people joining our call for his immediate release.