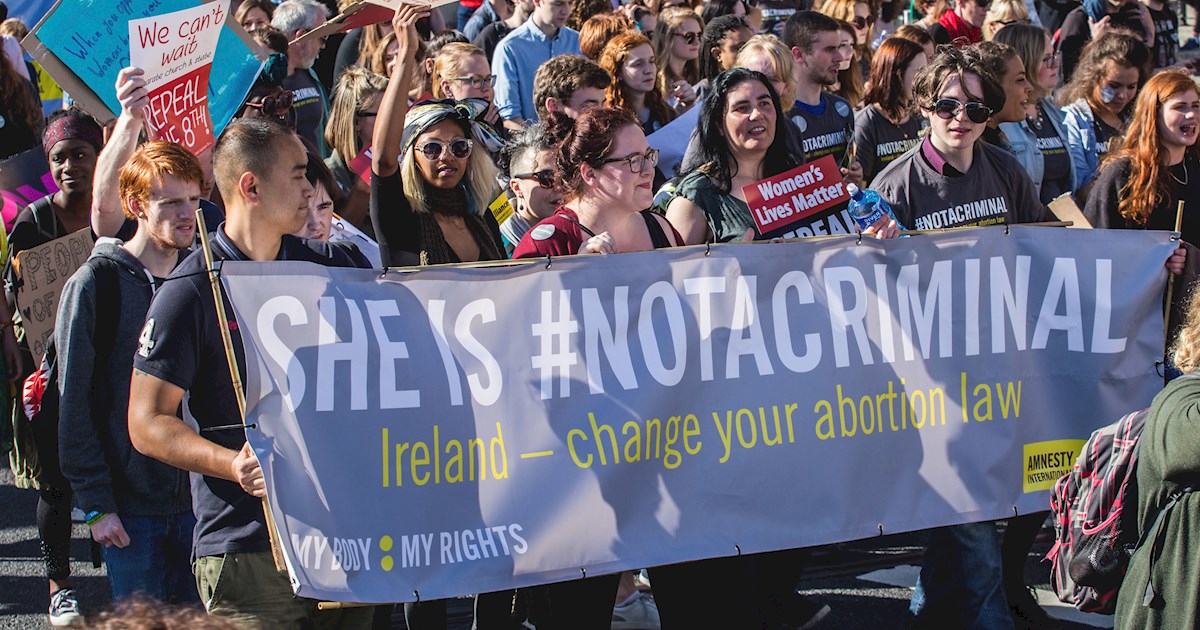 Ireland’s prohibition and criminalisation of abortion services violated the human rights of a woman living in Ireland and caused her “intense physical and mental suffering” according to a ground-breaking ruling from the United Nations Human Rights Committee — a first for any international human rights court or committee.

The U.N. committee found that Ireland’s laws subjected Amanda Mellet to severe emotional and mental pain and suffering by denying her access to abortion services in Ireland. Ms Mellet was denied an abortion in Ireland in 2011 after learning that her pregnancy had a fatal foetal impairment. She subsequently travelled to the United Kingdom to undergo the procedure. The committee instructs the Irish government to act promptly and effectively to redress the harm Ms. Mellet suffered and reform its laws to ensure other women do not face similar human rights violations and to guarantee effective, timely and accessible procedures for abortion in Ireland.

The U.N. authority found that Ireland’s abortion laws violated Ms Mellet’s right to freedom from cruel, inhuman or degrading treatment. The ruling also found that Ireland’s failure to provide services that Ms. Mellet required constituted discrimination. The Committee found that Ireland’s criminalisation of abortion caused Ms Mellet shame and stigma and that her suffering was further aggravated by the obstacles she faced in getting information about the appropriate medical options.

This ruling is the first time that, in response to an individual complaint, an international human rights court or committee has found that the prohibition and criminalisation of abortion in itself results in human rights violations.

The Committee called on Ireland to “amend its law on voluntary termination of pregnancy, including if necessary its Constitution, to ensure compliance with the Covenant, including effective, timely and accessible procedures for pregnancy termination in Ireland, and take measures to ensure that health-care providers are in a position to supply full information on safe abortion services without fearing being subjected to criminal sanctions”

Said Leah Hoctor, regional director for Europe at the Center for Reproductive Rights:

“When a woman is denied the right to make decisions about her pregnancy, her health and wellbeing are jeopardised. In recognising that by outlawing abortion Ireland violated the human rights of Amanda Mellet and caused her intense anguish and distress, the Committee has issued a landmark ruling confirming that Ireland’s abortion laws are cruel and inhumane, and violate women’s human rights. The Irish government must now comply with this ruling, redress the harm Ms. Mellet suffered and reform its laws to ensure other women do not continue to face similar violations.”

When a woman is denied the right to make decisions about her pregnancy, her health and wellbeing are jeopardised.

Said Leah Hoctor, regional director for Europe at the Center for Reproductive Rights:

The Center for Reproductive Rights (the Center) filed the complaint to the U.N. committee in November 2013 on Ms. Mellet’s behalf. Today, the Center together with Amnesty International Ireland, the Coalition to Repeal the Eighth Amendment, the Irish Family Planning Association, the National Women’s Council of Ireland, and Termination for Medical Reasons called on the Irish government to comply with the ruling without delay.

“Today’s finding is further proof, if any were needed, that Ireland’s abortion laws violate the human rights of women and girls and cause intense suffering. The Irish government must act promptly. Ireland’s Constitution is no excuse – it must be changed to allow the reforms required by this ruling. The government must not continue to turn its back on women in Ireland, and on the Irish people who overwhelmingly support the UN Committee’s directive for change.”

“The denial of abortion services in Ireland seriously harms women’s health. The UN’s ruling recognises this and echoes what the IFPA hears every day: obliging women and girls to leave the state and travel abroad for abortion services is cruel, inhuman and degrading. Women in Ireland have the right to the highest standard of reproductive healthcare, including abortion services, and Ireland’s laws must be reformed to guarantee this right.”

Said Ailbhe Smyth, convenor of the Coalition to Repeal the Eighth Amendment:

“Simply put, the Eighth Amendment violates women’s human rights. It is time for Irish politicians to offer some genuine political leadership and give a firm commitment to a time frame in which a referendum to repeal the eighth amendment will be held.”

“This ruling vindicates the rights of women in Ireland, which have been gravely undermined by Ireland’s restrictive abortion regime at great cost to their health and well-being. Women must be trusted to make the best choices in their pregnancies and we must respect their decisions, including the decision to end a pregnancy.”

“We are very proud of Amanda who has shown incredible bravery and selflessness in going public and taking her case to the UN Human Rights Committee to hold Ireland accountable for its punitive laws and ensure that women are no longer denied the ability to end their pregnancies in Ireland.”

Ireland’s abortion laws are among the most restrictive in the world. Abortion is permitted only when there is a risk to the life of a pregnant woman. In every other circumstance abortion is a serious crime. Since 1983, Article 40.3.3 of the Irish Constitution has placed “the right to life of the unborn” on an equal footing with the right to life of pregnant women. Because of Ireland’s restrictive abortion laws, every year approximately 4,000 pregnant women travel to access abortion services in a foreign country.

The U.N. Human Rights Committee is an independent expert body that oversees states’ compliance with the International Covenant on Civil and Political Rights. It is charged with a dual mandate in that regard. First, to conduct periodic reviews of state reports on implementation of the Covenant and to issue ‘concluding observations’ on those reports. Second, under the First Optional Protocol to the Covenant, it is mandated to receive individual complaints from alleged victims of violations, to adjudicate the matter and issue its views as to whether a violation occurred. Amanda Mellet’s complaint was submitted in accordance with the procedure under the First Optional Protocol.