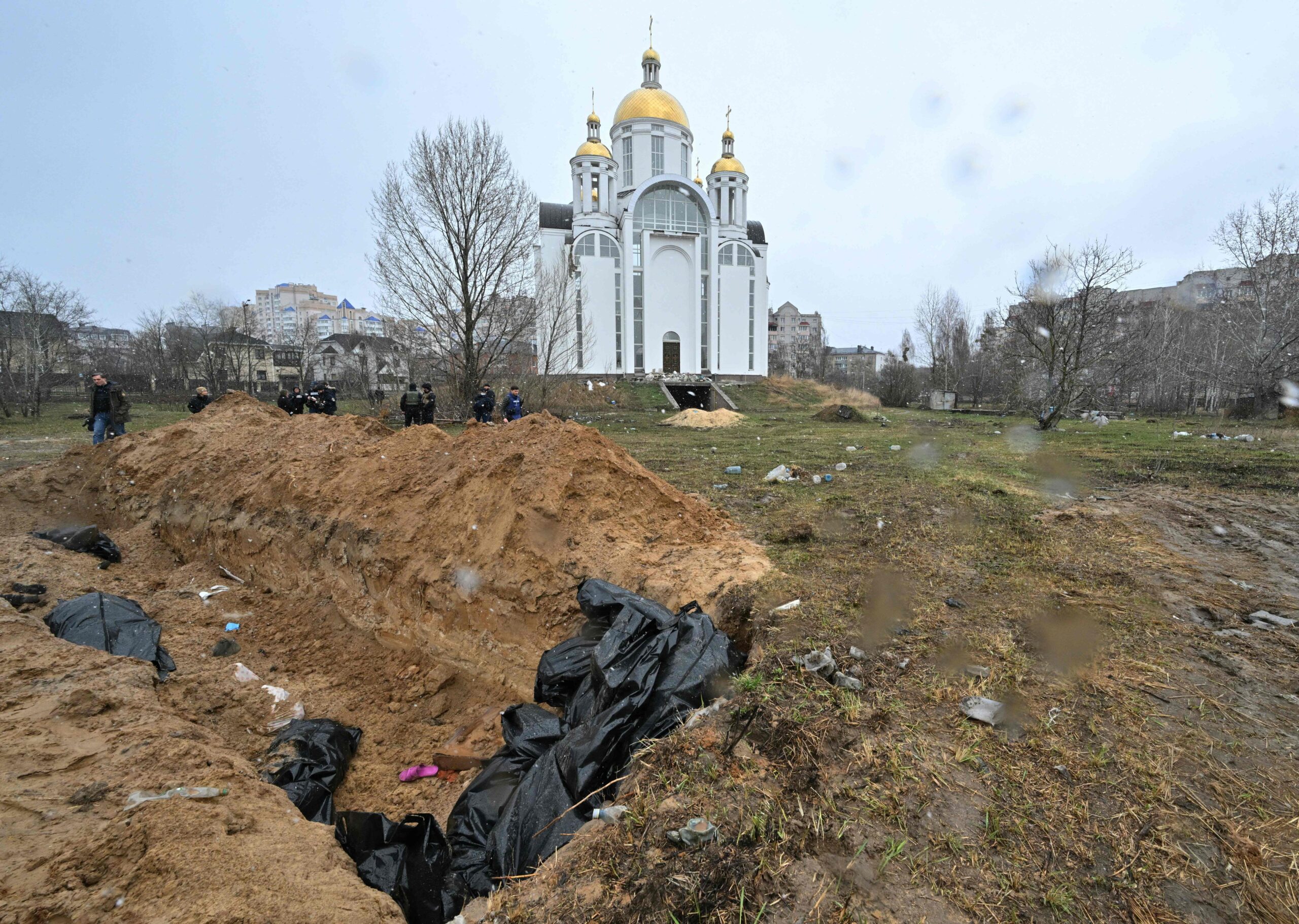 Amnesty International’s Crisis Response investigators interviewed more than 20 people from villages and towns close to Kyiv, several of whom had witnessed or had direct knowledge of horrifying violence committed by Russian forces.

They repeatedly told of deliberate killings, unlawful violence, and widespread intimidation by Russian forces against unarmed civilians across the Kyiv region.

“In recent weeks, we have gathered evidence that Russian forces have committed extrajudicial executions and other unlawful killings, which must be investigated as likely war crimes,” said Agnès Callamard, Secretary General of Amnesty International.

“Testimonies shows that unarmed civilians in Ukraine are being killed in their homes and streets in acts of unspeakable cruelty and shocking brutality.

“The intentional killing of civilians is a human rights violation and a war crime. These deaths must be thoroughly investigated, and those responsible must be prosecuted, including up the chain of command.”

To date, Amnesty International has obtained evidence that civilians were killed in  indiscriminate attacks in Kharkiv and Sumy Oblast, documented an airstrike that killed civilians queueing for food in Chernihiv, and gathered evidence from civilians living under siege in Kharkiv, Izium and Mariupol.

‘They shot him in the head’

One 46-year-old woman, from the village of Bohdanivka, said Russian forces entered her village on 7 or 8 March, and parked their tanks on the streets.

In the evening of 9 March, the woman – who lived with her husband, 10-year-old daughter and mother-in-law – heard shooting through their downstairs windows. She and her husband shouted that they were civilians, and that they were unarmed. When they came downstairs, two Russian soldiers pushed them and their daughter into a boiler room.

She told Amnesty International: “They forced us in and slammed the door. After just a minute they opened the door, they asked my husband if he had cigarettes. He said no, he hadn’t smoked for a couple of weeks. They shot him in his right arm. The other said, ‘Finish him,’ and they shot him in the head.

“He didn’t die right away. From 9.30pm to 4am he was still breathing, though he wasn’t conscious. I begged him… ’If you can hear me, please move your finger’. He didn’t move his finger, but I put his hand on my knee and squeezed it. Blood was flowing out of him. When he took his last breath, I turned to my daughter and said, ‘It seems daddy has died’.”

A neighbour witnessed Russian forces breaking into the woman’s house that night, and confirmed he had seen her husband’s body slumped in the corner of the boiler room. The woman and her child escaped from Bohdanivka later that day. The woman’s mother-in-law, aged 81, has limited mobility and was left behind.

‘My father had six large holes in his back’

On 3 March, Kateryna Tkachova, 18, was at home in the village of Vorzel with her parents when several tanks displaying the letter ‘Z’ – which Russian forces have used to mark their vehicles during the invasion of Ukraine – were driven down their street.

Her mother Nataliya and father Valeryi left the cellar where they were hiding to go into the street, after telling Katerina to stay where she was. Kateryna then heard gunshots.

She told Amnesty International: “Once the tanks had passed by, I jumped over the fence to the neighbour’s house. I wanted to check if they’re alive. I looked over the fence and saw my mother lying on her back on one side of the road, and my father was face down on the other side of the street. I saw large holes in his coat. The next day I went to them. My father had six large holes in his back, my mother had a smaller hole in her chest.”

Kateryna said that her parents were dressed in civilian clothing and unarmed. On 10 March, a volunteer involved in evacuations from areas around Kyiv helped Kateryna leave Vorzel. The volunteer told Amnesty International he had seen the bodies of Kateryna’s parents lying in the street near her house. In a video verified by Amnesty International, the pair can be seen writing Kateryna’s parents’ names, dates of birth, and dates of death on a piece of cardboard, before placing it beside their bodies, which are covered with blankets.

‘They noticed us and immediately opened fire’

During the first days of Russian occupation of the city of Hostomel, Taras Kuzmak was driving around delivering food and medication to bomb shelters where civilians were gathering.

At 1.30pm on 3 March, he was with the city’s mayor, Yuryi Prylypko, and two other men, when their car came under gunfire from the direction of a large residential complex that had been seized by Russian forces. The men tried to jump out of the car, but one man, Ivan Zorya, was killed immediately, while Yuryi Prylypko fell to the ground injured after being shot. Taras Kuzmak and the other surviving man hid behind an excavator for hours as shooting continued.

He told Amnesty International: “They noticed us and immediately opened fire, there was no warning. I could only hear the mayor [Prylypko]. I knew he was injured, but I didn’t know if it was fatal or not. I just told him to lie still, not to make any moves… They shot at us again at around 3pm, and about half-an-hour after that, I understood there was no life from him. There is a kind of breathing somebody has only right before they die, their last breath. Ivan Zorya’s head was taken off, I think they must have been using something high-calibre.”

Two other Hostomel residents told Amnesty International they had seen Yuryi Prylypko’s body near a church when an impromptu funeral was held for him several days later. Other residents confirmed that in the days leading up to his death, Yuryi Prylypko had been delivering food and medication around the city, always driving a civilian vehicle.

Amnesty International collected three additional accounts of unlawful killings of civilians, including the account of a survivor of rape whose husband was extrajudicially executed, by Russian forces.

A woman in a village east of Kyiv told Amnesty International that, on 9 March, two Russian soldiers had entered her house, killed her husband, then repeatedly raped her at gunpoint while her young son hid in a boiler room nearby. The woman was able to escape from the village to Ukrainian-controlled territory with her son.

Milena, a 24-year-old from Bucha, told Amnesty International that she saw the body of a woman who had lived on her street lying outside her house. The woman’s mother told Milena that her daughter was shot in the initial days of the invasion while looking over her fence at a Russian military vehicle. Amnesty International’s Crisis Evidence Lab independently verified video footage that confirmed the location of the shallow grave in which she was buried.

Volodymyr Zakhliupanyy and his wife fled the city of Hostomel in the first few days of the invasion, but their son Serhiy, 39, was determined to stay.

Initially, they spoke by telephone every day, and Serhiy described the heavy fighting in the city. On 4 March, Volodymyr could no longer contact his son. Friends who remained in the city then tried to find Serhiy, and went to the building where he had been sheltering in the basement.

Volodymyr told Amnesty International: “When they asked the neighbours, they said that on 13 March my son was taken away [from the basement] by the Russians. When they went looking for Serhiy, they found him behind the garages of the same building… they said he had been shot in the head.”

Interviewees told Amnesty International they had lost access to electricity, water, and gas in the early days of the invasion, and there was very limited access to food. There was little mobile phone connectivity, and some interviewees said Russian soldiers had confiscated or destroyed mobile phones whenever they saw residents carrying them, or threatened them with violence for having a phone.

Threats of violence and intimidation were also widespread. One man in Hostomel said that he saw an entire dormitory of people who were sheltering from shelling who were forced to go outside, where Russian military officers immediately fired gunshots over their heads, forcing them to drop to the ground. Two men from Bucha also said snipers regularly shot at them when they went to salvage food from a destroyed grocery store near their home.

“As these horrendous accounts of life under Russian occupation continue to emerge, the victims in Ukraine must know that the international community is determined to secure accountability for their suffering,” said Agnès Callamard.

War crimes and other violations of international humanitarian law

Deliberate killings of civilians, rape, torture, and inhumane treatment of prisoners of war are human rights violations and war crimes. Those who directly commit war crimes should be held criminally responsible for them. Under the doctrine of command responsibility, hierarchal superiors – including commanders and civilian leaders, such as ministers and heads of state – who knew or had reason to know about war crimes committed by their forces, but did not attempt to stop them or punish those responsible, should also be held criminally responsible.