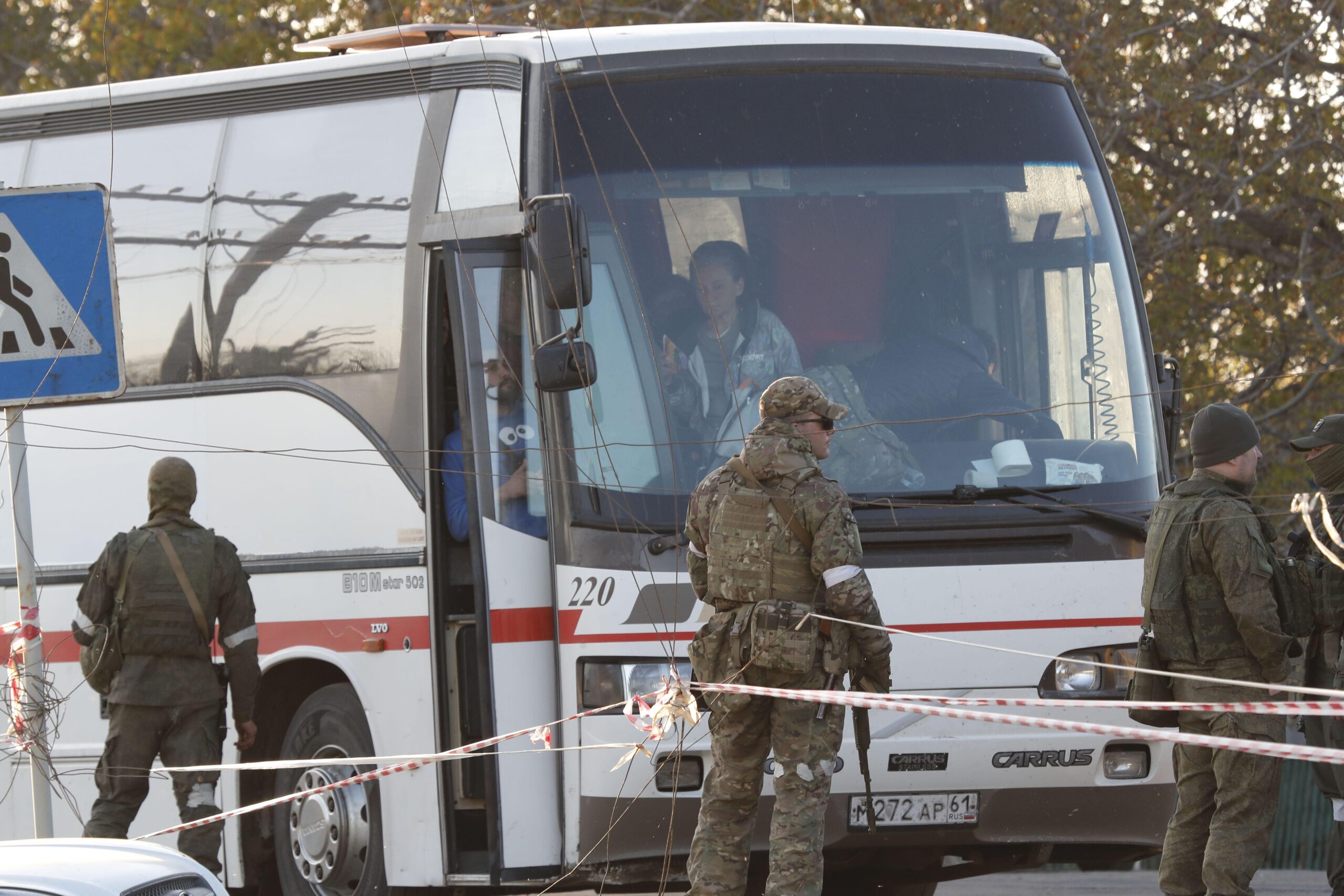 Russian authorities forcibly transferred and deported civilians from occupied areas of Ukraine in what amounted to war crimes and likely crimes against humanity, Amnesty International said in a new report published today.

The report, “Like a Prison Convoy”: Russia’s Unlawful Transfer of Civilians in Ukraine and Abuses During ‘Filtration’, details how Russian and Russian-controlled forces forcibly transferred civilians from occupied Ukraine further into Russian-controlled areas or into Russia. Children have been separated from their families during the process, in violation of international humanitarian law.

Civilians told Amnesty International how they were forced through abusive screening processes – known as ‘filtration’ – which sometimes resulted in arbitrary detention, torture, and other ill-treatment.

“Separating children from their families and forcing people hundreds of kilometres from their homes are further proof of the severe suffering Russia’s invasion has inflicted on Ukraine’s civilians,” said Agnès Callamard, Amnesty International’s Secretary General.

“Since the start of their war of aggression against Ukraine, itself an international crime, Russian forces have indiscriminately attacked and unlawfully killed civilians, destroyed countless lives, and torn families apart. No one has been spared, not even children.

“Russia’s deplorable tactic of forcible transfer and deportation is a war crime. Amnesty International believes this must be investigated as a crime against humanity.

“All those forcibly transferred and still unlawfully detained must be allowed to leave, and everyone responsible for committing these crimes must be held accountable. Children in Russian custody must be reunited with their families, and their return to Ukrainian government-controlled areas must be facilitated.”

Amnesty International documented cases in which members of specific groups – including children, older people and people with disabilities – were forcibly transferred to other Russian-occupied areas or unlawfully deported to Russia. In one case, a woman was separated from her 11-year-old son during filtration, detained, and not reunited with him, in clear violation of international humanitarian law.
People detained during filtration told Amnesty International they had been subjected to torture and other ill-treatment, including being beaten, electroshocked and threatened with execution. Others had been denied food and water, with many held in dangerous and overcrowded conditions.
Amnesty International interviewed 88 people from Ukraine. The majority were civilians from Mariupol, as well as civilians from the Kharkiv, Luhansk, Kherson and Zaporizhzhia regions. Most, especially those from Mariupol, described coercive conditions that meant that they had no meaningful choice but to go to Russia or other Russian-occupied areas.

Amnesty International considers Russia’s annexation of Ukrainian territory, including the so-called ‘Donetsk People’s Republic’ (DNR) in the Russian-controlled part of Donetsk Region, to be illegal.

In early March 2022, the southeastern city of Mariupol was completely surrounded by Russian forces, making evacuations impossible. The city was subjected to near-constant bombardment, and civilians lacked access to running water, heat or electricity.

Thousands of people were able to evacuate the city towards Ukrainian government-held areas in mid-March, but as Russia gradually occupied the city, it forcibly transferred some civilians in neighbourhoods under its control, cutting them off from other escape routes. Civilians said they felt coerced to go on ‘evacuation’ buses to the DNR.

Milena, 33, told Amnesty International her experience while trying to flee Mariupol: “We started to ask questions about evacuation, where it is possible to go… I was told [by a Russian soldier] that it was only possible to go to the DNR or to Russia. Another girl asked about other possibilities [to evacuate], for instance to Ukraine… The answer came straight away, the soldier interrupted and said, ‘If you don’t go to the DNR or the Russian Federation, you will stay here forever’.”

Milena’s husband, a former marine with the Ukrainian military, was detained soon afterwards while crossing the border into Russia, and has not yet been released.

Forcible transfer of children and other at-risk groups

The laws of armed conflict prohibit the individual or mass forcible transfer of protected persons, including civilians, from occupied territory. In several cases, children fleeing without parents or other guardians towards Ukrainian-held territory were stopped at Russian military checkpoints, and transferred into the custody of Russian-controlled authorities in Donetsk.

As mentioned, an 11-year-old boy was separated from his mother during filtration, which violates international humanitarian law. The boy and his mother were captured and detained from the Illich Steel and Iron Works in Mariupol in mid-April by Russian forces.

He told Amnesty International: “They took my mom to another tent. She was being questioned… They told me I was going to be taken away from my mom… I was shocked… They didn’t say anything about where my mom was going… I have not heard from her since.”

The report also details the forcible transfer to Donetsk of all 92 residents of a state institution for older people and people with disabilities in Mariupol. Amnesty International documented several cases in which older people from Ukraine appeared to have been placed in an institution in Russia or Russian-occupied areas after fleeing their homes. This practice violates the person’s rights, and makes it difficult for them to leave Russia or to reunite with family members in Ukraine or elsewhere.

Once in Russia, several people said that they felt pressured into applying for Russian citizenship, or said their movements were restricted. The process of obtaining Russian citizenship has been simplified for children who are alleged to be either orphans or without parental care, and for some people with disabilities. This was meant to facilitate the adoption of these children by Russian families, in violation of international law.

These actions indicate a deliberate Russian policy related to its deportation from Ukraine to Russia of civilians, including children, suggesting that in addition to the war crime of unlawful deportation and transfer, Russia has likely committed the crime against humanity of deportation or forcible transfer.

Civilians from Ukraine who fled or were transferred to Russian-occupied areas or to Russia were usually forced through an abusive screening process when entering the DNR, when crossing the border into Russia, and also when leaving Russia for a third country. This process violates their rights to privacy and physical integrity.

At filtration points, officials took photographs of people, collected their fingerprints, searched people’s phones, forced some men to strip to their waists, and interrogated people at length.

Amnesty International documented seven cases where people suffered torture and other ill-treatment during detention. One case involved a 31-year-old woman, another a 17-year-old boy, and five were men in their 20s or 30s.

Vitalii, 31, was detained when he tried to leave Mariupol on an evacuation bus on 28 April. After Russian soldiers declared there was an issue with his documentation, he was forced onto a bus with several other men. He was driven to Dokuchaevsk, a town close to Donetsk, and placed in a cell with 15 men, before being taken for interrogation.

He told Amnesty International: “They bound my hands with tape and put a bag over my head and put tape around my neck… Then they said, ‘Tell us everything… Tell us where you serve, which base?’… [When I said I wasn’t a soldier] they started beating me in the kidneys very hard… I was on my knees, they were mostly kicking me. When they took me back to the garage, they said, ‘Every day, we will do this to you’.”

Amnesty International documented other cases that amount to enforced disappearances under international human rights law, and to the war crimes of unlawful confinement, torture and inhuman treatment.

Hussein, a 20-year-old student from Azerbaijan, was detained while fleeing Mariupol for Zaporizhzhia in mid-March, and held for almost a month. He was accused of being a member of the Ukrainian military, and beaten while being interrogated.

Hussein told Amnesty International: “One of the soldiers said, ‘He won’t talk like this, bring the electric shocker’… There were two wires, they put them around my big toes and started shocking me repeatedly… They beat me repeatedly… I lost consciousness. They poured a bucket of water on me, and I woke up again. I couldn’t take it anymore, I just said, ‘Yes, I’m a soldier’. They continued beating me, I fell off the chair and they pulled me back up. There was blood coming out of my feet.”

Hussein was threatened with execution, beaten and electroshocked every day, until just a few days before his release on 12 April.

“The Office of the Prosecutor of the International Criminal Court and other relevant authorities must investigate these abhorrent crimes, including those against victims from at-risk groups. All those responsible for deportation and forcible transfer, as well as torture and other crimes under international law committed during filtration, must face justice.”

Amnesty International interviewed 88 women, men and children from Ukraine for the report. At the time of the interviews, all but one were in Ukrainian government-controlled areas or were in a safe third country in Europe. One person remained in a Russian-occupied area.

Amnesty International has repeatedly called for members of Russian forces and officials responsible for the aggression against Ukraine and for violations to be held to account, and has welcomed the ongoing International Criminal Court investigation in Ukraine. Comprehensive accountability in Ukraine will require the concerted efforts of the UN and its organs, as well as initiatives at the national level pursuant to the principle of universal jurisdiction.