Ukraine: One year after EuroMaydan protests, justice denied for victims of violence

A deeply imbedded culture of impunity, lack of expertise and in some cases, deliberate obstruction, are denying justice to the hundreds of victims of police abuses during the EuroMaydan protests in Ukraine, says Amnesty International in a new briefing on the first anniversary of the protest.

Ukraine: A Year After Maydan, Justice Delayed, Justice Denied details the consistent failure to investigate unlawful use of force by security forces in Ukraine during the EuroMaydan protests in Kyiv and the failure of the authorities to deliver justice for the victims.

“The deplorable lack of progress in delivering justice for those killed, injured and tortured exposes once again the deep failings of the Ukrainian criminal justice system,” said Colm O’Gorman, Executive Director of Amnesty International Ireland.

“The failure to address the widespread abuses during the EuroMaydan protests risks entrenching a long-standing culture of impunity for police officers. Justice needs to be delivered, not just for those killed, but also for the many more who were ill-treated.” 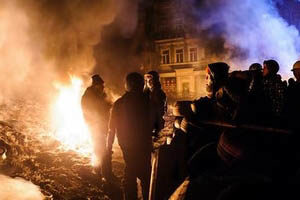 According to the Ministry of Health, 105 people died as a result of the protest, including at least 13 police officers.

Amnesty International documented numerous cases of unlawful use of force, including killings and torture during the demonstrations. It has repeatedly submitted the details of cases of arbitrary and excessive use of force to the Ukrainian authorities, but has not yet seen demonstrable progress in any of the cases it has been following.

To date, only two low-ranking officers have been convicted after being caught on camera forcing a man to stand naked in sub-zero temperatures in public. They were given suspended sentences of three and two years for “exceeding authority or official powers”. Several other police officers involved in the ill-treatment escaped indictment.

The first protestor to lose his life was 21 year-old Serhiy Nihoyan who was shot four times, including in the head and the neck, on 22 January 2014. The identity of his killer is still unknown. Many protesters were tortured or mistreated. A 23-year-old man was beaten and dragged by his lips to a police vehicle and had tear gas sprayed on his genitals, before losing consciousness.

One woman, aged 51, was hit with a baton in the face by a police officer as she watched the protests. Her skull was fractured and she lost the sight of one eye.

Almost all of the victims Amnesty International spoke to said that they had not been interviewed as victims of crimes, though many had initially been interviewed as alleged perpetrators. None have been informed of the progress of investigations many months after filing their complaints.

Following the downfall of President Yanukovych in February 2014, the new government was quick to name him and his closest associates, who also fled the country, as the principal culprits of the violations committed during the EuroMaydan protests.

The new Ukrainian authorities have made numerous promises to investigate effectively all human rights abuses and bring those responsible to justice.

“The efforts of investigators to date have focused on the killings and the alleged responsibility of senior figures in the previous government, but even on these there have been more declarations of progress than actual signs of it. For most of those who were injured and ill-treated,investigations have barely even begun,” says Colm O’Gorman.

Amnesty International has spoken to pointed to the destruction of evidence by security forces in the immediate aftermath of the protests and the reluctance of security officers to cooperate as key obstacles to investigations. A lack of resources and the overlapping competences of different investigative authorities were also cited.

“The sheer number of incidents and the complexity of some of the cases need to be acknowledged. However, the bigger truth is that without significant reform of the institutions responsible for investigating abuses by security officers, justice for the victims of EuroMaydan related abuses will remain elusive and the vicious cycle of impunity that contributed to them unbroken,” says Colm O’Gorman.