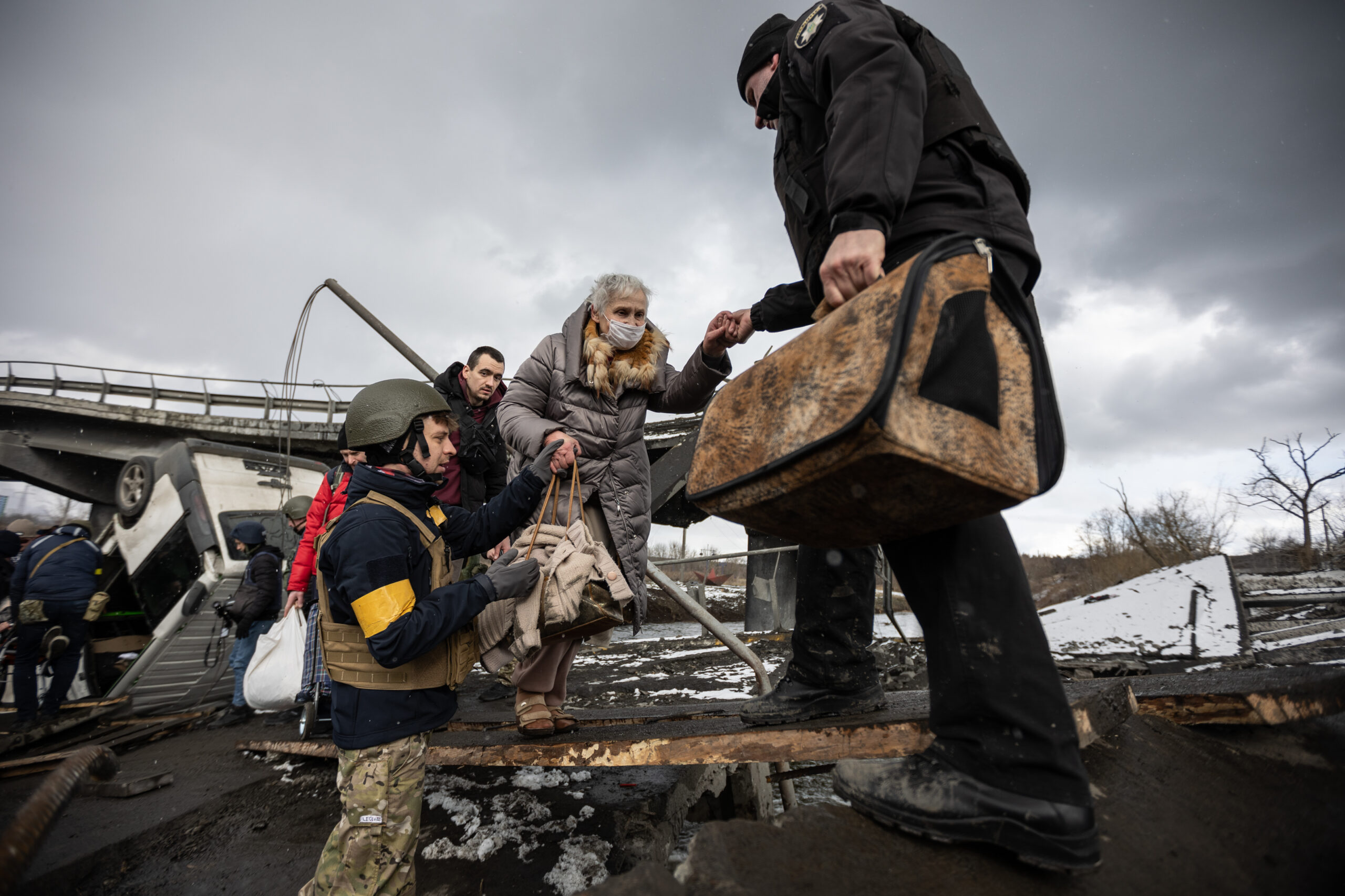 Civilians whose homes have been destroyed and others fearing for their lives forced to flee Russian bombardment must be granted access to safe humanitarian corridors, Amnesty International said today.

To date, thousands of people have been living under unlawful bombardment, while millions of people have been forcibly displaced over the course of two weeks of conflict in Ukraine. Russian forces’ assault on civilian populations and wanton destruction of the infrastructure of daily life violate the Geneva Conventions and international human rights law and must cease.

At a bare minimum, safe evacuation routes must be provided and yet, to date, many such corridors have proven both unreliable and dangerous. Ukraine and Russia first agreed on 3 March to establish humanitarian corridors for civilian evacuation and humanitarian aid delivery, but implementation to date has been slow and limited. It is urgent that civilians seeking safety from the bombardments, including those whose homes have been destroyed be provided safe passage. They further should not be forced to relocate to Russian-controlled territory.

“Genuine humanitarian corridors must be established quickly, effectively, and safely. Civilians must not be put at even more risk as they seek to escape the conflict,” said Agnès Callamard, Amnesty International’s Secretary General.

“The deliberate targeting of civilians and civilian objects and indiscriminate attacks are prohibited under international law. All unlawful attacks must cease. This pressing need for humanitarian corridors is a direct result of Russia’s betrayal of its legal obligations. Regrettably humanitarian corridors are needed urgently.

“The parties to the conflict must give absolute priority to civilians’ safe passage out of the conflict areas and into safe havens, meaning also not to those under Russian control. Russian forces must also immediately allow humanitarian aid to reach civilians who remain in their homes.”

Ukrainian authorities have requested that the routes should allow civilians from heavily bombed Mariupol, Enerhodar, Sumy, Izyum and Volnovakha to escape, and for residents of several towns close to Kyiv – including Bucha, Irpin and Hostomel – to reach the capital. Testimonies that Amnesty International have collected to date from civilians in several of these locations indicate they were prevented from leaving by continuous Russian shelling.

Amnesty International is calling on the parties to agree on establishing well-planned, safe humanitarian corridors and to respect such agreements in good faith; for civilians to be provided accessible transportation as well as sufficient time to safely exit, and for international observers to be granted access to monitor their safe passage.

“Civilians must be protected at all times. Safe and secure humanitarian corridors are a must, but unlawful attacks which are killing and injuring civilians must cease forthwith and comprehensively.” said Agnès Callamard.

“International humanitarian law prohibits attacks against civilians and civilian objects, indiscriminate and disproportionate attacks. Hospitals, schools and civilian infrastructure must be protected. Even wars have laws.”

The parties must grant impartial humanitarian relief organisations access to all civilians in need, including those who remain after evacuations. Russian forces must not employ the types of illegal sieges of civilians reminiscent of those they carried out in Grozny and Syria, subjecting them to indiscriminate bombardment, destroying infrastructure and leaving them with the choice to surrender or starve. Amnesty International also objects to any plan which would require civilians to relocate to areas they consider unsafe, including the occupied Crimea or Donbass regions of Ukraine, or Russia.

On Sunday 6 March, near the town of Irpin, a Kyiv suburb, Russian fire hit an evacuation crossing point, killing several civilians who were trying to flee.

One woman, who was in a convoy of 12 cars of civilians with signs marked ‘kids’ leaving Irpin, told Amnesty International they came under attack from Russian soldiers.

She said: “In two, three minutes [after they passed a destroyed tank] the shooting began. We know for sure that a 30-year-old woman died, [and a relative’s] mother died: she was 60, she was with me in the car.

“A shard or a bullet went two millimetres from my brother-in-law’s eye, [and] his arm is broken. Our driver has an issue with his ribs. I’m OK, a small wound close to my head, just blood… but in general, everything is fine with me. The other woman, who lost her mother… everything is OK with her too.”

Journalists filming in the area reported that another Russian attack occurred as civilians were streaming through an intersection, killing four people, including a woman and two of her children. Media also reported repeated firing and shelling in the area, raising concerns that these attacks were indiscriminate or disproportionate, violating the rules of international humanitarian law.

‘It isn’t possible to leave’

Amnesty International is concerned that certain groups will face particular challenges if they try to escape the conflict. In interviews with Ukrainian residents of threatened cities, the organisation learned of people with disabilities, older people, and people with health conditions who are less able to easily evacuate their homes, seek safety during attacks, or get medical care.

Elena Kozachenko, a 38-year-old from Chernihiv, has breast cancer and is currently undergoing chemotherapy. She said: “I have cancer and I need to get medication. I had my last round of chemotherapy on 23 February. My next chemotherapy is supposed to be 16 April. I need check-ups, but they are bombing all the time in the neighbourhood where the cancer hospital is, it’s too scary to go there.”

“I want to leave because staying in Ukraine [now] with my diagnosis is suicide. [But] it isn’t possible to leave… I’m afraid to evacuate because I’m a living target.”

Many older people impacted by the conflict face great difficulty in trying to flee or in seeking safety during attacks, and are often less willing to leave homes where they have lived for decades, or even their whole lives.

Rita, a 64-year-old family doctor in Kyiv, explained: “Kyiv is an old city, all of the older people, people with limited mobility, can’t get from their apartments to the basement. In our building they wanted to turn off the electricity [at night] so as not to attract bombardment… We said it would be a death sentence for the older people; if they can’t use the lift, they can’t leave their apartments at all.”

A member of the Kyiv regional council – who represents Irpin, Bucha, and other communities under Russian siege – added: “It’s mostly [older people] who are staying… It is more safe for them to stay than to go without money or food, because it’s in their native town – they know their neighbours. If they move out, they’re not sure somebody will help them; they don’t have the money to move.”

Tatyana Sobko, a 70-year-old in Kyiv, told Amnesty International: “We don’t want to leave, our children have tried to take us away many times… This is our home, how can you abandon your home and go sit somewhere abroad? How is that possible?… It’s our land and we won’t run away.”

Older people and people with disabilities, as well as other groups who may face particular risks and challenges in fleeing, should be prioritised for evacuation, as is outlined under international humanitarian law. Planning and communication about evacuations and safe humanitarian corridors must also be undertaken in an inclusive way, including by ensuring that information, transportation, and services are all accessible.

Interviewees across Ukraine also told Amnesty International of living in cramped conditions, and suffering severe shortages of food, water and medicine. Some have been unable to leave basements for days on end, due to relentless Russian shelling. They have also been experiencing loss of electricity, heating and communications for days.