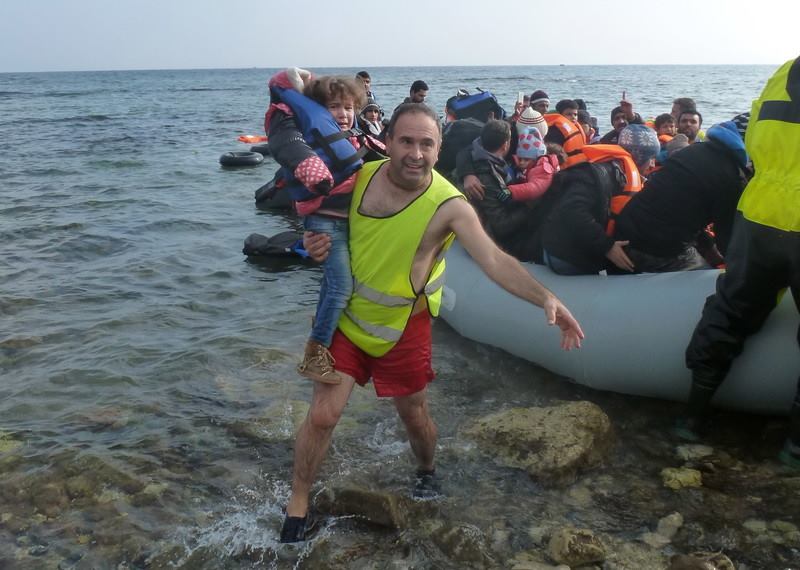 A Twist of Fate

“When I flew out to Lesvos, Greece, I had no idea my family would also be arriving on the island in a small rubber boat. That December day was sunny, bright and freezing. It was a very difficult moment that I never wanted to happen, ever. Nobody wanted to leave Syria. We are from Tartus, a beautiful city on the Mediterranean coast. But I was imprisoned for four years and tortured because of my journalism and human rights work, so I fled to the UK in 1999. My brother Safi ran a mobile phone shop in Tartus until last year, when somebody shot at it, and it became too dangerous to stay. My nephew, Mazin, was escaping forced recruitment into the army. So they fled to Lebanon, and reached Turkey in just a few days. Then the message came that they had paid someone to take them to Lesvos. I did my best to put them off the dangerous boat trip – I was ready to borrow money to keep them in Turkey. But their decision was to go, so of course I’d help them. I told them not to travel in the night because if you have an accident, you are more likely to drown. I told them to wear a raincoat and plastic bags on your feet, and that most lifejackets were fake. And to try not to scream because it scares the children.

The trip from the Turkish coast took an hour and 50 minutes. While I waited, I felt like I was somewhere else, in a bubble. The only person I recognised was Safi, even though we hadn’t seen each other in 18 years. My sister-in-law, Nina, was crying. She thought she had lost her baby because people had stepped on her belly in panic on the boat. My doctor colleagues checked her and found a heartbeat. I picked up so many children, including my three-year-old niece, Sirin – I didn’t know it was her until later. We went to register them in the official camp, Moria, but it was too busy. People were sleeping outside, and it was so cold. I had to rent somewhere for my family – refugees weren’t allowed to stay in a hotel or go in a taxi.
My family travelled on to Germany and all have residency there now. They’re going to language school and waiting for a kindergarten place. The locals are very nice to them. It’s amazingly positive. My sister-in-law told me: “I feel like a human being now.” And she has given birth to a healthy baby boy.

THE ONLY WAY TO SURVIVE

The hardest thing about being a refugee is when people make you feel unwanted, as if you came to take their wealth. People don’t come for jobs. Once I rescued a six-day-old baby, shaking with cold. I asked her very young mother why she came on her own. “A plane bombed us and so many people died,” she said. “So I took my baby and went on the boat, because I might survive.” Her husband disappeared when she was three months pregnant, and her relatives were killed, so what do you do? She is my icon. She is in Sweden now, still in a camp, but she and her baby are safe. Whenever I ask her how she is, she replies: “Happy. No barrel bombs.” So many people have told me they wouldn’t stay one day in Europe if there was a ceasefire in Syria. Fleeing is the only way for survive.

The situation in Greece is much worse now than when my family came over. Early in 2016, Moria became a closed detention centre because of a new agreement between the EU and Turkey, which threatens to send people back to Turkey. People are also stuck all over mainland Greece in terrible conditions, with very little support. When I volunteered in Athens recently I saw three-day-old babies being sent back from the hospital to live in tents in the terrible heat. There’s a real sense of despair. When people are welcomed they feel hope – they need that more than anything. They need to feel settled, and that they are not disturbing people. That gives people back their humanity and dignity. That’s why solutions like resettlement are so important. Being able to travel safely and legally to a country that will protect them means giving their children a future. No parent would want their children to be born in limbo – you’d want them to go to school, be safe and settled. Protection isn’t a gift for refugees: it’s a human right.”