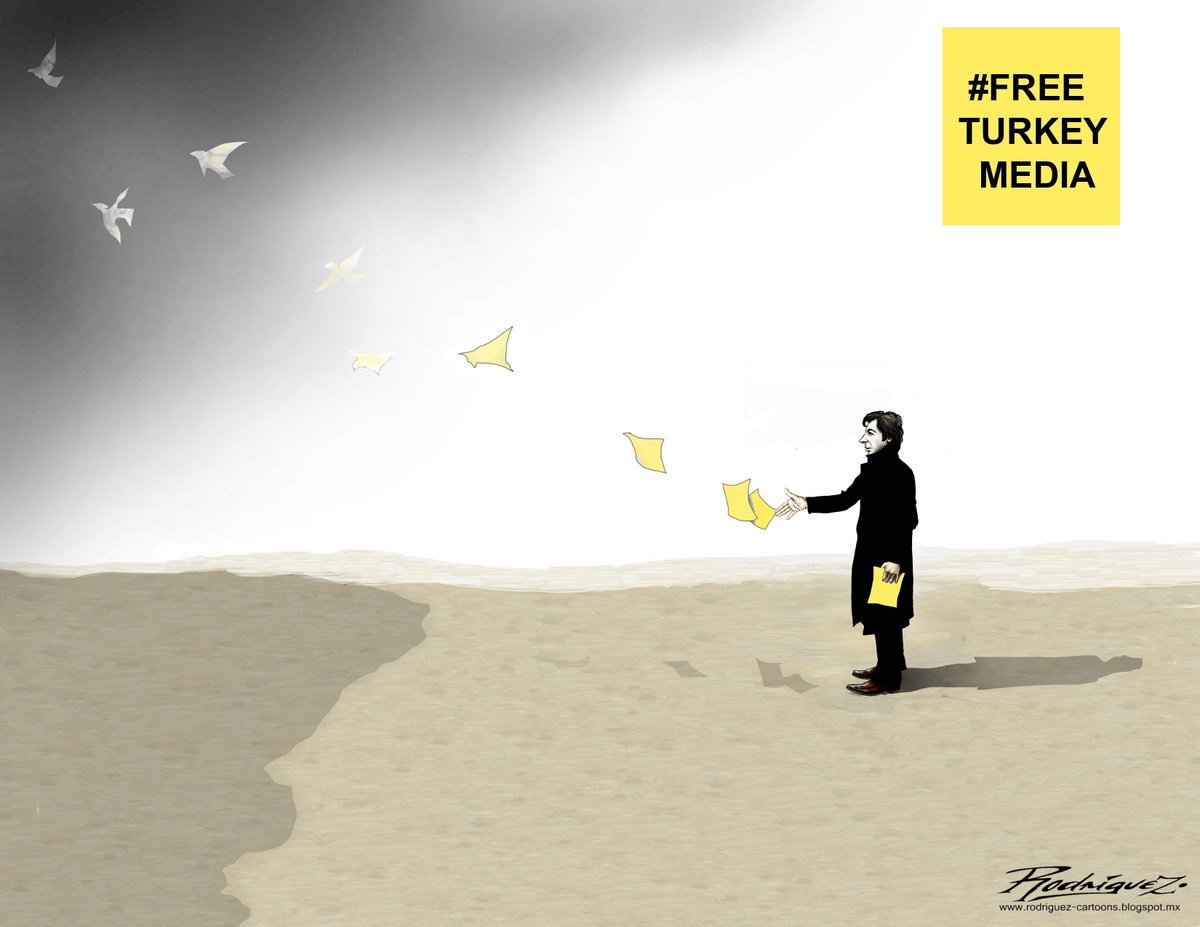 Turkey: “For journalists, Turkey has become a dungeon”

Journalists have spoken out about the stifling climate of fear that has enveloped Turkey’s media landscape, ahead of a global day of action to demand the release of more than 120 journalists still imprisoned since the failed 2016 coup.

The journalists spoke of the challenges they face in the wake of the crackdown and the urgent need for international solidarity. Some spoke from jail. Others, including the editor-in-chief of the opposition daily Cumhuriyet, had just been sentenced. All are under under constant threat of arbitrary detention, prosecution and conviction for nothing more than doing their jobs or for expressing peaceful opinions.

Zehra Doğan, artist and editor of the all-women Kurdish news agency, JINHA, shut down in October 2016, is serving a jail sentence of almost 3 years for a painting and news articles. She wrote from Diyarbakır prison:

“I am in prison but I am not a prisoner. Every day we are showing that art and journalism cannot not be incarcerated. We will continue our struggle and we will continue to say ‘journalism is not a crime’ until all journalists are free.”

“Working under the constant threat of arrest and conviction makes life extremely difficult but journalism is our profession. We have to carry it out. There is a plainly visible truth in Turkey, but there is also an attempt to hide it from society. Somebody has to speak about it, and that’s what we are trying to do.”

Hakkı Boltan of the Free Journalists Association which was shut down in November 2016, said:

“For journalists, Turkey has become a dungeon. We had 400 members when we were closed: 78 of them are now in prison. The only way this will change is if journalists around the world stand with us to build solidarity.”

“I love my country and I love my profession. I want freedom both in Turkey and around the world, not for myself, but for all jailed journalists and the only way to achieve this is through solidarity.”

As well as scores of journalists, others who have backed the campaign include artist Ai Weiwei, author Elif Shafak, actor and broadcaster Ross Kemp and dozens of cartoonists who have tweeted cartoons.

Their outspoken criticism comes as journalists and supporters around the world will take part in a global day of action for the Free Turkey Media campaign. The campaign, run by Amnesty International with the support of PEN, Reporters Without Borders (RSF), Article 19, Committee to Protect Journalists, Index on Censorship and other organisations.

“With elections approaching, Turkey needs a free media now more than ever. Brave journalists are continuing to do their job in a climate of fear and the world must show the Turkish authorities that we will not forget them or the scores of journalists languishing in jail.”

“In Turkey, what we are witnessing is an attempt to end all independent journalism. Turkey has become the world’s biggest jailer of journalists with some sentenced to life imprisonment simply for doing their jobs. As early as next week, with the verdict in the Zaman case, more could follow. The world cannot allow this to happen,” said Colm O’Gorman, Executive Director of Amnesty International Ireland.