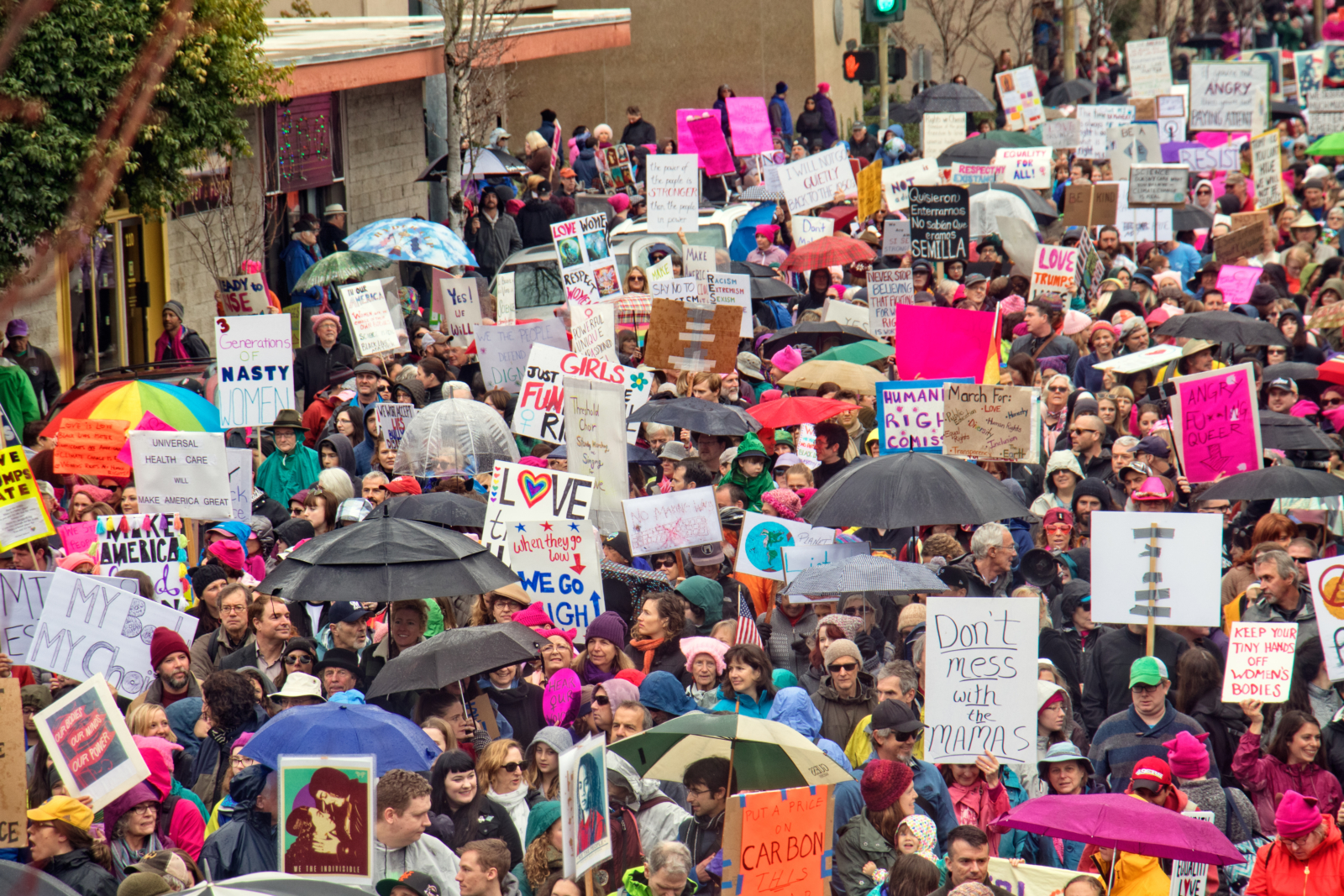 The image of a group of men in suits making decisions about the rights of women is becoming an emblematic sign of the backlash against our human rights, particularly those related to women´s bodily integrity and reproductive and sexual freedoms.

Just two days after the massive demonstrations for equality and against discrimination that took place in cities across the USA and around the world, President Donald Trump decided to put the rights of women at risk by reinstating the so-called “global gag rule”. The rule blocks US federal international funding for non-governmental organisations that provide abortion counselling or referrals, advocate to decriminalise abortion or expand abortion services – even though the US does not fund these services itself.

The global gag rule – also known as the Mexico City Policy – was first instated by Ronald Regan´s administration in 1984, and has been traditionally rejected by Democrat administrations only to be reinstated by Republican Presidents.

President Trump is now following a worrying tradition that has a dangerous impact on the sexual and reproductive rights, health and life of women and girls across the world, particularly those who are most at risk of human rights abuses. The gag rule during both Reagan and Bush´s administration was a barrier to comprehensive sexual and reproductive health in many parts of the Global South.

Trump´s version of the Gag rule expands the policy to all global US health funding, not just the US family planning funding through US foreign aid. This means that organizations working on other health issues, such as malaria, HIV/AIDS or maternal heath must make sure that their programs do not involve any abortion referral or information.

Many women´s rights organizations have conducted extensive research into the impact of the global gag rule. They found that the rule imposed significant cuts in funding for programs that provide family planning, HIV/AIDS treatment, emergency contraception, and other reproductive health-care services, alongside abortion services and information, particularly in Africa and Latin America.

A 2006 study by the Association for Women’s rights in Development (AWID) on the status of funding for women´s rights – “Where is the Money for Women´s Rights?”, also found that the women´s rights groups felt the gag rule affected women in particular ways, including by violating their rights to freedom of speech, association, and their ability to participate in the strengthening of their civil societies and democratic institutions.

This disastrous US policy also prevented health providers from complying with basic medical ethics. In countries where abortion was legal, for example, they could not provide the full range of legal reproductive health care nor could they refer or counsel parties as required by medical ethics. As a direct result, the Global Gag Rule will imperil women’s health and lives both in countries where abortion is legal, as well as where it is illegal.

In 2011, a Stanford University study found that organizations in Sub-Saharan Africa that refused to sign the global gag rule lost USAID funding, and as a result abortion rates increased in these countries to more than twice the rate prior to the Bush´s administration.

Evidence from countries where abortion services are safe, legal and accessible, shows that abortion related deaths and complications are greatly reduced. However, the global gag rule has thwarted in the past the efforts of abortion reform advocates to change restrictive laws.

The Guttmacher Institute calculates that between 2010 –2014, an estimated 6.5 million induced abortions occurred each year in Latin America and the Caribbean, and according to the Center for Reproductive Rights, more than an estimated 2,000 Latin American women die every year from unsafe abortions.

Abortion is completely banned in seven countries in the region – Chile, the Dominican Republic, El Salvador, Haiti, Honduras, Nicaragua and Suriname – even when the health or life of a woman or girl depend on it. Legal abortion upon request during the first trimester is available in Cuba, Mexico City, and Uruguay.

In most other countries in the region, even when legal, accessing life-saving abortions is incredibly difficult as some health professionals will refuse to practise them on ideological grounds.

The consequences of criminalising women who seek an abortion are well known: high maternal mortality and morbidity rates due to unsafe abortions that disproportionately affect women and girls living in poverty. Many women are forced to spend years behind bars after being accused of having an abortion.

Persistent gender discrimination and inequality in most countries across Latin America and the Caribbean is at the root of women and girls’ inability to exercise their human rights.

Discriminatory stereotypes remain deeply rooted in a patriarchal culture which still relegates women to the sphere of social reproduction – a culture widely promoted, in great part, by religious organizations including the Catholic Church and evangelical churches.

In past years, a second stronghold of opposition to women’s rights progression in the region has come from the United States.

The increasing influence of anti-abortion groups within the Republican Party has created a drift towards anti-abortion policies in some states. This has affected pro-choice and women´s rights organisations both directly, by the imposition of the gag rule, and also indirectly, through the legitimacy and strength given to anti-abortion discourses and proposals.

Latin American politicians have not been indifferent to these trends and have thus sought the support of US conservative forces and anti-abortion groups to strengthen their chances of winning office by negotiating the rights of women and proposing policies and legislation to criminalise abortion and further restrict women´s sexual and reproductive rights.

While discrimination against women is evident in almost all areas of life, it is in the area of sexual and reproductive health that it reaches shocking levels. It is the regulation of women’s sexuality and reproduction that most clearly reveals harmful gender stereotypes and bias.

Unfortunately, in this adverse regional context, and with the reinstatement of the global gag rule, the future for women and girls and their real chances of being able to exercise their human rights are tragically uncertain.

Today more than ever, a strong stand against these clear violations of women’s human rights needs to prevail. It is time to unite in action against discrimination and violence.

This article was originally published by IPS.