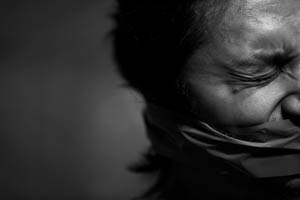 Torture Is More “Fun” in the Philippines

In January 2014, Amnesty International revealed the discovery of a secret torture cell in a police intelligence facility in Laguna, Philippines.

While the existence of such spaces in the country has been documented in testimonies of torture survivors including Filipino farmer Raymond Manalo in 2006 and Filipina-American university student Melissa Roxas in 2009, what was shocking this time around was the discovery of a “wheel of torture.”

In a game of “roulette,” police officers were physically abusing criminal suspects using a wheel painted with a range of torture practices:

Spin the wheel and land on “30 second ‘Paniki’ (Bats)” and a suspect is hung upside down like a bat for 30 seconds.

Land on “20 second Manny Pacman” and a suspect is punched non-stop for 20 seconds.

If by literally a very slim stroke of luck the wheel lands on a tiny slice in the wheel that reads ‘Hayahayyy,’ a suspect is given a pass.

In The Body In Pain, Harvard University professor Elaine Scarry (1985) reminds us that a torture room is not merely a place where torture occurs. It is also a weapon and agent of pain. So too are all the things in that room.

The “wheel of torture” points to a tragic and horrifying reality of Philippine democracy where pain, suffering and denial of justice for those governed have been sources of enjoyment, laughter and entertainment for those in positons of authority.

Torture is illegal in the Philippines. President Noynoy Aquino signed the Anti-Torture Act, which affirms the Philippine Government’s commitment to international prohibition against torture or other ill-treatment.

But five years since the law was passed, not a single official responsible for torture has been convicted.

Worse, police officers continue to practice electrocution, waterboarding, and other physical and mental abuses as methods to extract confessions from criminal suspects including Alfreda Disbarro and Jerryme Corre.

And with torture being used as a form of entertainment, one can’t help but wonder if the President and police officials can ever get “serious” about ending torture when torture is more “fun” in the Philippines.