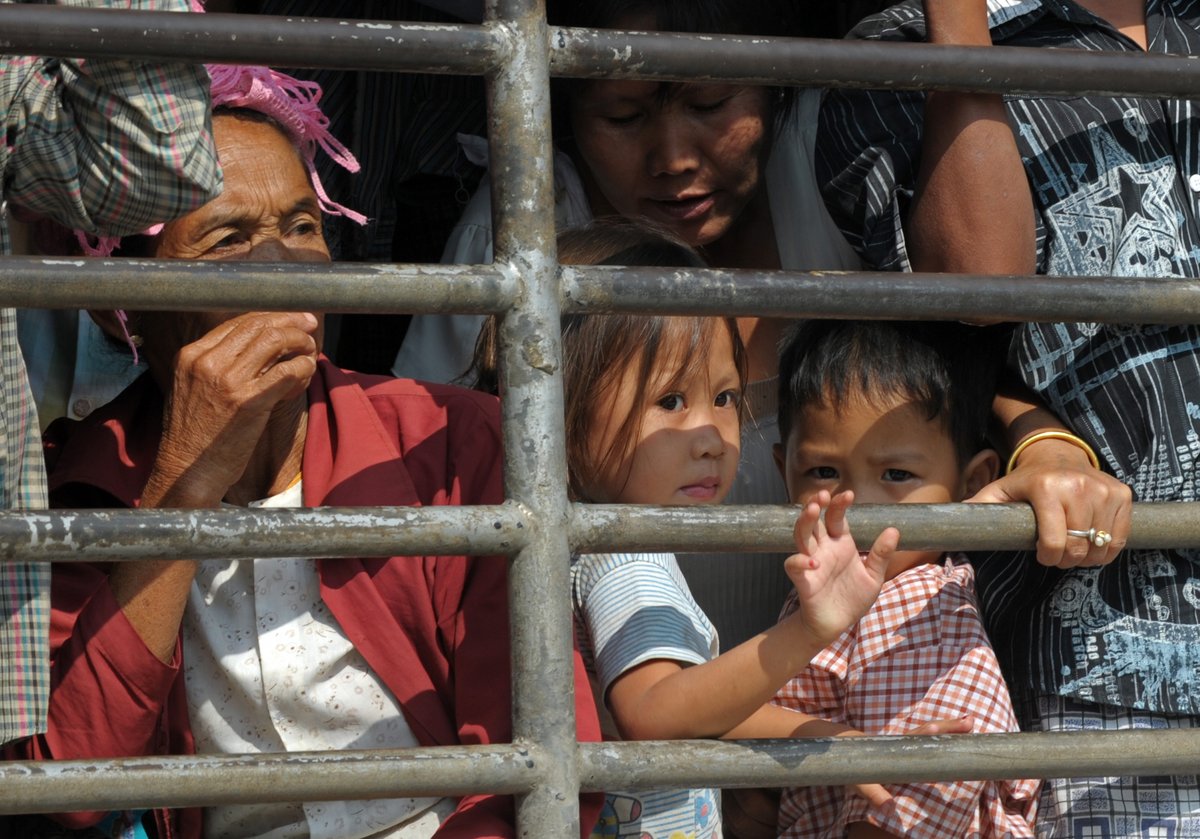 Authorities must not “push-back” Rohingya fleeing violence in Myanmar.

With the world’s fastest growing refugee crisis developing on its doorstep, Thailand must take concrete action to reverse its long-standing failure to offer protection to those most in need, Amnesty International said today as it launched a report revealing gaping holes in the country’s refugee policies. Between a Rock and a Hard Place outlines a number of failures by the Thai government in policy and practice that have a devastating impact on refugees both within the country and seeking safety there. These include Thailand’s long-standing practice of using its navy to repel boats carrying thousands of desperate Rohingya refugees and Bangladeshis; as well as its forcible return of refugees and asylum-seekers to places where they risk torture and other serious human rights violations.

“With ethnic cleansing forcing hundreds of thousands of Rohingya out of Myanmar, Thailand urgently needs to set a regional example by adopting humane refugee policies. Instead of callously repelling people fleeing unimaginable horrors, the Thai government should ensure safe passage for those seeking international protection in Thailand. Thailand hosts one of the largest refugee populations in the region, but its ad hoc policies mean it fails to offer them proper protection. The authorities cannot continue to lurch from one refugee crisis to the next. They must set up the systems required to offer the men, women and children who are at risk the safety and security they need,” said Colm O’Gorman, Executive Director of Amnesty International Ireland.

In 2015, at the height of the South East Asian “boat crisis”, the Thai navy refused entry to boats carrying thousands of desperate Rohingya refugees, continuing a long-standing “push-back” policy in place during previous Thai governments. Those who were denied entry to Thailand were forced to continue dangerous sea journeys to Indonesia or Malaysia. UNHCR estimated that 370 people died at sea during the crisis, but Amnesty International has raised concerns that the number of deaths could have been much higher.

In the past month, the Rohingya situation has escalated to critical proportions as a vicious program of ethnic cleansing targeting the population in western Myanmar has caused more than 400,000 refugees to flee the country. In spite of this exodus, Thai authorities have sent mixed messages regarding their policy toward the Rohingya. A month ago, Prime Minister Prayut Chan-O-Cha stated that authorities were “preparing to receive” Rohingya fleeing Myanmar. More recently, a Thai military officer indicated that the Thai navy would push out to sea boats carrying Rohingya refugees should they arrive in Thai waters.

In the past three years, the Thai government has acquiesced to pressure from foreign governments and forcibly returned people to countries where their lives and well-being are at serious risk. Such returns violate the international legal principle of non-refoulement, an absolute ban on returning people to territories where they are at real risk of persecution or other serious human rights violations. Amnesty International followed four cases of forcible returns involving more than one hundred people from China, Turkey and Bahrain. Many of these individuals have subsequently suffered arbitrary arrest, torture and other forms of ill-treatment. The status and conditions of some of the returnees is unknown.

The most recent case occurred in May 2017, when Thailand assisted in the extradition of the Turkish national Muhammet Furkan Sökmen from Myanmar to Turkey. Sökmen was detained by Thai immigration officials in a Bangkok airport for approximately 24 hours before being handed over to the Turkish authorities. Thai officials assisted in Sökmen’s extradition despite warnings from the UN that he was at serious risk of human rights violations in his home country, where authorities have launched a far-reaching crackdown in the wake of an attempted coup in July last year. Sökmen was arrested and detained after arriving in Istanbul because of his alleged connection to opponents of the Turkish government. The current status of the criminal proceedings against him is unknown.

In a similar incident, Thailand drew widespread international condemnation in 2015 after it sent 109 asylum seekers from the Uighur minority back to China, where the group has faced severe persecution for decades.

“Thailand has paid lip service to improving protections for refugees, but this has not translated into real actions. Authorities continue to do foreign governments’ bidding and send refugees back to countries where they could face torture and other human rights violations. These callous actions fly in the face of Thailand’s international obligations and must be stopped immediately,” said Colm O’Gorman.

Gaping holes in Thailand’s legal framework leave refugees and asylum-seekers without legal status and therefore vulnerable to abuse. This is particularly true for more than 7,000 asylum seekers who currently live in urban areas. Urban refugees and asylum-seekers, even those officially registered with the UN Refugee Agency, UNHCR, can be arrested at any time under the 1979 Immigration Act that criminalises irregular entry and stay in Thailand. Following their arrest, most refugees and asylum-seekers are sent to immigration detention centres where they can be held indefinitely in appalling conditions described by refugee rights advocates as “worse than prison”. Former detainees described frequent abuse by guards and other detainees and cells so overcrowded that they had to sleep in shifts.

In constant fear of arrest and detention, refugees and asylum-seekers often live in miserable conditions, confined to their homes and cut off from social interactions. Many struggle to find employment, access medical care or even feed themselves and their families. In what amounts to “constructive refoulement”, many choose to give up their asylum claims and return to their home countries rather than face the unbearable hardships of refugee life in Thailand.

“Joseph” is a Pakistani Christian human rights activist who fled to Thailand with his family after they were threatened because of their faith and Joseph’s work. They were joined in Thailand by Joseph’s sister-in-law, who escaped after being kidnapped, forced to convert to Islam, and forcibly married to a Muslim man. In 2016, two years after arriving in Thailand, the family abandoned their asylum claim and returned to Pakistan because their life in Thailand had become untenable. Joseph told Amnesty International: “We were without money. We didn’t have anything to eat at that time…We were hungry and we were also trying to hide from the police. We didn’t have food continuously for four or five days.” Joseph’s sister-in-law, who had been arrested in Bangkok six months earlier, also chose to return to Pakistan rather than remain in an immigration detention centre. After returning to his home country, Joseph’s home was burned down, killing his father. His sister-in-law was again abducted and returned to the household of the man she had previously been forced to marry.

Thailand has also committed to developing a process for screening refugees and irregular migrants and to passing anti-torture legislation containing a non-refoulement provision. If implemented in line with international standards, these initiatives could represent significant steps towards protecting the rights of refugees and asylum-seekers in Thailand.

“While the Thai government should be commended for its role in hosting hundreds of thousands of refugees over a period spanning decades, its recent actions have too often manifested the utmost disregard for the rights of men, women and children desperately in need of protection. The Thai government needs to turn rhetoric into action. Instead of caving in to the demands of foreign governments to return those fleeing persecution and violence, authorities should work to ensure that refugees’ rights are firmly protected under Thai law,” said Colm O’Gorman.