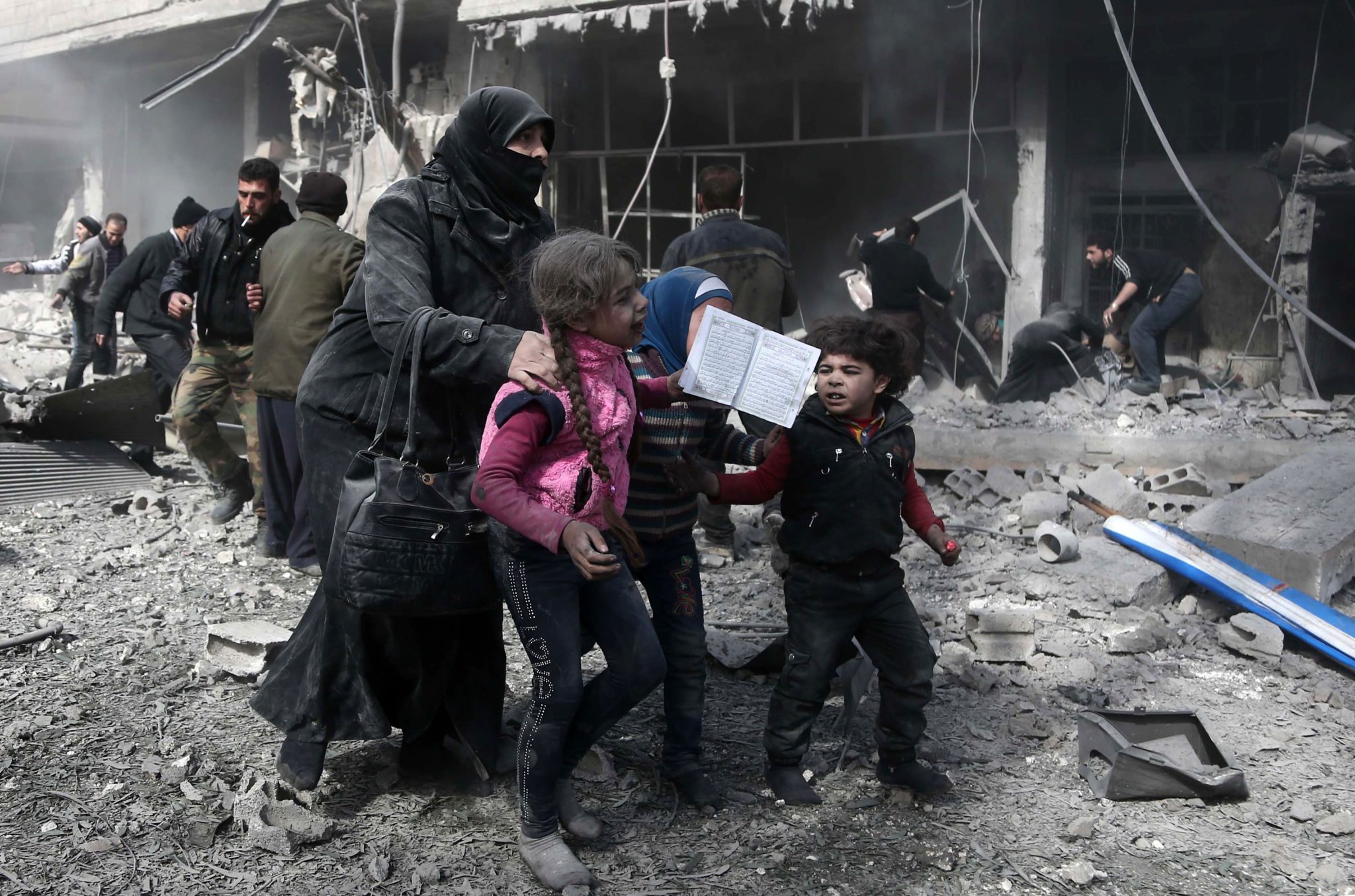 Syria’s Eastern Ghouta: They fight for life. We fight for them.

What does it feel like to go hungry for days? To be unable to provide your ailing children with food and medicine? To wash your food with dirty contaminated water? What does it feel like to go sleepless for long nights under bombing and shelling, terrified for your family’s lives and yours? To watch your house burn down and your beloved town disappear under never-ending piles of rubble? I can’t help but think of these questions every day, as I speak to people trapped inside Syria’s Eastern Ghouta.

This is the reality there today. An area in Damascus countryside, no bigger than 100 km2, has been home to 400,000 people trapped under siege by Syrian government forces since late 2012, suffering severe shortages of food, water, medicine and other crucial supplies. Furthermore, the situation in Eastern Ghouta worsened in November 2017, as the Syrian government – backed by Russia — tightened the siege and escalated its bombardment campaign, deliberately targeting civilians and civilian infrastructure including hospitals and markets.

Despite the international outcry and the adoption of UN Security Council resolution 2401 on 24 February demanding a 30-day cessation of hostilities in Syria to enable humanitarian aid delivery, the daily bombing has continued, forcing the UN aid convoy which entered on 5 March – the first since November – to leave Eastern Ghouta having delivered only part of it aid.

There are many urgent medical cases that need evacuation such as cancer, cardiac diseases, serious injuries and kidney diseases. Most of these cases are treatable outside Ghouta, but here, due to the siege, they can’t be treated.

It has been seven years of atrocities in Syria. Seven years of death, destruction, fear and pain in Aleppo, Homs, Deir Ezzor, Raqqa, Idlib, Afrin and many other towns, cities and homes. For six of these seven years, civilians in Eastern Ghouta have been under an unlawful siege. Yet, it continues to survive.

When I speak to people trapped inside Eastern Ghouta, starved, exhausted and angry, yet brave and determined, fighting for life, tooth and nail, I feel humbled and inspired. Eastern Ghouta is marked by death, but also by the resilience of those pushing to survive. Their tragedy puts the world to shame, but their strength and defiance should rouse us to action.

On the seventh anniversary of the Syrian crisis, we move beyond hopes, wishes and prayers. Today, we remember, demand and act for Eastern Ghouta as the death toll continues to rise, exceeding 420 deaths. We must continue to demand that Syrian President Bashar Al-Assad and Russian President Vladimir Putin put an end to the attacks on civilians and lift the siege on Eastern Ghouta immediately.

We want the UN to exert pressure to lift the siege on civilians; there are women, children and patients among us. We have more than 100,000 children suffering chronic and severe diseases with no medication available. The malnutrition cases we have are a shame to humanity. 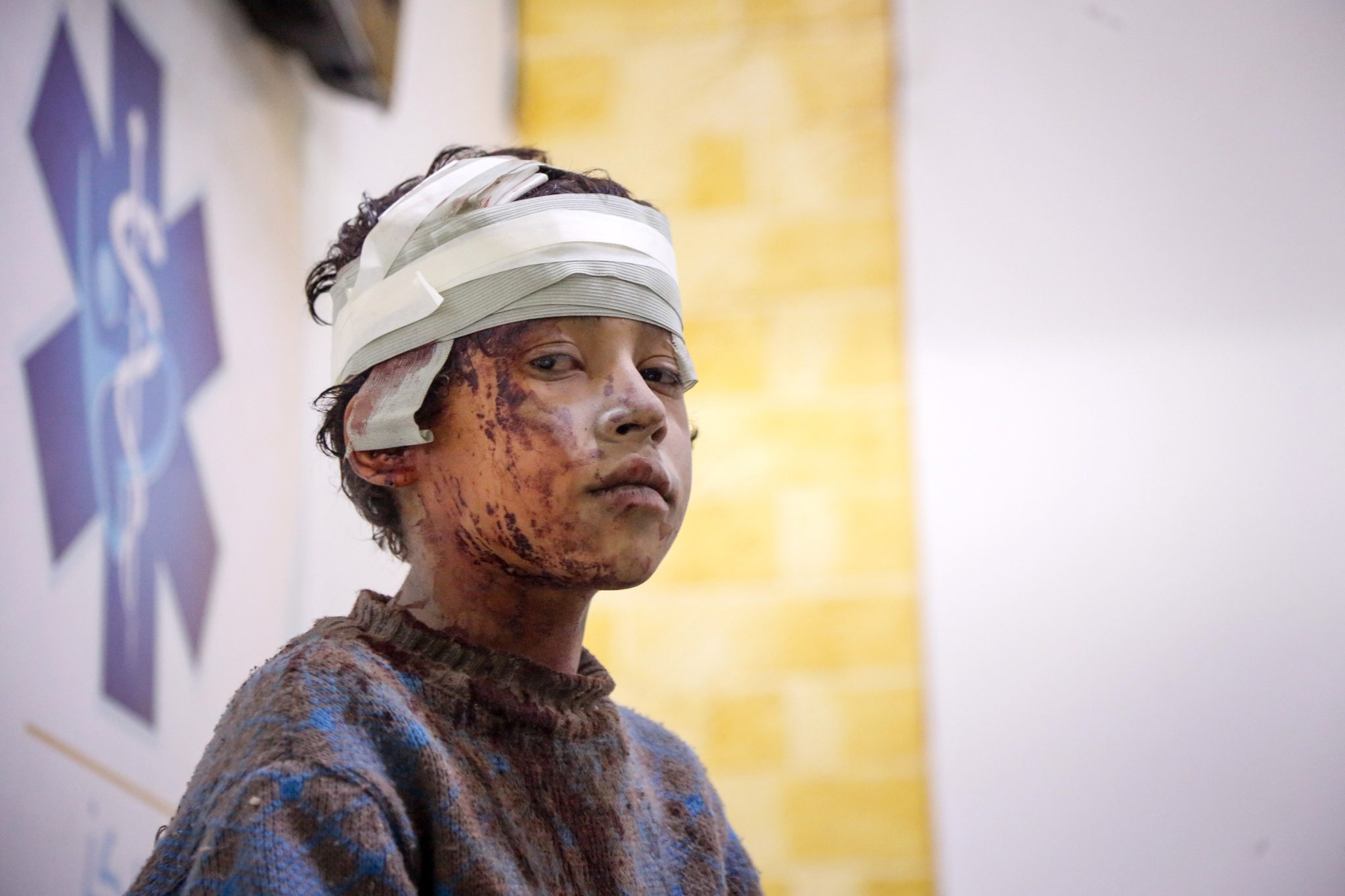 A wounded Syrian child with a bandage on his head is seen at a field hospital after Assad Regime’s attacks in Eastern Ghouta.