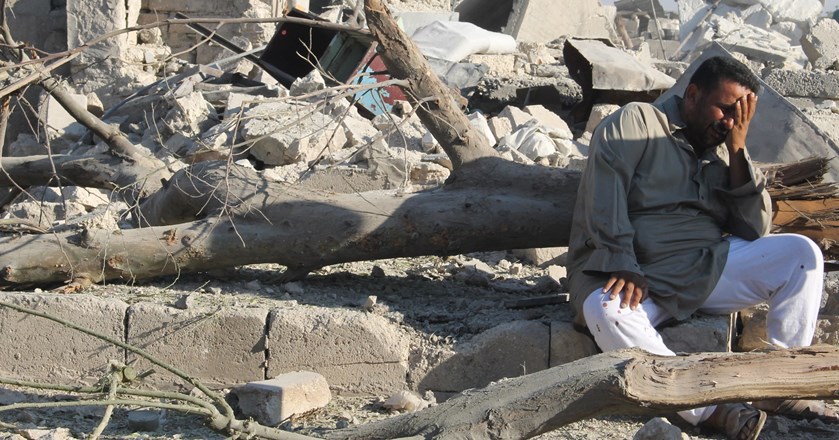 The terrifying reality of the Syrian government’s relentless barrel bombing of the besieged city of Daraya, outside Damascus, is made brutally clear in a new video released by Amnesty International today amid the latest round of peace talks in Geneva. The organisation hopes the harrowing eyewitness footage will spur the international community to re-double its demands on the Syrian government to grant immediate lifesaving humanitarian access to Daraya and all areas still under siege.

Although no barrel bombs have been dropped on Daraya since the partial “cessation of hostilities” came into effect on 26 February, there have been attacks with other weaponry and thousands of civilians who remain in the city continue to suffer from severe food and medical shortages and no electricity.

“This video conveys the sheer terror experienced by besieged civilians coming under relentless pummelling by the Syrian government’s barrel bombs. This video shows in shocking close-up detail what civilians in Daraya have had to live through. It is absolutely outrageous – though not surprising – that the Syrian government has continued to bombard and starve its own civilians. And it is unacceptable that the UN and other influential international players are not doing more to address the critical situation in Daraya and other besieged locations,” said Colm O’Gorman, Executive Director of Amnesty International Ireland.

Barrel bombs are crude but deadly weapons fashioned out of oil barrels, fuel tanks or gas cylinders which are packed with explosives, fuel, and metal fragments and dropped from helicopters and planes. They are by definition imprecise and must never be used in the vicinity of civilians. Daraya has endured thousands of barrel bombs on top of more than three years of crippling siege by Syrian government forces. According to data collected by the Local Council of Daraya City, around 6,800 barrel bombs have been dropped there between January 2014 until the “cessation of hostilities” agreement on 26 February 2016.

The resulting damage and destruction is evident from countless videos and other images. At least 42 civilians, including 17 children, have been killed by these imprecise explosive weapons. According to local activists, a further 1,200 civilians have been injured. Local activists believe that the death toll would almost certainly be higher except for the fact that residents have become so used to rushing to shelters whenever helicopters are spotted. Most of Daraya’s original residents fled the devastation years ago and now only between 4,000 and 8,000 remain, a fraction of its original population.

The video, shot by civilians in Daraya between 2014 and late February 2016, includes footage that has never before been made public. It shows scenes of Syrian government forces’ barrel bombs falling and exploding inside the city, interspersed with civilians – including children and the elderly – describing the sheer terror of living under such relentless attacks in a city under siege.

“They want to kill me,” a bespectacled young girl with curly hair says when asked about the bombs.

In another harrowing scene, an injured young boy lies alongside the corpse of his brother who was killed in a barrel bomb attack, weeping and begging: “My brother, please don’t leave me.”

“It is difficult even to imagine the scale and depth of human suffering endured by civilians in Daraya and other besieged areas of Syria, some of which have received no humanitarian aid during years of fighting. Every day that goes by without aid delivery means that the humanitarian crisis in Daraya worsens. With peace talks again under way in Geneva, it is absolutely crucial that opening humanitarian access to such areas is a priority. While many of the guns have mostly fallen silent and the barrage of bombs onto Daraya has stopped since the 26 February ceasefire, the threat that they might one day return must be taken off the table for good. And there must be accountability for all those responsible for war crimes during the conflict,” said Colm O’Gorman.

In addition to widespread and large-scale destruction caused by the thousands of barrel bombs dropped on Daraya, government forces have cut off the city and not allowed any humanitarian aid at all since November 2012.

Medical workers are severely under-resourced to cope with the scale of the humanitarian crisis they face. The besieged city’s only remaining field hospital has been targeted 15 times by government forces. Daraya’s Medical Office sent Amnesty International lists of more than 100 medicines, supplies and equipment it urgently needs. Among the items they lack are: antibiotics, painkillers and anaesthetics; disinfectants and other cleaning supplies; and equipment including dialysis machines, CT scanners and hospital beds and cots.

As of 26 March, one month after the “cessation of hostilities” came into effect, the Syrian government had not granted humanitarian access to at least six besieged areas, including parts of Eastern Ghouta and Daraya, despite repeated requests from the UN, according to a report of the UN Secretary-General to the Security Council.

The Syrian government must allow urgently needed aid to get into to Daraya, in compliance with its obligations under international humanitarian law and binding UN Security Council resolutions. The International Syria Support Group and UN agencies, especially the Office for the Coordination of Humanitarian Affairs (OCHA), must ensure this is made to happen for Daraya and all other besieged locations.

In May 2015, Amnesty International released a report, ‘Death everywhere’: War crimes and human rights abuses in Aleppo, which documented the sheer terror of civilians living under relentless barrel bomb an other attacks by Syrian government forces in Aleppo.

In June 2014, Amnesty International released its Updated briefing on sieges across Syria, which documented the effect of sieges on civilians in Daraya and other areas.