Syria: UN must not cut vital aid lifeline to north-west amid Russian and Syrian war crimes

The UN Security Council must not cut a vital aid lifeline for civilians in the context of war crimes and crimes against humanity in north-west Syria, Amnesty International urged today, as a resolution allowing humanitarian assistance to reach Idlib across Syria’s borders is set to expire in the coming weeks.

A new Amnesty International report, ‘Nowhere is safe for us’: Unlawful attacks and mass displacement in north-west Syria, details 18 cases – the majority in January and February 2020 – where Syrian and/or Russian government forces targeted medical facilities and schools in Idlib, western Aleppo and north-western Hama governorates.

As a result, before the 5 March ceasefire almost 1 million people in Idlib – many of whom had been displaced repeatedly – were forced to flee again and languished in dire conditions in recent months.

“Even by the standards of Syria’s calamitous nine-year crisis, the displacement and humanitarian emergency sparked by the latest onslaught on Idlib has been unprecedented. The UN Security Council must not cut the vital lifeline of cross-border humanitarian aid while thousands of lives hang in the balance,” said Heba Morayef, Amnesty International’s Middle East and North Africa Director.

“The latest offensive continued an abhorrent pattern of widespread and systematic attacks aimed at terrorizing the civilian population. Meanwhile, Russia has continued to provide invaluable military support – including by directly carrying out unlawful air strikes – despite evidence that it is facilitating the Syrian military’s commission of war crimes and crimes against humanity.” 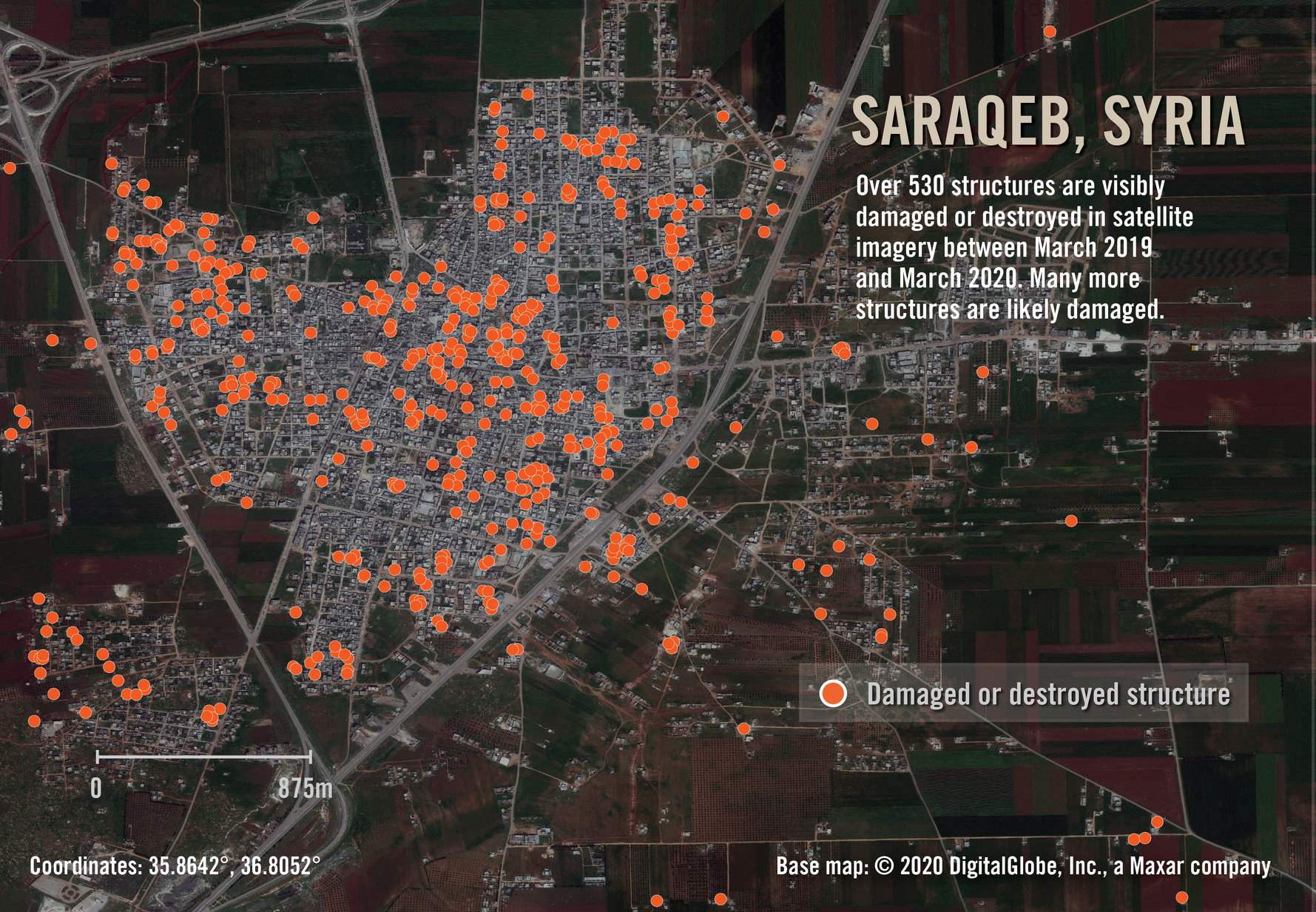 Satellite imagery analysis showing structures assessed to have been damaged or destroyed in Saraqeb, Idlib, between March 2019 and March 2020. ©Maxar Technologies

Amnesty International interviewed 74 people for the report, including internally displaced people, teachers, doctors and humanitarian workers. Witness accounts were corroborated by videos and photographs as well as expert analysis of satellite imagery, reports by flight spotters on the ground and intercepted Russian and Syrian air force flight communications.

These audio recordings of transmissions from the cockpits of warplanes provide strong evidence of the Russian military’s involvement in at least one unlawful attack that put a hospital out of service.

According to the Idlib Health Directorate, Syrian or Russian attacks damaged or destroyed 10 medical facilities in Idlib and Aleppo between December 2019 and February 2020, killing nine medical and other staff. Dozens of other medical facilities had to close altogether. 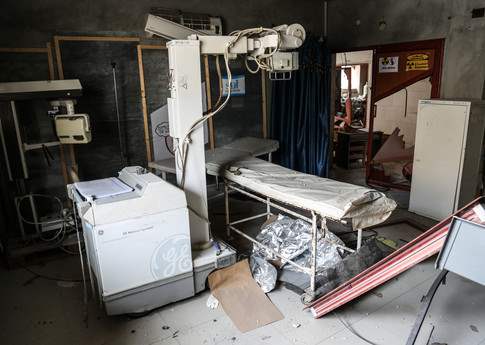 A doctor who survived one of these attacks – three Russian air strikes that hit the vicinity of al-Shami hospital in Ariha on 29 January 2020 – told Amnesty International that the strikes flattened at least two residential buildings around the hospital, killing 11 civilians including one of his colleagues, and injuring more than 30 others.

“I felt so helpless. My friend and colleague dying, children and women screaming outside,” he said, adding that “it took the civil defence two days to remove the bodies” from the rubble.

Based on corroborating witness statements and other credible information, particularly observations by flight spotters, Amnesty International concluded this unlawful attack was carried out by Russian forces. 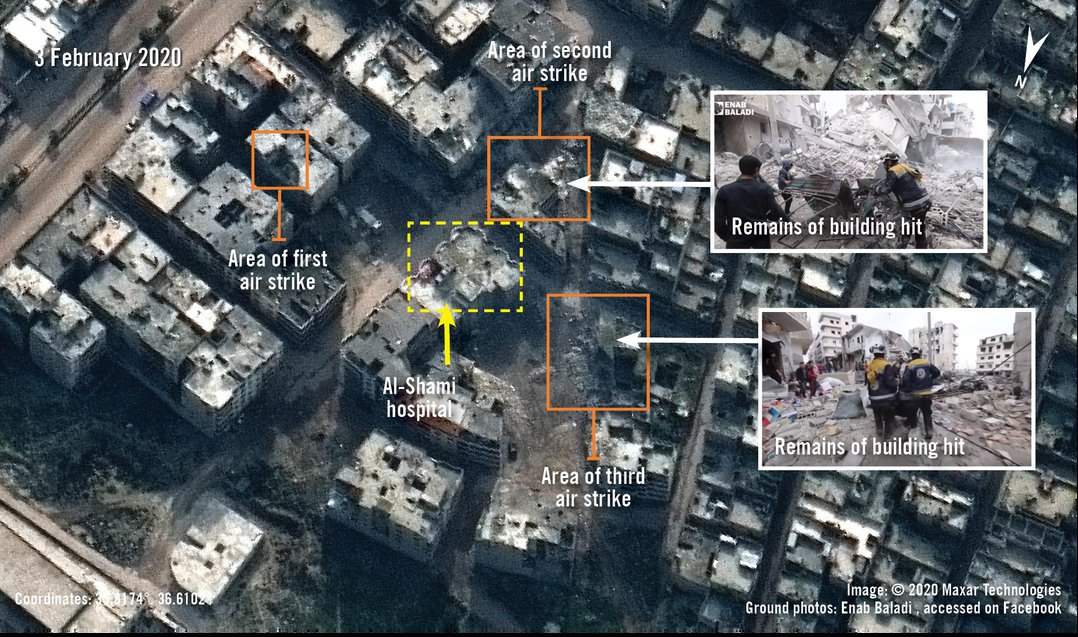 Satellite imagery taken on 3 February 2020 showing al-Shami hospital and its environs after the three air strikes that took place on 29 January 2020. Damage to adjacent buildings is visible in the orange squares. ©Maxar Technologies The inset photographs, taken on 30 January 2020, show civil defence volunteers inspecting the remains of the building hit in the second and third air strike. ©Enab Baladi

According to the Hurras Network (Syrian Child Protection Network), a Syrian NGO, 28 schools were hit by air and ground attacks in January and February 2020. Ten schools were targeted on a single day alone – 25 February – killing nine civilians.

Amnesty International investigated attacks on six schools in this period, which included the Syrian forces’ use of air-dropped barrel bombs and ground-fired cluster munitions against two schools on 28 January and 25 February, respectively.

“A [cluster munition] bomblet exploded close to my feet, blowing the flesh off… The pain was unbearable. I felt heat as if my feet were burning. Two students were walking in front of me. One died instantly and the other one, miraculously, survived. I am sure it was a cluster munition because I heard several explosions. I know the sound of a cluster munition attack very well. You hear a series of small explosions. As if the sky were raining shrapnel instead of water.”

mnesty International identified the remnant as a surface-fired, 220mm 9M27K cargo rocket, manufactured in Russia and transferred to the Syrian army. It contains 9N210 or 9N235 cluster munitions, which are prohibited under international law.

The incidents documented in the report exemplify how Syrian and Russian forces continue to deliberately target civilians and civilian objects. These are serious violations of international humanitarian law, which requires warring parties to distinguish between military targets and fighters, and civilian objects and civilians, and to direct their attacks only at the former. They are also war crimes and those who order or commit such acts are criminally liable. In addition to the immunity from attack deriving from their status as civilian objects or civilians, hospitals and other medical facilities, health workers and children are also subject to special protections during armed conflict.

Additionally, many of the medical facilities targeted were on a “deconfliction” list the UN previously shared with Russian, Turkish and US-led Coalition forces in Syria to highlight which sites must not be attacked.

The latest onslaught on Idlib forced close to a million people – more than 80% of them women and children – to flee towards areas close to the Turkish border between December 2019 and March 2020.

A woman who has three children and whose family was displaced twice in the past eight months told Amnesty International: “My daughter, who’s in first grade, is always afraid… She asked me [after we were displaced]: ‘Why doesn’t God kill us?… Nowhere is safe for us.’”

Cornered in an ever-shrinking space, these civilians continue to suffer intolerable living conditions amid a massively overstretched humanitarian response. Timely and sustained aid is needed more than ever.

In July 2014, the UN Security Council unanimously passed a resolution authorizing cross-border aid into north-west Syria and other parts of the country held by armed opposition groups, without requiring the consent of the Syrian government. The resolution has been repeatedly extended since then – although with extreme difficulty in recent years and a reduction of scope in January 2020. It is due to expire on 10 July. 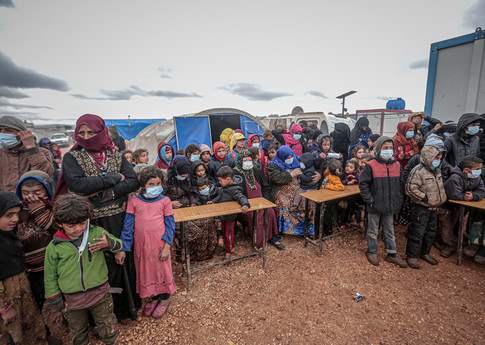 People, mostly children, wear masks as a preventive measure against COVID-19 as Idlib Health Directorate and Civil Defense Crews along with local charities carry out disinfection works at schools and tent cities in Idlib, Syria on 18 March, 2020. © Anadolu Agency/Getty Images

Syria and its allies are seeking to end this arrangement and channel aid through Damascus instead, which would make it very difficult for the UN and its humanitarian partners to deliver timely and sustained aid. The government has regularly sought to restrict aid operations through bureaucratic requirements. It has also “blacklisted” and persecuted aid workers associated with opposition-held areas. Armed groups like Hay’at Tahrir al-Sham have also hampered humanitarian organisations from doing their jobs effectively.

“UN officials have already called Idlib a humanitarian ‘horror story’ – this will only worsen unless the Security Council sees beyond political ploys and sustains the precious lifeline of cross-border humanitarian aid,” said Heba Morayef. 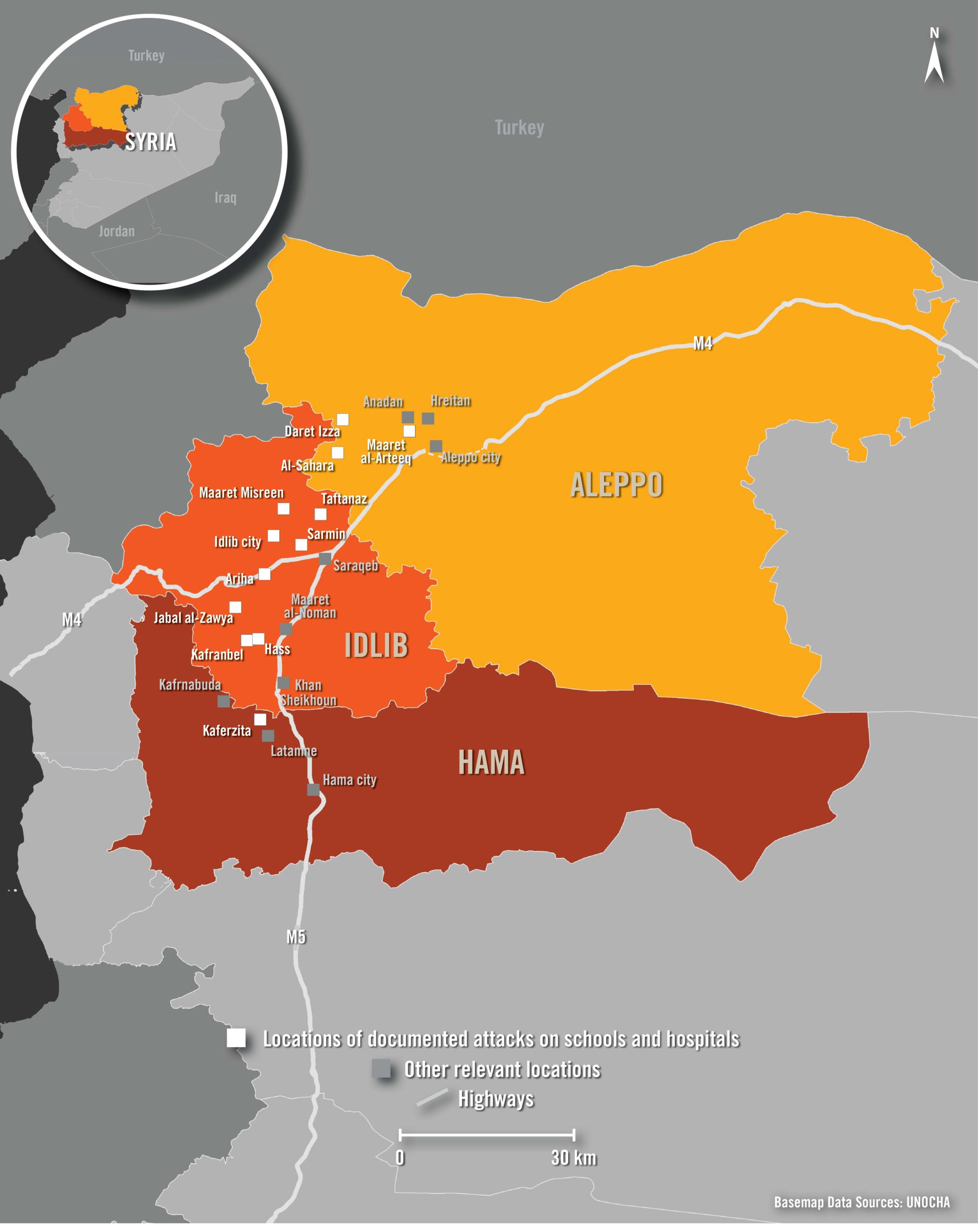