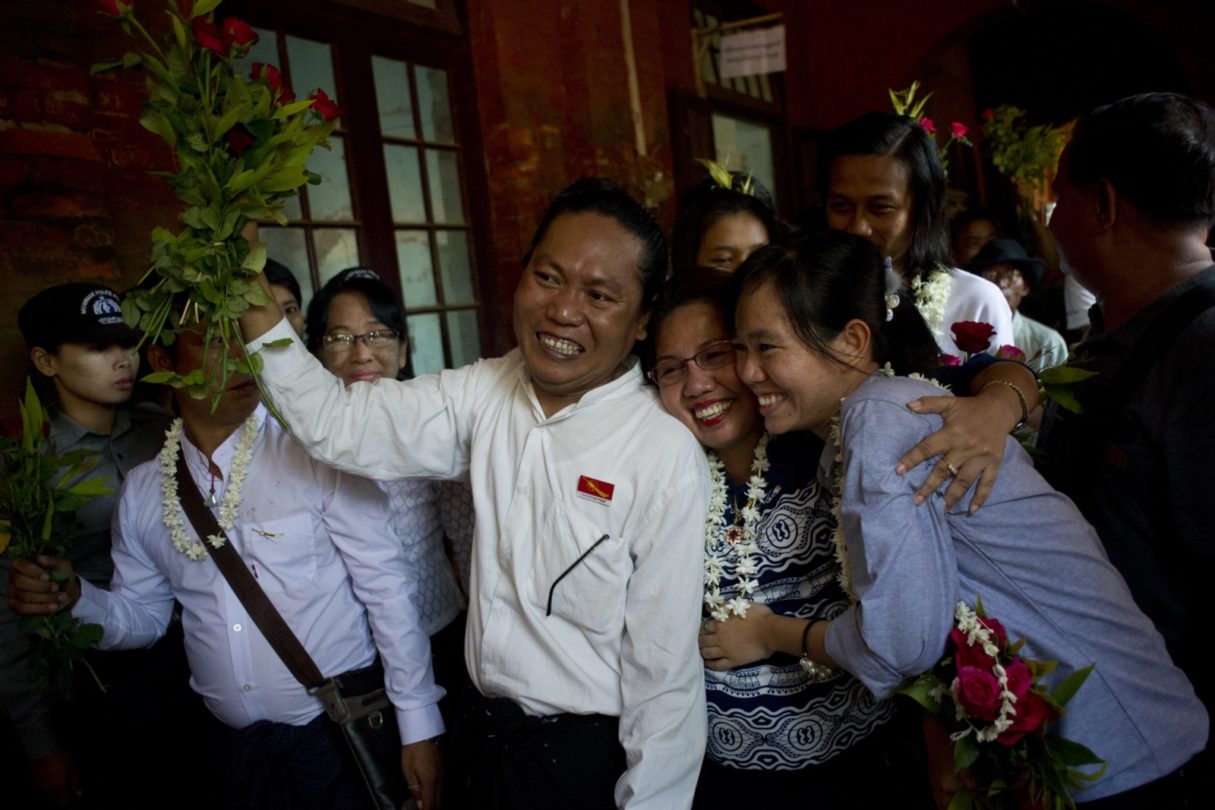 Myanmar has released scores of student activists imprisoned simply for exercising their human rights, including student union leader Phyoe Phyoe Aung and her husband Lin Htet Naing. Amnesty called for their release as part of the 2016 Write for Rights campaign, gaining 394,000 actions worldwide.

All charges dropped in prisoner amnesty

At a court in the town of Tharrawaddy, the student activists had all charges against them dropped.

The releases follow the government’s announcement on 7 April that it would work to release all prisoners of conscience at the first possible opportunity. We are extremely glad to see that promise start being fulfilled.

Releasing the students sends a strong message that the government of Myanmar intends to stop punishing people for expressing political beliefs. We now look forward to the release of all other prisoners of conscience in the country.

Phyoe Phyoe Aung was imprisoned on 10 March 2015 for charges relating to student demonstrations she helped organise in February and March 2015. The students were protesting against a new education law passed by the government the previous year, which the protesters say limits free speech and democracy in the education system.

Both Phyoe Phyoe Aung and Lin Htet Naing were prisoners of conscience – jailed for peacefully exercised their human right to free speech by criticising the government and attending protests.

In the past, student-led protests have evolved into calls for wider political change. Phyoe Phyoe Aung and Lin Htet Naing were imprisoned following their part in organising the student unions to demonstrate in 2007 – protests that became the ‘Saffron Revolution’. The police violently cracked down on the protesters, and Phyoe Phyoe Aung served over three years in prison for her association with the demonstrations – including a month in solitary confinement.

On 30 September 2014, the government of Myanmar adopted the National Education Law. Student unions say that under the new law, universities are not independent from the Ministry of Education. The law outlaws student and teacher unions, as well as stopping classes being taught in minority languages in higher education.

The protests took place, and on 10 March police responded with force, beating protesters with batons, even when they had fallen to the ground. Phyoe Phyoe Aung tried to negotiate a peaceful ending to the stand-off with police, but when they started using force she took refuge with others in a nearby monastery. Police surrounded the monastery; Phyoe Phyoe Aung and a friend approached them and offered to disperse the protest if the police refrained from using violence. Instead, the students were handcuffed, sat down in rows and beaten over the heads with batons.

The students were imprisoned and charged with criminal offences, including:

Many of the students had their charges dropped on 8 April 2016, when they were freed without conditions.