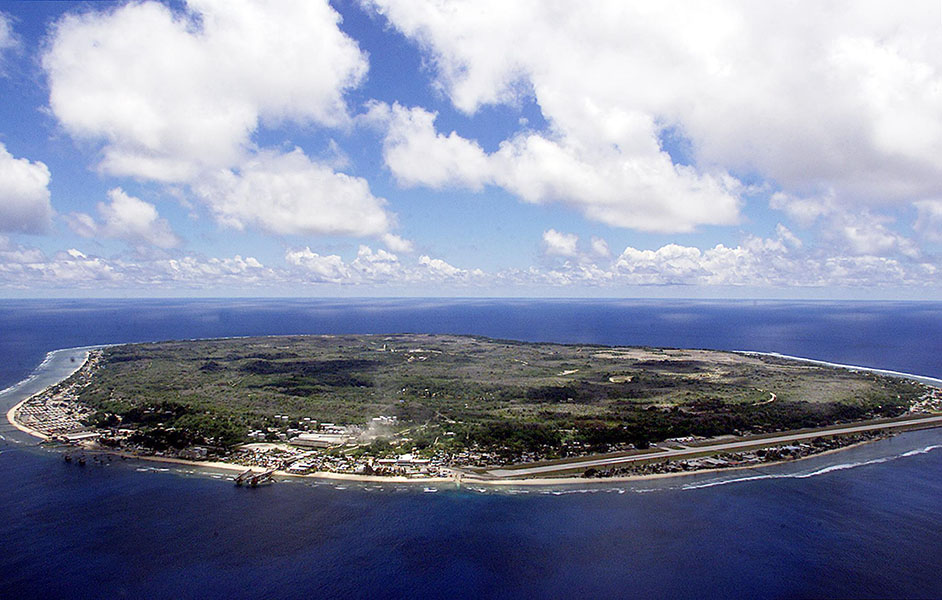 A major corporation responsible for running the Australian government’s refugee “processing” centre on Nauru is making millions of dollars from a system that amounts to torture of refugees and people seeking asylum, Amnesty International said today. A new briefing, ‘Treasure I$land’, exposes how Spanish multinational Ferrovial and its Australian subsidiary Broadspectrum are complicit in, and reaping vast profits from, Australia’s cruel and secretive refugee “processing” system on the Pacific island.

“The Australian government has created an island of despair for refugees and people seeking asylum on Nauru, but an island of profit for companies making millions of dollars from a system so deliberately and inherently cruel and abusive it amounts to torture. By knowingly enabling the continuation of this system, which is specifically designed to cause suffering and deter people from travelling to Australia by boat to seek asylum, Broadspectrum and Ferrovial are unequivocally complicit in this abuse,” said Colm O’Gorman, Executive Director of Amnesty International Ireland.

With Broadspectrum’s AUD$2.5 billion contract with the Australian government ending in October, Amnesty International is warning other firms against seeking to profit from torture.

“Any company considering taking up this toxic baton will be complicit in an intentionally abusive system, in direct contravention of its human rights responsibilities, and will be exposing itself to potential criminal liability and damages claims. The regime of cruelty at the Refugee Processing Centre on Nauru leaves a stain that no responsible company would want on its conscience or reputation,” said Colm O’Gorman.

Since 2012, Australia has operated intentionally harsh “offshore processing” systems on the Pacific island of Nauru and the island of Manus in Papua New Guinea. Refugees and asylum seekers are isolated in remote locations and subjected to cruel and degrading conditions, sometimes for years on end, simply because they have sought safety on Australian shores. Amnesty International’s October 2016 report, ‘Island of Despair: Australia’s ‘processing of refugees on Nauru’ found that the Australian government is intentionally and systematically violating the rights of refugees and people seeking asylum on Nauru. It concluded that the conditions on Nauru are so deliberately cruel and abusive that they amount to torture.

“Not only are Ferrovial and Broadspectrum turning a blind eye to the human rights violations perpetrated by the Australian government; they are the very enablers of the abuse. It’s a clinical, cold-blooded set-up where the Australian authorities set the blueprint for cruelty, and the companies do the dirty work. Considering the extraordinary profits on offer, we believe it is clear that these companies are motivated by sheer greed,” said Colm O’Gorman.

The total value of the Australian government’s contract with Broadspectrum is AUD$2.5 billion (US$1.9 billion) over three and a half years. When put into the context of Broadspectrum’s other business sectors, it becomes clear just how profitable this contract is. The profit margin in Broadspectrum’s Defence, Social and Property sector – which includes its Nauru and Manus Island operations – was 17.8% in its 2016 financial year, far higher than in its other business sectors such as Infrastructure (2.8%) and Resource and Industrial (1.6%). Meanwhile, Ferrovial’s revenues in its Nauru and Manus Island-related Service sector increased by 24.1% in 2016 due to its acquisition of Broadspectrum.

While Ferrovial and Broadspectrum turn in huge profits, those trapped on Nauru endure an unimaginably bleak existence with little hope of respite. Not only have they been denied entrance to Australia, they also have no idea when or if Australia and Nauru will allow them to leave, despite a recently announced settlement deal with the USA. Even recognised refugees are not allowed to leave the island. Refugees and asylum seekers at the RPC on Nauru have faced physical attacks and sexual assault by some members of staff, without anyone being held properly accountable.

The briefing highlights the devastating case of “Yasmin” from Iran. Her husband “Amir” told Amnesty International in July 2016 how Yasmin’s mental health started deteriorating during her time at the RPC on Nauru to the point that she tried to commit suicide on several occasions. Not only is Broadspectrum aware of the conditions faced on Nauru by refugees and people seeking asylum; in some cases, its employees and sub-contractors are directly responsible for neglect and abuse.

Allegations of abuses against Broadspectrum, its sub-contractor Wilson Security and other staff members at the RPC have included (as of 30 April 2015) 30 formal allegations of child abuse, 15 allegations of sexual assault or rape and four allegations relating to the exchange of sexual favours for contraband.

“This is business at its worst. Ferrovial acquired Broadspectrum in full knowledge of the extent of the human rights abuses on Nauru and the level of profit that Broadspectrum makes on the back of this immense suffering,” said Colm O’Gorman.

The Australian authorities have stated with pride that they intend for the people detained on Nauru and Manus Island to suffer, in order to deter other would-be asylum-seekers from trying to enter the country irregularly. Despite the apparent candour on the issue, no one is willing to take responsibility for operating the RPC on Nauru.  Broadspectrum told Amnesty International it “does not operate the Refugee Processing Centre”, a claim repeated by Ferrovial. Meanwhile, the Australian government claims the centre is run by the government of Nauru, which has in turn suggested that others are responsible.

In contrast, Amnesty International’s research shows that Broadspectrum runs the RPC on a daily basis and has effective control over the day-to-day lives of refugees and asylum-seekers at the RPC, on behalf of the Australian government and with the government’s ultimate oversight and control. The Australian government has also gone to extraordinary lengths to hide the full magnitude of the abuses on Nauru and Manus Island, making it a criminal offence for welfare professionals to speak out and placing service providers under strict confidentiality clauses.

Meanwhile, Broadspectrum has warned its staff, in a leaked internal document, that they can be fired for communicating information about operations on Nauru. This secrecy extends to the terms of the contracts under which Broadspectrum and Wilson Security provide services on Nauru and Manus Island, the full terms of which are not publicly known.

“The secrecy around the contracts allows Broadspectrum and Ferrovial to hide the exact profit they make from human rights abuses, while the strict confidentiality terms imposed by the Australian government allow it to hide the scale of these abuses,” said Colm O’Gorman.

Australia’s offshore processing system on Nauru could not function without Broadspectrum’s involvement. Ferrovial has stated it will not renew the contract when it expires in October 2017, so the Australian government is expected to issue a call for new service providers soon. Amnesty International is warning others not to take on this contract.

“No company should be operating on Nauru or Manus, where the current situation is so noxious that it would be impossible for any firm to do so without contributing to serious human rights violations and exposing itself to legal liability and reputational risk. It’s therefore our duty to the victims of human rights violations on the islands to name and shame any company that puts profit before decency by choosing to become involved in Australia’s abusive operations,” said Colm O’Gorman.

Amnesty International is calling on the Australian government to shut down the offshore processing system; immediately bring all refugees and asylum seekers on Nauru and Manus Island to Australia; and ensure that all those who were granted refugee status have the right to settle in Australia. It is also urging the Australian government to cooperate with all rights-respecting offers of international cooperation and assistance, including resettlement of refugees to third countries if the refugees wish to be resettled and are able to make a fully informed and free choice. The organisation is calling on Ferrovial to end its operations on Nauru and Manus Island as soon as possible.

A full response from Broadspectrum and Ferrovial to our findings is available in the annex to the report.

Take action now and demand that Ferrovial stops profiting from the abuse of refugees on Nauru: