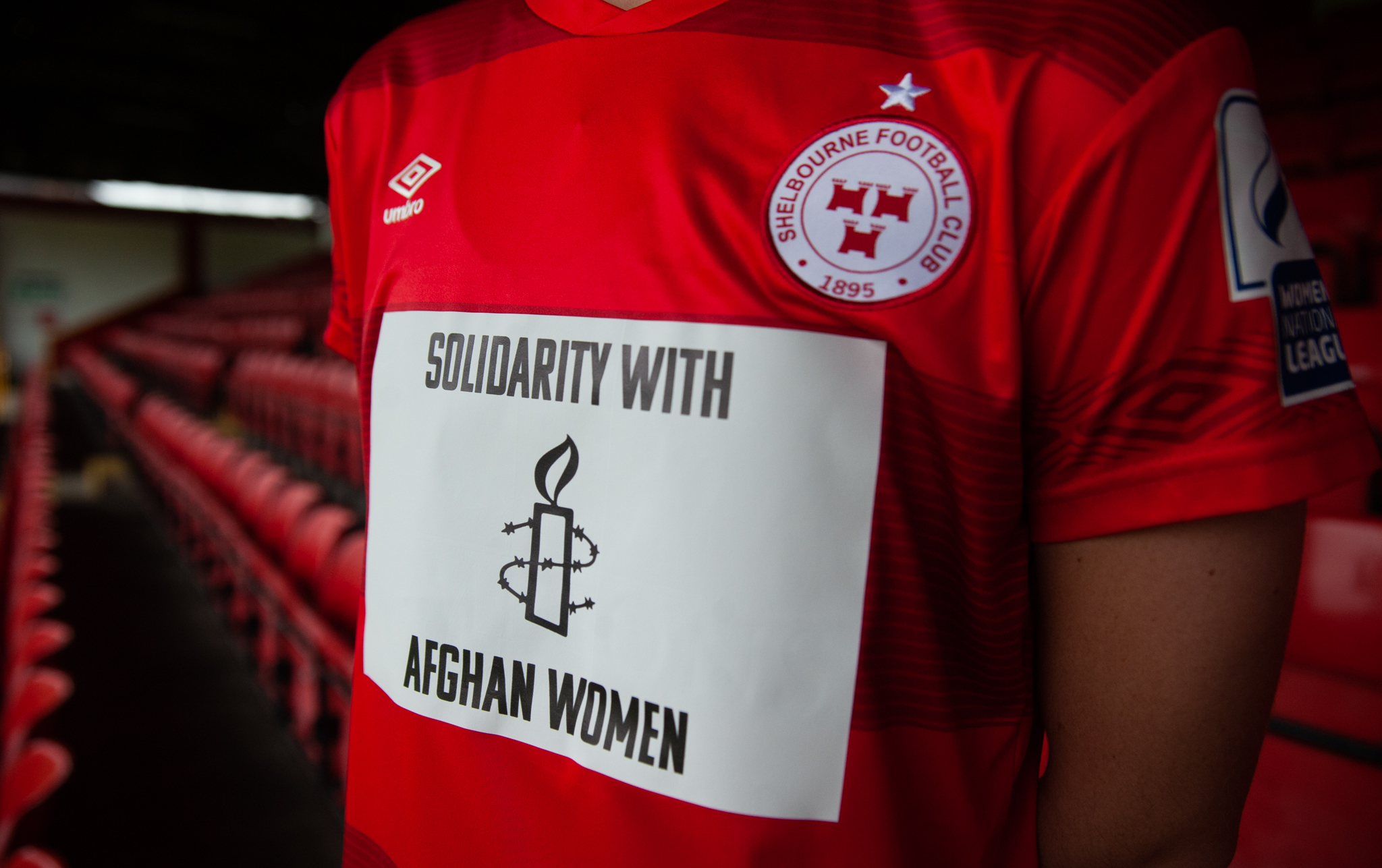 Shelbourne FC and Amnesty team up for Afghan women

Shelbourne FC, in partnership with Amnesty International Ireland, are dedicating their upcoming FAI Women’s Cup quarter final match to the Afghan women’s football team, and all the women and girls of Afghanistan who face an uncertain future.

Many of the Afghan women’s football team have reportedly fled following the Taliban seizure of Kabul. Many sports were banned when the Taliban were last in power, with some sporting grounds infamously becoming places of execution.

Shelbourne FC play Cork City FC Women in the Quarter Final of the EVOKE.ie FAI Women’s Cup this Saturday at 2pm in Tolka Park, Dublin. The Shelbourne team will play the match in jerseys that have temporarily swapped out their main sponsor (Hamptons Homes) logo for the message: “Solidarity with Afghan Women’ alongside the ‘Amnesty candle’.

“There are thousands of people at risk of reprisals in Afghanistan. Women and girls in particular experienced brutal oppression and discrimination under the Taliban during their last period in power, and many women athletes, journalists, activists and so many others have now fled the country in fear for their lives,” said Colm O’Gorman, Executive Director for Amnesty International Ireland.

“The international community has to do everything in its power to ensure people in Afghanistan and those who are trying to leave are protected. Acts of solidarity like this with Shelbourne FC are so important to keep the pressure on and to make sure the people of Afghanistan, and Afghan women in particular, know they will not be forgotten.

“The Taliban have said they have changed. But our recent on-the-ground investigation into the massacre of Hazara men in Ghazni province is proof that the Taliban’s capacity for murder and torture has not diminished. There are countless reports of them going door to door searching for people, and information emerging of abductions and killings.”

Shelbourne FC women’s team decided that they needed to make this public show of solidarity after hearing many of the harrowing stories and reports of fear coming from the Afghan female population. This was compounded by seeing reports that many of Afghan women’s national team have fled the country. As a club with many young female players and senior internationals, they found these reports particularly affecting, and say it is important for young girls in Ireland and for their Youth Academy female players to see this show of solidarity.

“As a team and Club, we felt it was extremely important to show our solidarity for Afghan women who are facing difficult times. Seeing reports that many of the Afghan national team fled in such circumstances really brought their situation home to us. Playing football for your national team is one of our greatest ambitions as players and for the Afghan players to have this threatened in an even remote way is hard to comprehend. We are playing today with them in mind and are there to show we are standing and playing with them,” said Pearl Slattery, Team Captain.

“We wanted to show solidarity with the Afghan women’s football team, who are such an inspiration for building up a team in the face of years of discrimination and threats. We hope they know they are not forgotten and we stand with them,” said David O’Connor, CEO of Shelbourne FC.

“When you are faced with a humanitarian catastrophe like we see in Afghanistan, all of us have to play our part. That’s why we have chosen to make this stand, so young Irish girls and Shelbourne FC Youth Academy female players will see role models in our Women’s National League team making this strong stance of solidarity for women in Afghanistan.”

Background:
Shelbourne FC women’s team plays in the FAI Women’s National League and is home to several Republic of Ireland senior and underage internationals. Shelbourne FC plays their home games in Tolka Park and also have over 100 female youth players in the Shelbourne FC Youth Academy based in North Dublin.

Amnesty International Ireland, as part of 11 other organisations, have launched a campaign to bring at least 1,000 Afghan refugees to Ireland, amongst other calls.

Amnesty International revealed how the Taliban were responsible for a massacre of nine ethnic Hazara men after taking control of Ghazni province in July 2021. The brutal killings likely represent a tiny fraction of the total death toll inflicted by the Taliban following recent territorial gains to date, as the group have cut mobile phone service in many of the areas they have captured, preventing information from emerging