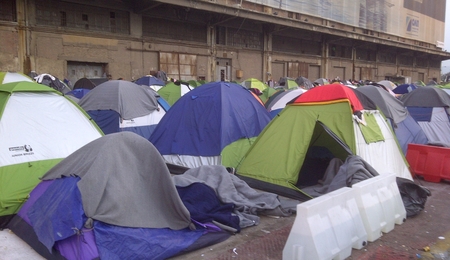 Say No To A Bad Deal With Turkey

Let’s not confuse desperation for legality when it comes to Europe’s proposed refugee deal with Turkey. No one should be under any illusion – the very principle of international protection for those fleeing war and persecution is at stake.

Every government in Europe will have to declare its hand this week: does it uphold the right to seek asylum, or does it subordinate that right to horse trading with a country that has an inadequate record of respecting it.

This new proposal is only the latest in a dangerous trend.  Over the past few months, various European governments have imposed discriminatory border closures and unlawful caps on asylum applications. The result is a deepening humanitarian disaster for thousands of refugees trapped in Greece, a surge in alarmist, vitriolic rhetoric stigmatizing asylum seekers and migrants.

EU leaders hit a new low last week by proposing that Turkey accept fast-track mass returns of boat migrants from Greece and a plan to resettle one Syrian refugee from Turkey for each irregularly arriving Syrian returned from Greece in exchange for €6 billion, promises of visa-free travel for Turkish nationals, and revival of EU accession talks.

We favour large-scale resettlement of refugees to Europe and elsewhere as the best way to remove the need for desperate refugees to take the dangerous step of boarding rickety boats across the Mediterranean and act in concrete solidarity with those countries hosting the vast majority of the world’s refugees, including Turkey. But EU leaders should reject any linkage of resettlement for some refugees to the blocking of access to a fair asylum procedure for other refugees.

While insisting on the right of those who arrive irregularly on Europe’s shores to a full and fair hearing of any asylum claim, we recognize that those who fail after a fair process to demonstrate a legitimate case to stay can be returned. Our objection is to fast-track collective expulsions that fail to take individual circumstances into account.

The breach of the right to seek asylum is not mitigated by the fiction that Turkey is a “safe” country for refugees. Turkey has granted “temporary protection” to more than two million Syrians, but it still refuses effective protection in practice to non-Europeans including Afghans, Iraqis and others applying for it. Turkey has also repeatedly pushed Syrians back into the war zone and closed borders to others seeking to flee.

Meanwhile, all refugees in Turkey are struggling to find work, educate their children, and build dignified lives—essential elements of a “safe” refuge.

To make matters worse, Turkey’s president and government have embarked on an intense crackdown on human rights. The breakdown of the Kurdish peace process and extended security operations in the south east, along with nationwide repression of critics, political opposition and media perceived as hostile to the government, may soon add Turkish nationals to the refugee flows.

In their determination to sidestep their responsibilities in the face of the biggest global refugee crisis since World War II, EU leaders have been mute in their response to these trends in the misguided hope of securing Turkey’s co-operation in stopping the boats.

The best way to fight the demagogues in Europe who are currently profiting from the chaos in the Aegean is not to indulge their disregard for international law, but to offer sustainable, principled solutions. These exist. The flow of boats can be substantially eased by expanding resettlement directly from countries of first refuge to reduce the need to board a boat, investing in those countries so refugees can lead a dignified life there, and redoubling efforts to stop the atrocities in places like Syria that drive the refugees to flee in the first place.