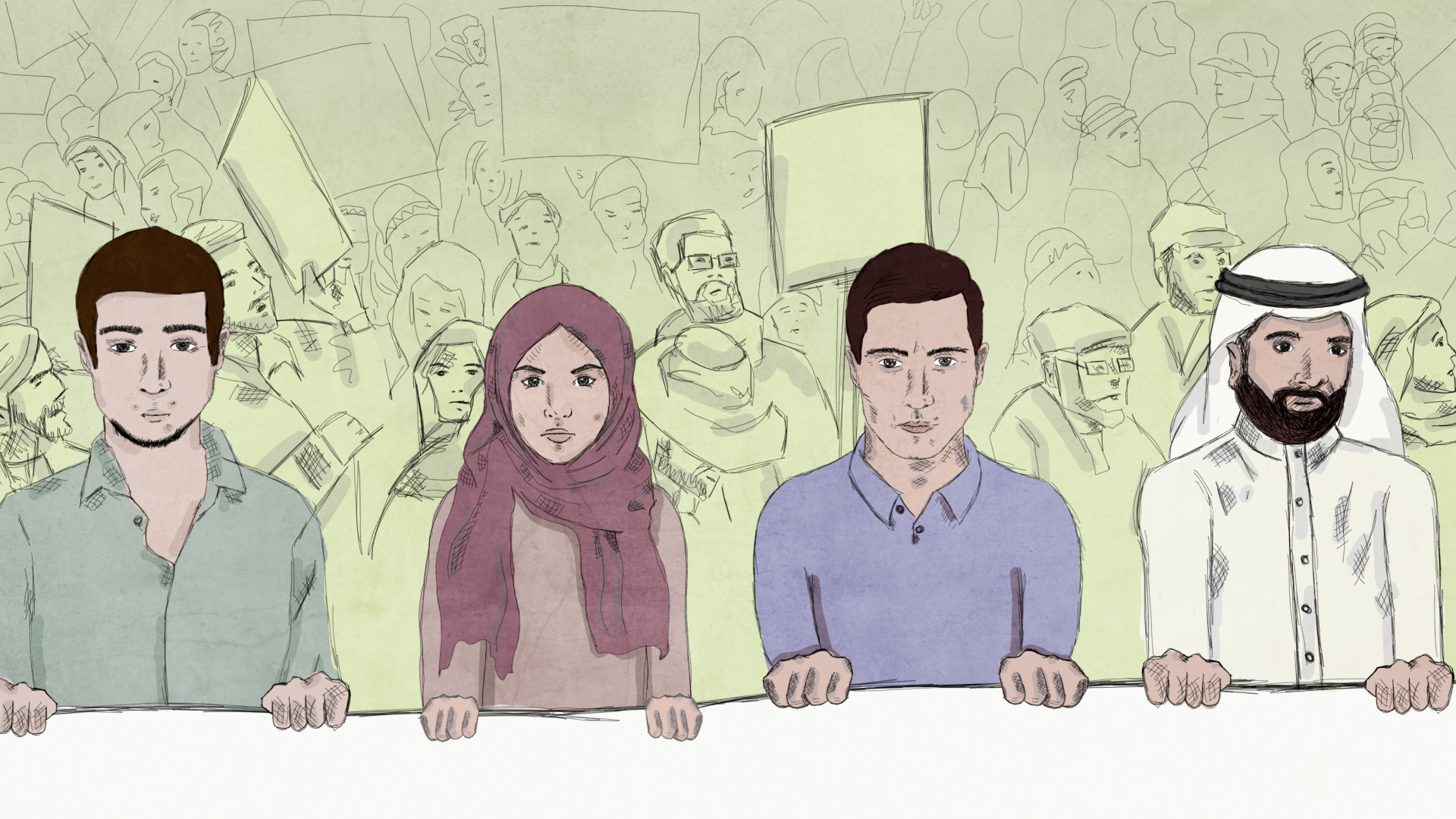 A new report published by Amnesty International today exposes how despite all their rhetoric of reforms, the Saudi authorities are using the Specialized Criminal Court (SCC) as a weapon to systematically silence dissent. Alongside the report, the organisation is also launching a campaign calling for the immediate and unconditional release of all human rights defenders detained for their peaceful expression.

Extensive examination of court documents, government statements and national legislation, as well as interviews with activists, lawyers and individuals close to the cases documented were included in the report. Amnesty International wrote to the Saudi authorities on 12 December 2019 and received one response from the official Human Rights Commission summarising relevant laws and procedures but failing to directly address the cases raised in the report.

“The Saudi Arabian government exploits the SCC to create a false aura of legality around its abuse of the counter-terror law to silence its critics. Every stage of the SCC’s judicial process is tainted with human rights abuses, from the denial of access to a lawyer, to incommunicado detention, to convictions based solely on so-called ‘confessions’ extracted through torture,” said Heba Morayef, Amnesty International’s Middle East and North Africa Regional Director.

“Our research gives lie to the shiny new reformist image Saudi Arabia is trying to cultivate, exposing how the government uses a court like the SCC in the ruthless suppression of those who are courageous enough to voice opposition, defend human rights or call for meaningful reforms.”

The government’s rhetoric about reforms, which increased after the appointment of Crown Prince Mohammed bin Salman, stands in stark contrast to the reality of the human rights situation in the country. At the same time as they brought in a set of positive women’s rights reforms, the authorities unleashed an intense crackdown on some of the highest profile women human rights defenders who had for years fought for those reforms as well as other citizens promoting change.

The SCC was established in October 2008 to try individuals accused of terror-related crimes. Since 2011, it has been systematically used to prosecute individuals on vague charges which often equate peaceful political activities with terrorism-related crimes. The counter-terror law, which has overly broad and vague definitions of “terrorism” and of a “terrorist crime”, contains provisions which criminalise peaceful expression of views.

Amnesty International’s report documents the cases of 95 individuals, mostly men, who were tried, sentenced or remain on trial before the SCC between 2011 and 2019. The trials of at least 11 individuals detained for their peaceful expression and association continue before the SCC until this day. Some 52 are now serving lengthy prison sentences of between five and 30 years.

Several Saudi Arabian Shi’a Muslims, including young men tried for “crimes” they were accused of having committed when they were under the age of 18 are at imminent risk of execution following grossly unfair trials before the SCC. At least 28 Saudi Arabians from the Shi’a minority have been executed since 2016, many of whom were sentenced to death by the SCC based solely on torture-tainted ‘confessions.’

Amnesty International closely reviewed eight SCC trials of 68 Shi’a defendants, the majority of whom were prosecuted for their participation in anti-government protests, and of 27 individuals prosecuted for their peaceful expression and human rights activism. In all cases of the 95 individuals, the organisation concluded that the trials were grossly unfair. Defendants were convicted and, in many cases sentenced to death, on vague charges that criminalise peaceful opposition or in relation to charges of violence.

The most common charges used in proceedings analyzed by Amnesty International include “disobeying the ruler”; “questioning the integrity of officials and the judicial system”; “inciting disorder by calling for demonstrations” and “forming an unlicensed organisation” – all of which describe acts protected by the right to freedom of expression, assembly and association.

Every single defendant in the SCC trials reviewed by Amnesty International was denied access to a lawyer from their arrest and throughout their interrogation. Appeals against SCC judgements are conducted behind closed doors without the presence or participation of defendants or their lawyers.

One of the most striking failings of the SCC in the trials reviewed by Amnesty International is its unquestioning reliance on torture-tainted “confessions”. At least 20 Shi’a men tried by the SCC have been sentenced to death on the basis of such “confessions,” with 17 of them already executed.

Virtually all Saudi Arabian independent voices, including human rights defenders, writers and religious clerics are behind bars serving lengthy sentences handed down by the SCC and other courts since 2011 or remain on trial on charges related to their peaceful expression or activism.

Among those prosecuted by the SCC are founding members of independent human rights groups that the authorities shut down in 2013. For example, all 11 founding members of the Saudi Civil and Political Rights Association (ACPRA) have been tried and sentenced in recent years for their human rights work. Others include human rights defenders such as Mohammad al-Otaibi, a founding member of the Union for Human Rights, who was sentenced to 14 years in prison on charges related to his efforts to form an independent human rights organisation. He is currently facing new charges for his communication with international organisations and his attempt to seek political asylum.

Others who remain on trial before the SCC include Salman al-Awda, a reformist religious cleric arrested in September 2017, who faces the death penalty for peacefully exercising his rights to freedom expression and of association. Amnesty International has documented the trials and sentencing of 27 such individuals by the SCC. It considers 22 of the 27 still unlawfully detained to be prisoners of conscience and calls for their immediate and unconditional release.

Crushing dissent in the Eastern Province

Since 2011, over 100 Saudi Arabian Shi’a Muslims have been brought before the SCC in relation to both peaceful criticism of the government in speeches or on social media and participation in anti-government protests. They have been tried on vague and varied charges ranging from organisation or support for protests, to alleged involvement in violent attacks and espionage for Iran.

On 2 January 2016, the authorities announced that a Shi’a cleric, Nimr al-Nimr, known for his critical stance towards the government had been executed, sparking renewed protests in Eastern Province. In July 2017, Youssuf al-Muhsikhass, who was sentenced to death following a grossly unfair trial was executed with three other Shi’a men, and in April 2019 a mass execution of 37 men, the majority of them Shi’a, was carried out.

The SCC has also sentenced to death and executed several young men for crimes committed when they were below 18 years of age following “confessions” extracted through torture or coercion. Three juveniles – Ali al-Nimr, Abdullah al-Zaher and Dawood al-Marhoon – were arrested separately in 2012 aged 17, 16 and 17 respectively in relation to their participation in anti-government protests. The three are at imminent risk of execution after they were sentenced to death following grossly unfair trials before the SCC.

Amnesty International calls for the immediate and unconditional release of all prisoners of conscience as well as fundamental reform to the SCC to ensure it can conduct fair trials and protect defendants from arbitrary detention, torture and other ill-treatment. There must also be independent investigations into allegations of torture or other ill-treatment in custody and full reparation for all victims of torture and other human rights violations by state officials or those acting on their behalf.

“If the King and Crown Prince want to show they are serious about reforms, they should as a first step immediately and unconditionally release all prisoners of conscience, ensure their convictions and sentences are quashed, and declare an official moratorium on all executions with a view to abolishing the death penalty,” said Heba Morayef.

In March and September 2019, the UN Human Rights Council adopted unprecedented joint statements on Saudi Arabia setting out a number of benchmarks for urgent human rights reforms. None of these have been met and Council members must ensure sustained scrutiny at the Council by supporting the establishment of a monitoring and reporting mechanism over the human rights situation.