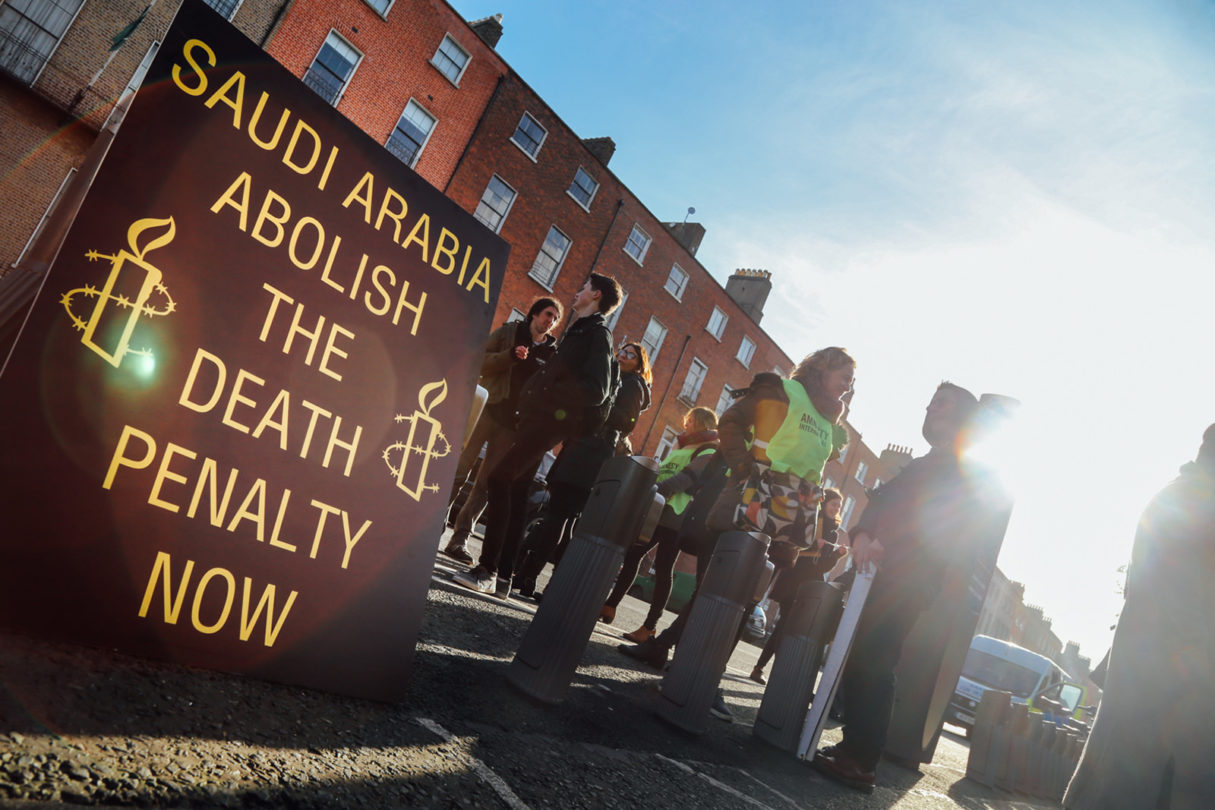 Responding to news that Saudi Arabia is seeking the death penalty for five individuals who face trial before Saudi Arabia’s counter-terror court, including Israa al-Ghomgham, who would be the first woman ever to face the death penalty simply for participating in protests, Colm O’Gorman, Executive Director of Amnesty International Ireland, said:

“Israa al-Ghomgam and four other individuals are now facing the most appalling possible punishment simply for their involvement in anti-government protests. We are urging the Saudi Arabian authorities to drop these plans immediately.

“Sentencing Israa al-Ghomgam to death would send a horrifying message that other activists could be targeted in the same way for their peaceful protest and human rights activism. The charges against Israa al-Ghomgam, which mostly relate to her peaceful participation in protests, are absurd and clearly politically motivated to silence dissent in the Eastern Province of Saudi Arabia.

“Saudi Arabia is one of the world’s most prolific executioners and the world cannot continue to ignore the country’s horrific human rights record. We call on the international community to put pressure on the Saudi Arabian authorities to end the use of the death penalty, which continues to be employed in violation of international human rights law and standards, often after grossly unfair and politically motivated trials.”

Israa al-Ghomgham and other individuals are currently detained in al-Mabahith prison in Dammam, Eastern Province of Saudi Arabia.

Israa al-Ghomgham, 29, was arrested along with her husband Moussa al-Hashem in December 2015, for their roles in participating in anti-government protests in the eastern Qatif province in the aftermath of the Arab Spring.

The Saudi public prosecutor called for Israa al-Ghomgham and five other defendants to be beheaded.

According to court documents obtained by Amnesty International, Israa has been charged with:

• Violating Royal Decree 44/A for “Participating in protests in al-Qatif and documenting these protests on social media”.
• “Providing moral support to rioters by participating in funerals of protesters killed during clashes with security forces”
• “Committing forgery by using the passport photo of another woman on her Facebook account”
• “Violating Article 6 of the Anti-Cyber Crime law” through, among other things, advocating for protests and posting photos and videos of protests on Facebook.

According to the information available to Amnesty International, the Royal Decree 44/A of February 2014, one of the follow-up decrees to the counter-terrorism law, was first invoked in the trial of human rights defenders in February 2018.

Amnesty International has documented the cases of at least 33 other Shi’a men currently sentenced to death. All were accused of activities deemed a risk to national security and handed death sentences by the Specialized Criminal Court, a notorious counter-terror tribunal. Among those currently on death row are four Saudi Arabian nationals who were convicted of offences committed while teenagers.

Amnesty International opposes the death penalty in all cases without exception regardless of the nature of the crime, the characteristics of the offender, or the method used by the state to kill the prisoner. The death penalty is a violation of the right to life and the ultimate cruel, inhuman and degrading punishment.