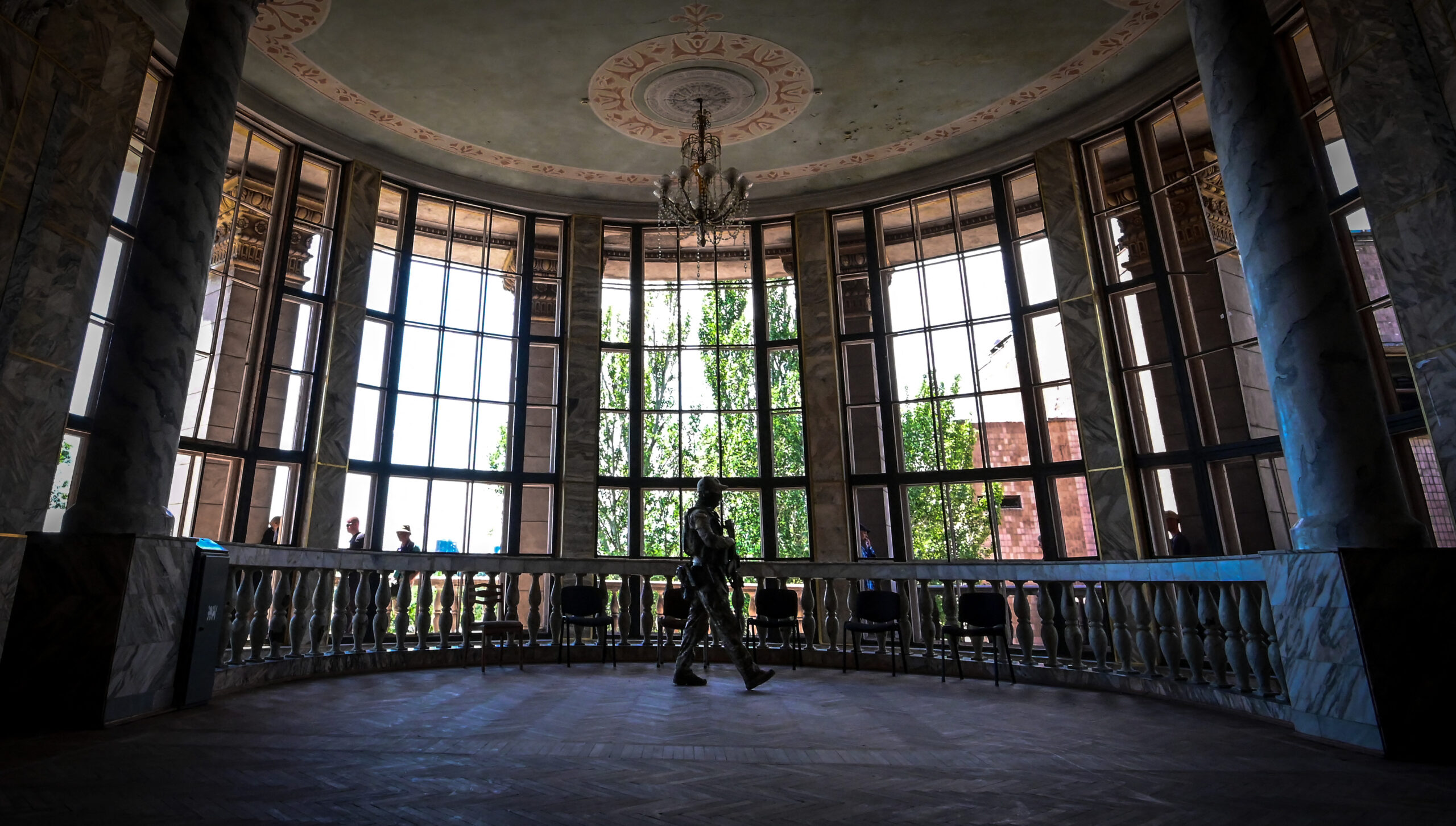 Ukraine: Russian sham trials of prisoners of war in Mariupol ‘illegal and unacceptable’

Any moves by Russian-backed armed groups to try Ukrainian prisoners of war in a so-called ‘international tribunal’ in Mariupol are illegal and abusive, and a further act of cruelty against a city that has already suffered extensively under Russia’s war of aggression against Ukraine, Amnesty International said today.

In recent days, concerns have mounted after several reports and pictures shared on social media appear to show cages being built inside the Mariupol Philharmonic Hall to allegedly restrain prisoners who will be put on trial. Amnesty International’s Crisis Evidence Lab confirmed that pictures posted on Facebook by Mariupol City Council were consistent with the interior of the Mariupol Philharmonic Hall.

International law prohibits a detaining power from prosecuting prisoners of war for having participated in hostilities, or for lawful acts of war committed in the course of armed conflict. Under the Third Geneva Convention, prisoners of war charged with crimes are entitled to due process and a fair trial, which can only take place in a regularly constituted court.

“Any attempts by Russian authorities to try Ukrainian prisoners of war in so-called ‘international tribunals’ set up by armed groups under Russia’s effective control in Mariupol are illegal and unacceptable,” said Marie Struthers, Amnesty International’s Director for Eastern Europe and Central Asia.

“International humanitarian law prohibits courts being set up solely to try prisoners of war. Wilfully stripping fair trial rights from prisoners of war, which is precisely what Russia’s action will do, amounts to a war crime. The Geneva Conventions also state clearly that prisoners of war are protected from prosecution for taking part in hostilities.

“By staging such sham ‘trials’, Russia – as the occupying power – is making a mockery of justice and a public theatre of courts, transforming them into vehicles for propaganda.

“To choose Mariupol as host of these ‘tribunals’ is particularly cruel and shocking, given Russia’s recent relentless attacks and siege which turned the city into a wasteland before its capture in May. Amnesty International investigated a Russian air strike on the Donetsk Regional Academic Drama Theatre in Mariupol and concluded that Russian forces had deliberately targeted civilians, an attack amounting to a clear war crime.”

Russian forces and Russian-backed armed groups must give independent monitors full access to Ukrainian prisoners of war. Amnesty International shares concerns raised by the UN’s human rights agency (OHCHR) that Ukrainian prisoners of war have been held without access to independent monitors, “exposing them to the risk of being tortured to extract a confession.”

In recent years, Amnesty International has consistently documented the violation of the right to a fair trial in Russia, including endemic use of torture, fabrication of evidence, and politically-motivated prosecutions. These concerns are substantially increased when it comes to ‘trials’ by armed groups in Russian-occupied territories.

Amnesty International has also previously documented numerous human rights abuses by such groups since they took control over parts of eastern Ukraine under Russian patronage, including abductions, killings, unlawful deprivation of liberty, torture and other ill-treatment, and suppression of dissent.

Amnesty International is also calling for an immediate international investigation into other alleged war crimes, including the 29 July explosion in Olenivka village that killed more than 50 Ukrainian prisoners of war held by forces of the so-called ‘Donetsk People’s Republic’ in eastern Ukraine. It is imperative that Russian authorities allow international investigators to visit the site to launch a comprehensive probe.

Protections for prisoners of war facing criminal proceedings are contained in Articles 82 to 108 of the Third Geneva Convention (GCIII). As Article 84 provides, they may only be tried by courts that offer “the essential guarantees of independence and impartiality as generally recognized”.

Amnesty International has called repeatedly for Russian forces responsible for violations to be held to account and has welcomed the ongoing International Criminal Court investigation in Ukraine. Comprehensive accountability in Ukraine will require the concerted efforts of the UN and its organs, as well as initiatives at the national level pursuant to the principle of universal jurisdiction.