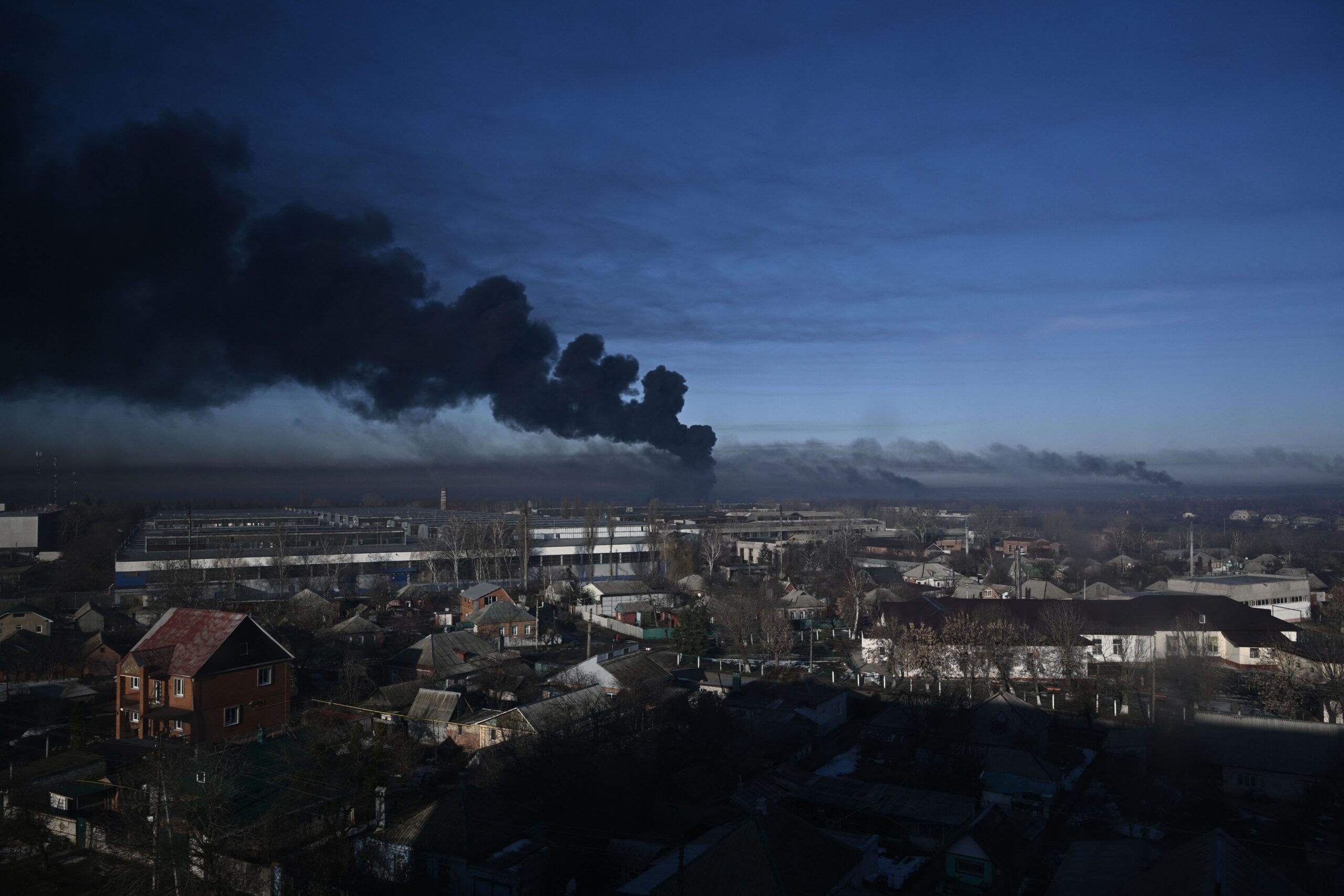 A preschool in north-eastern Ukraine was hit on the morning of 25 February with widely-banned cluster munitions while civilians took shelter inside, killing three of them, including a child, and wounding another child, Amnesty International said today. The attack appears to have been carried out by Russian forces, which were operating nearby, and which have a shameful record of using cluster munitions in populated areas.

Amnesty International has confirmed that a 220mm Uragan rocket dropped cluster munitions on the Sonechko nursery and kindergarten in the town of Okhtyrka in Sumy Oblast, where local people were seeking safety from the fighting. The strike may constitute a war crime.

“There is no possible justification for dropping cluster munitions in populated areas, let alone near a school,” said Agnès Callamard, Secretary-General of Amnesty International. “This attack bears all the hallmarks of Russia’s use of this inherently indiscriminate and internationally-banned weapon, and shows flagrant disregard for civilian life.”

The strike violates the prohibition on indiscriminate attacks and damaged a school, a structure legally entitled to special protection. Under the 2008 Convention on Cluster Munitions — a treaty backed by more than 100 states, but which Ukraine and Russia have not joined — the use, development, production, acquisition, stockpiling and transfer of cluster munitions is prohibited under all circumstances. Customary international humanitarian law prohibits the use of inherently indiscriminate weapons such as cluster munitions. Launching indiscriminate attacks that kill or injure civilians constitutes a war crime.

Drone video footage taken from the scene shows that cluster munitions struck at least seven locations on or near the building, four on the roof and three on the pavement immediately outside the school. Two injured or dead civilians are also visible in the footage, as are pools of blood. An additional 65 photos and videos that Amnesty International acquired from a local source shows more details of the scene, the victims and their family members, and the damage to the school.

“While I was walking down [with] my wife, there were immediate explosions,” an older man told a contact working with Amnesty International. “You see, everyone is covered with blood, everything. Look at it…[expletive], it kills me the fact it’s a kindergarten. What’s this they shoot at? At military objects? Where are those?”

The 220mm Uragan rocket, either a 9M27K or 9M27K1, carries 30 9N210 or 9N235 cluster munitions, which are nearly identical and differ only in the length of the time delay of their self-destruct feature. The seven impacts on and near the school show damage, including distinctive spalling on the ground, consistent with the expected damage from 9N210/9N235 cluster munitions.

As first reported by the open source investigation organization Bellingcat, the remains of the nose cone and cargo compartment of the 9M27K rocket were discovered 200 metres to the east. Open source reports indicate there were Russian forces to the west of Okhtyrka, the source of the rocket launch based upon the flight trajectory, at the time of the attack. A logistics storage yard 300 metres north of the school may have been the target of the attack. However, Multiple Launch Rocket Systems (MLRS), like the 220mm Uragan rockets used in this attack, are unguided and notoriously inaccurate, and should never be used in civilian populated areas.

In addition, because they scatter munitions over a wide area and have an extremely high dud rate of up to 20% — and because of the consequent threat they pose to civilians — cluster munitions are inherently indiscriminate weapons that are internationally banned by a treaty backed by more than 100 states. The use of these weapons violates the prohibition on indiscriminate attacks.

This is the fourth attack in this conflict that has struck a school that Amnesty International has verified.

On 17 February, during increased shelling along the line of control, Russian-backed forces struck a kindergarten in the town of Stanytsia Luhanska, wounding three civilians. On the evening of 25 February, a missile damaged School No. 48 in Mariupol, blowing in windows and pockmarking the walls with metal fragments. And, on 26 February, an explosive weapon, most likely an artillery shell, hit the second story of a kindergarten in Chernihiv, starting a fire that was likely detected by VIIRS environmental satellite sensors.

Under international humanitarian law, educational facilities are entitled to heightened protections as long as they are not used for military purposes. (None of the schools damaged in the incidents documented by Amnesty International appear to have been used for military purposes.) Parties to a conflict are required to take special care to avoid destroying or damaging them, a requirement that Russian forces do not appear to be meeting, judging from the growing number of attacks.

In 2019, Ukraine endorsed the Safe Schools Declaration, which includes commitments to strengthen the protection of schools during armed conflict and to restrict their use for military purposes. All parties to the current conflict should respect the Safe Schools Declaration and its Guidelines.
“It is stomach turning to see an indiscriminate attack on a nursery and kindergarten where civilians are seeking safe-haven. Plain and simple, this should be investigated as a war crime,” said Agnès Callamard.

“As this human tragedy unfolds in Ukraine, any person who commits war crimes should be held individually accountable before the International Criminal Court (ICC) or another international criminal justice process at the national or international level. It is imperative that UN member states and the ICC urgently consider how to ensure the timely and effective collection and preservation of evidence of any crimes under international law committed in Ukraine.”

While Russia and Ukraine are not parties to the ICC, in 2015 Ukraine accepted the court’s jurisdiction over alleged crimes committed on its territory from 20 February 2014.