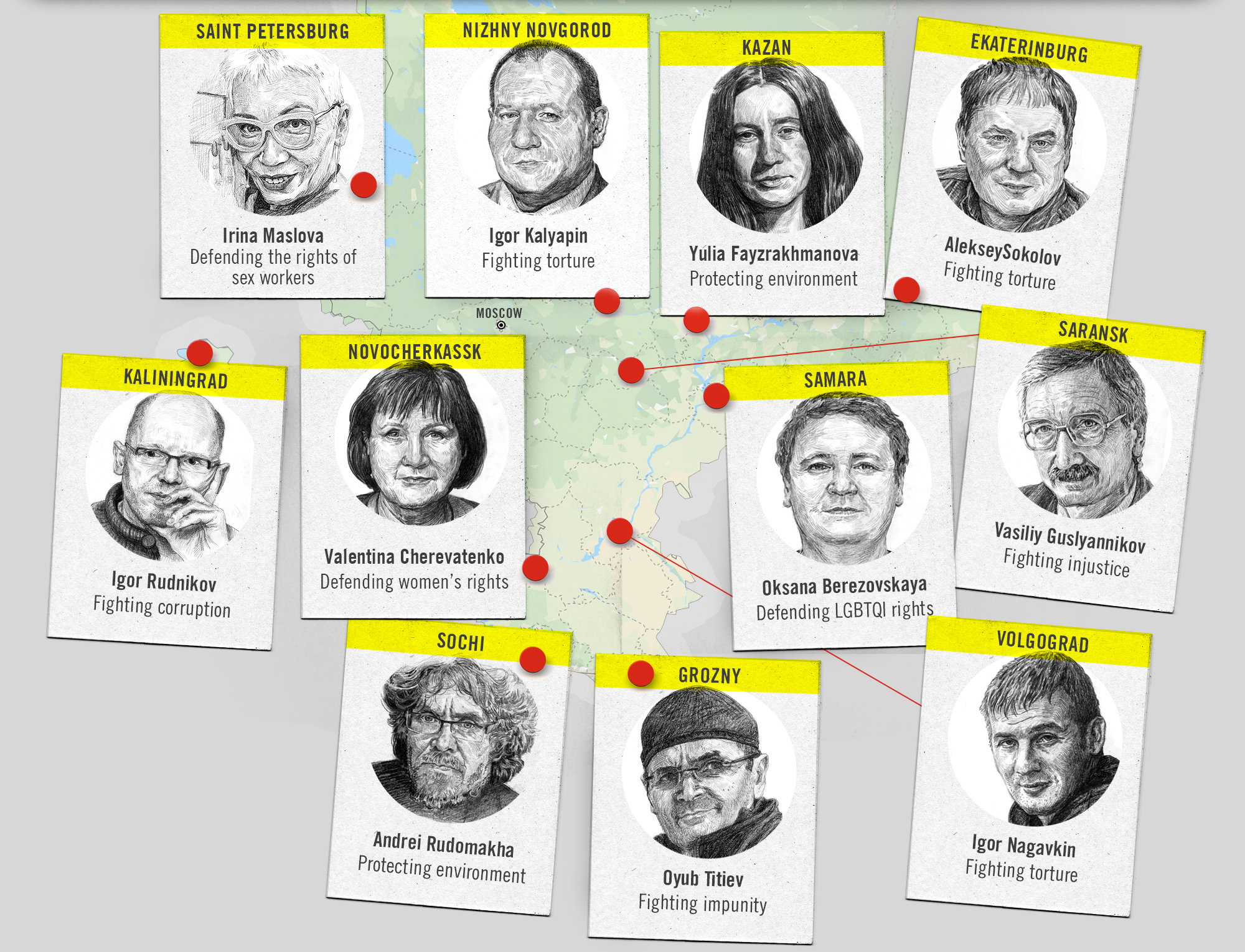 As Russia prepares for the opening game of the FIFA World Cup 2018, Amnesty International is shining a spotlight on 11 Russian human rights champions who routinely put their lives on the line to defend human rights in Russia; calling them the ‘33rd Team of the World Cup’.

A new campaign, Team Brave, will profile a human rights defender from each of the 11 regions hosting World Cup matches to raise awareness of their important work, and Amnesty International supporters from around the world will send messages of solidarity to show these brave individuals that they are not alone.

“As World Cup excitement builds, we want to highlight the work of the inspiring men and women who risk their lives and freedom to fight for human rights in Russia. The lineup of Team Brave includes activists who have fought to end torture in police stations, protect the environment, defend LGBTI rights and sex workers’ rights, and support victims of domestic violence – they are the real champions in Russia,” said Inga Kelekhsaeva, Russia Campaigner at Amnesty International.

“Throughout the World Cup, Amnesty International supporters from all over the world will be cheering on these brave human rights defenders and demanding an end to the constant harassment and intimidation by the Russian authorities. The Russian authorities cannot continue to intimidate and harass every critic into silence. With the eyes of the world on Russia, they must decide what they want the legacy of this World Cup to be.”

Team Brave will have an immediate focus on 3 of the human rights defenders, who remain in prison or whose assailants remain at large. They are:

Oyub Titiev who has been detained for almost six months on fabricated charges because of his human rights work. Environmental human rights defender Andrei Rudomakha who was brutally assaulted in 2017 by unknown assailants for documenting illegal construction work on the Black Sea coast, and his attackers still walk free. Igor Nagavkin who has spent more than a year and a half in pre-trial detention on trumped-up charges for his work defending prisoners’ rights and combatting torture and corruption.

Supporters can take action by joining Team Brave as well as by looking out for the hashtag #TeamBrave on social media.

“We are calling for the Russian authorities to immediately and unconditionally release Oyub Titiev and Igor Nagavkin, and conducting a prompt, thorough and effective investigation into the brutal assault on Andrei Rudomakha. The World Cup brings people together from all over the world, and we want to harness some of this energy to fight for freedom and justice for these courageous human rights defenders,” said Inga Kelekhsaeva.

Full list of Human Rights defenders, being featured on www.amnesty.ie throughout the World Cup:

• Oyub Titiev, the head of the NGO Memorial’s office in Chechnya imprisoned under bogus charges since January 2018 – from Grozny region.
• Andrei Rudomakha, an environmental human rights defender who was brutally attacked in 2017 – from Sochi region.
• Igor Nagavkin, who worked on fighting torture and corruption until he was arbitrarily detained in October 2016 – from Volgograd region.
• Irina Maslova, who founded a movement to defend the rights of sex workers – from St Petersburg region.
• Valentina Cherevatenko, a women’s rights activist– from Rostov-on-Don.
• Igor Rudnikov, an independent journalist investigating cases of corruption until his arbitrary detention in 2017 – from Kaliningrad region.
• Oksana Berezovskaya, who runs an LGBTI rights organization – from Samara region.
• Igor Kalyapin, who founded the Committee Against Torture – from Nizhny Novgorod region.
• Yulia Fayzrakhmanova, an environmental human rights defender – from Kazan región.
• Aleksei Sokolov, who fights torture and other abuses in the prison system – from Yekaterinburg region.
• Vasiliy Guslyannikov, the founder of the NGO Mordovian Republic Human Rights Centre – from Saransk region.