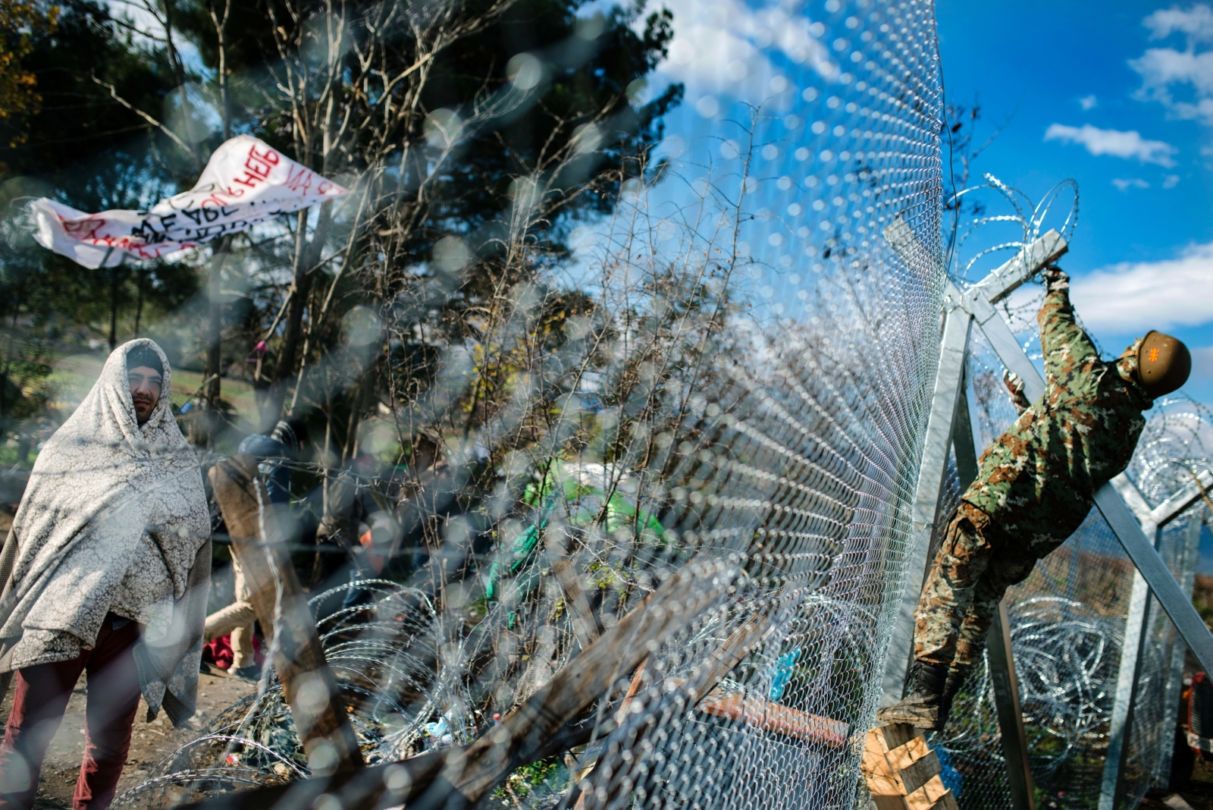 New discriminatory border policy is leaving thousands of refugees in limbo and at mercy of smugglers. Just inside the fence, his body tightly curled up, a young man is crying. His hands over his face, he sobs as if he will never stop.

He and his mother have just been found by the Macedonian border police, and brought into the registration centre at Gevgelija. She needs help to stand; exhausted, hungry and disoriented, she says they came from Greece, lost their way and had been walking for three days. They are in shock, and unaware that – as Iranians – their efforts will have been in vain. They will be soon be sent back to Greece: Iranian refugees are no longer permitted to enter Macedonia.

On 18 November, Macedonia, along with Serbia, Croatia and Slovenia, introduced a discriminatory border policy, only allowing Syrian, Iraqi and Afghan refugees to enter. Since then, the Macedonian authorities have pushed back thousands of refugees and migrants to Greece, ignoring any claim they may have to asylum.

In early December, Amnesty International returned to the border to monitor this policy in practice. Refugees and migrants cannot believe what is happening. They have travelled so far, only to be blocked.

Although the UN Refugee Agency, UNHCR, told us they try to inform them, most of the “prohibited” refugees and migrants arriving on the bus from further south in Greece do not yet know that they are now considered the “wrong” nationality. Unless they are Syrian, Iraqi or Afghan, they are turned away when they present their documents to Macedonian police at the border. Most are in shock; some are in tears.

Apart from being a flagrantly discriminatory practice, it does not even work all the time. The Habib family from Halab, [Aleppo], and their cousins from Yarmouk are supposed to be allowed through.

Ten days ago, they fled Syria through Turkey, and then took a boat to the Greek island of Chios. There, the Greek police documented them as Palestinians, rather than registered Palestine refugees living in Syria. Since the Habibs were unable to read the documents, they could not have known.

The border police turn them away. They walk slowly back from the gate, in disbelief. They show us their documents, stored on smart phones, attesting to their status. We take them to UNHCR, who sometimes help Palestinian Syrians enter Macedonia. But this time, the Habib family are advised to return to Athens and get their papers changed there. They are among many Palestinian Syrians who are turned back each week.

Refugees who are allowed to cross the border are taken to the Crisis Centre at Gevgelija, where they are registered to travel through Macedonia. But in only two hours of monitoring this process, we saw another 50 people being returned from Gevgelija and pushed back into Greece.

The border guards at the gate possibly did not notice their nationality, and maybe their papers are forged – but most are in despair at being returned. An Iranian family – a mother, father and four children, wearing neat rucksacks – walk, as if in a dream, through the gate. A few minutes later, 12 men and a family with three children are roughly pushed out of a military truck.

As they pass the gate, it is clear from their rueful expressions that a few have tried to cross before. But for “M” from Libya, it is the first time. He is frightened: “I said I was from Libya, I told them there is a war in my country and I want to claim asylum, but they told me to go. No one told me about this.”

At the Idomeni camp, back on the Greek side, people wait in the hope that the border will open for them. An Iranian Christian pulls up his sleeve and shows the cross elaborately tattooed on his inner wrist. He tells us that he fled after the authorities raided the homes where he and others worshipped. “You can see on the internet what the UN says about religious belief in Iran, but now they say we are coming here for jobs.” An Iranian woman tells us her husband is in prison at home, and she cannot find a lawyer to get him out. Another Iranian man says he left after being arrested and questioned – and beaten – by the police.

A former teacher adds: “There is no secularism, no liberalism. I don’t even have the freedom to hold hands with my girlfriend. All the EU countries criticize Iran, but when we come here, it is our problem.”

There is no secularism, no liberalism. I don’t even have the freedom to hold hands with my girlfriend. All the EU countries criticize Iran, but when we come here, it is our problem

Some try to find another way to enter Macedonia. Two men from North Africa tell us: “Ten of us decided to cross the border. We left the camp around 5am and walked for about five hours. Then we crossed the fence. After five minutes, we heard shots. We went down on the ground. We were really scared, as we thought the Macedonians were going kill us. They got five of our group: we saw them kick them and hit them, and then they took them away in military cars. They didn’t see us, so we walked back here.”

On December 9, Greek police cleared the Idomeni camp, bussing everyone back to Athens.  But most migrants and refugees with the “wrong” nationality will not give up their journey.  By the following day, many had again left Athens, intending to irregularly cross into Macedonia. Many will succeed but others will again be pushed back, often with violence, by the Macedonian police.

Many of the people we interviewed seem to be stuck in limbo. We heard about the Habib family and “M” from Libya after they were bussed back to Athens; none of them has received the assistance they were promised.

While every country has control over its borders, under international law it is illegal to reject refugees and asylum seekers based on their nationality and without any possibility of having their individual circumstances taken into account. European Commissioner Dimitris Avramopoulos recently drove that point home at the EU-Western Balkans Ministerial Forum in Sarajevo.

The Western Balkans route is no longer safe, and this border lockdown is exacerbating the situation. If the EU does not encourage Macedonia and the other Balkans states to end their discriminatory policy, many of the thousands of refugees arriving daily from the Greek islands will have no choice except to take the dangerous, illegal and expensive route provided by smugglers.