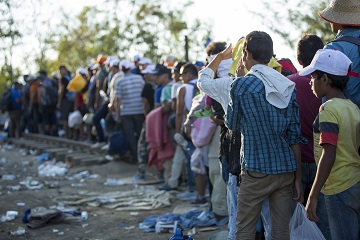 The outcome of President Obama’s Leaders’ Summit on Refugees in New York marks a small step forward but falls far short of what is needed to address the global refugee crisis, said Amnesty International today.

Leaders at the summit increased commitments on resettlement, humanitarian funding, refugee education and access to work. The pledges – which pale in comparison to what is needed – come after the UN Summit for Refugees and Migrants ended in abject failure earlier this week.

“This week’s summits only served to expose the leadership crisis. With few exceptions, many world leaders failed to rise to the occasion, making commitments that still leave millions of refugees staring into the abyss,” said Salil Shetty, Secretary General of Amnesty International.

“Wealthy countries cannot only commit money and walk away. The 360,000 resettlement places offered globally need to be seen in the context of more than 20 million refugees worldwide, with half of them in just 10 countries. And those countries that are amongst the world’s worst abusers of refugee rights, such as Australia and EU states, cannot be allowed to tout small offers of help as a generous response to the crisis.”

States attending the summit committed to increase funding by US$4.5 billion over 2015 levels. Ahead of the Summit the White House also announced that 51 US companies committed to donating, investing or raising more than US$650 million to aid the refugee crisis. This includes a US$500 million donation by investor and philanthropist George Soros.

“It speaks volumes that one individual has pledged more than more than China, the world’s most populous and second wealthiest country, which pledged US$300 million,” said Salil Shetty.

“The commitment to take some refugees in is a small step forward, but the absence of a desperately-needed global system for sharing responsibility after two major summits means states have missed a rare opportunity to take a giant leap towards solving the crisis.

“While world leaders smile for the cameras, this week’s meagre summit outcomes do not let them off the hook. Until more countries, especially wealthy ones, take in a significantly greater and fairer share of the world’s refugees, they will remain on the wrong side of history.”

Speak out for refugees’ rights and sign the pledge: