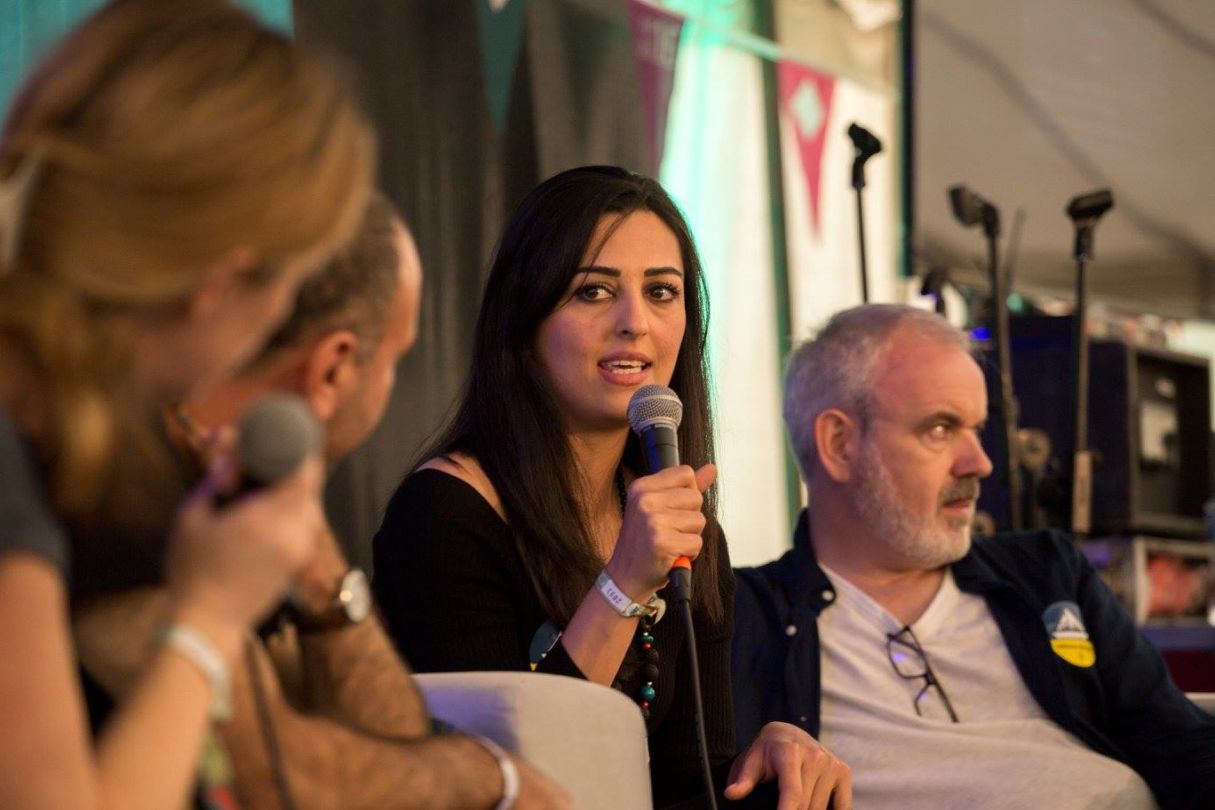 Syrian journalist, Razan Ibraheem reflects on her experience volunteering on the Greek island of Samos.

In 2011, I left Syria to study in Ireland. I never imagined that five years later I would be volunteering to help Syrian refugees forced to flee our home.

On my first morning on Samos, I meet Amal. Her name means ‘hope’ in Arabic. “After I lost my five year old child in a bomb we decided to leave our home in Daraa, Syria. We had a few thousand Syrian pounds with us and gave it all to the people smugglers. We don’t have a penny left. My husband, three children and I travelled from Jordan to Turkey. From there, we took the deadly boat to Greece.”

“We have been living in this camp for more than five months. What is our crime? Are we being punished for escaping death? My children have been out of school for three years. They used to be top students. I was so proud of them,” she trails off.

Amal’s husband, Majed, sitting in the corner of the tent speaks: “Can we go home to Syria?” he asks to my surprise. Surely, no father would choose to return to the conflict.

“We are dying slowly in this place. We would rather die in dignity under a Syrian sky than the slow death we are given here. We have lost everything: our money, our dignity and our humanity.”

I thank them and leave their tent. The question of whether or not Syria would be a better option for them stays with me.

Amal and her family are trapped in Greece, languishing in this refugee camp.

I try to lift my eyes from the dirt as I walk to the medical centre. It’s my turn to assist the doctor. I meet Reem and her two year old son. She went to the hospital in Samos the night before suffering from blood poisoning. Despite her critical situation, she was discharged after half an hour with a few painkillers in her hand. She walked three hours under the hot Greek sun to bring her son to the medical centre today. She arrived weak, barely able to walk. Talking is a great effort, but her outrage gives her strength.

“Do you see my son?” she asks, “his father doesn’t know him. They have never met.”

Reem gave birth in Aleppo in a small room surrounded by bombings.  Her husband fled to Germany hoping for a quick family reunification. “He did not want me to go with him as the journey is very dangerous.” They got no response to his application for family reunification, so Reem was forced to leave Syria with her baby.  She swallows and carries on:

“I was arrested seven times by Turkish police trying to cross the border. My son and I spent night after night in prison. But I do not care. We have been in this camp for four months but we will make it. We will get to Germany. I am dreaming of the moment when my son and husband meet for the first time.”

These stories are very common in Samos. During my time volunteering there, I heard countless heart-breaking stories of health problems, depression, loss and death. Almost a thousand refugees are trapped here surrounded by a metal fence. They are in limbo. Fathers waiting for children, wives waiting for husbands and lovers who cannot wait to be reunited.

Since the EU-Turkey deal on March 19, the number of the refugees crossing the Mediterranean has dropped dramatically. When I volunteered on the island of Kos at the same time last year, we helped about 300 refugees every day. Now, the average number of refugees arriving in Samos is about 75 per week. According to sources on the ground, the coast guards capture most people before they get to the shore and take them directly to the refugee camp. Refugees are kept as prisoners of a war that has no end in sight. Samer has been living in the camp for four months. “We have not been allowed to leave for almost two months. We’re surrounded by fences and the police. What is this if not a prison?” he said.

I am lucky. I am able to come here to volunteer. I am privileged to be able to get into the depths of these people’s hearts and hear their incredible stories. There is no language or cultural barrier; we are all Syrians. I walk on, my heart weighed down by stories of suffering. Before leaving the medical centre, I asked myself “what are the two most common words I heard in all of the refugees’ stories?”

Everyone talked about waiting and hoping. One is never far from the other. These people eat, drink and sleep with hope. It keeps them smiling. It keeps them alive.  I lift my head.