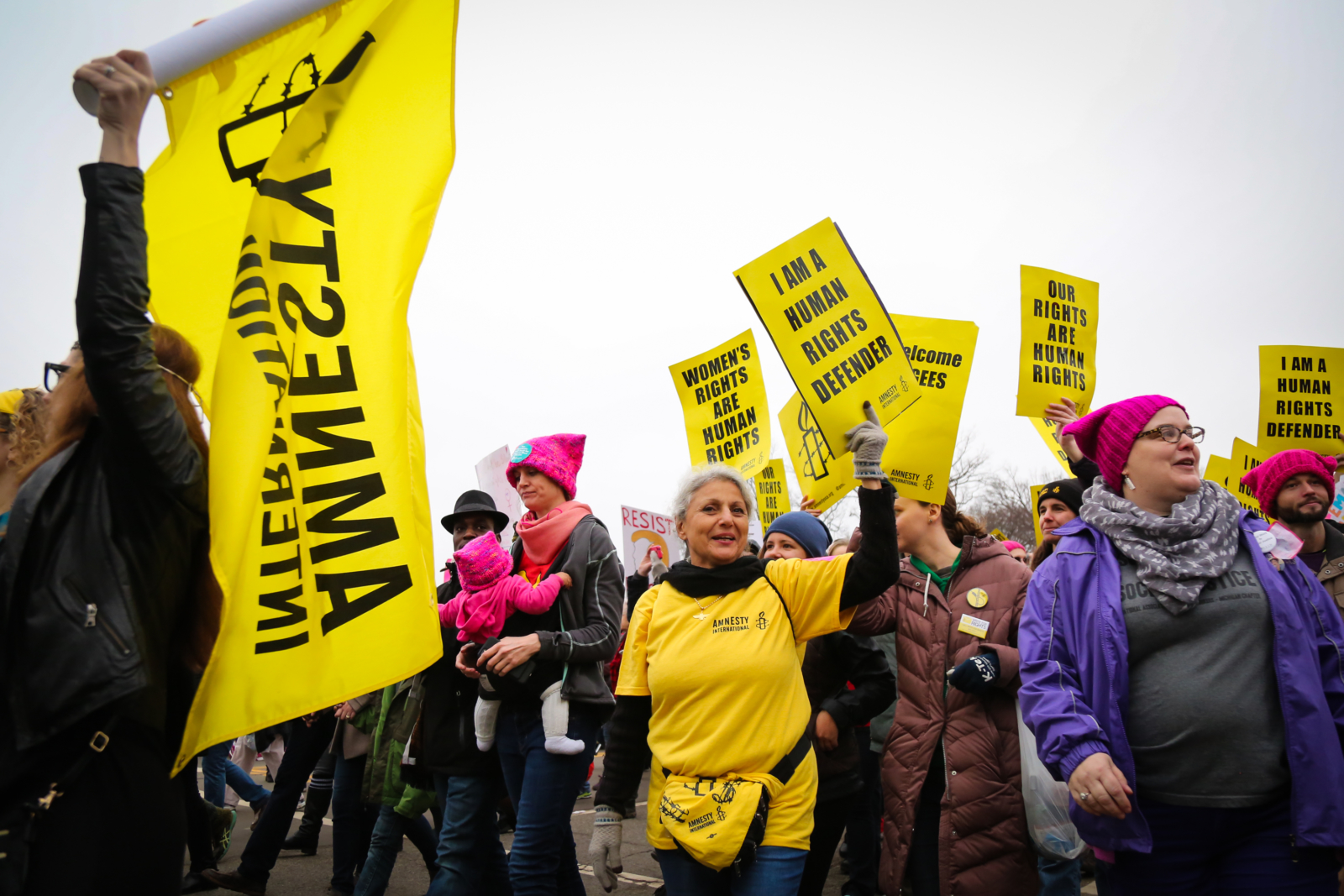 Politicians wielding a toxic, dehumanising “us vs them” rhetoric are creating a more divided and dangerous world, warned Amnesty International today as it launched its annual assessment of human rights around the world. The report, The State of the World’s Human Rights, delivers the most comprehensive analysis of the state of human rights around the world, covering 159 countries. It warns that the consequences of “us vs them” rhetoric setting the agenda in Europe, the United States and elsewhere is fuelling a global pushback against human rights and leaving the global response to mass atrocities perilously weak.

“2016 was the year when the cynical use of ‘us vs them’ narratives of blame, hate and fear took on a global prominence to a level not seen since the 1930s. Too many politicians are answering legitimate economic and security fears with a poisonous and divisive manipulation of identity politics in an attempt to win votes. Divisive fear-mongering has become a dangerous force in world affairs. Whether it is Trump, Orban, Erdoğan or Duterte, more and more politicians calling themselves anti-establishment are wielding a toxic agenda that hounds, scapegoats and dehumanises entire groups of people. Today’s politics of demonisation shamelessly peddles a dangerous idea that some people are less human than others, stripping away the humanity of entire groups of people. This threatens to unleash the darkest aspects of human nature,” said Colm O’Gorman, Executive Director of Amnesty International Ireland.

Seismic political shifts in 2016 exposed the potential of hateful rhetoric to unleash the dark side of human nature. The global trend of angrier and more divisive politics was exemplified by Donald Trump’s poisonous campaign rhetoric, but political leaders in various parts of the world also wagered their future power on narratives of fear, blame and division. This rhetoric is having an increasingly pervasive impact on policy and action. In 2016, governments turned a blind eye to war crimes, pushed through deals that undermine the right to claim asylum, passed laws that violate free expression, incited murder of people simply because they are accused of using drugs, justified torture and mass surveillance, and extended draconian police powers.

Governments also turned on refugees and migrants; often an easy target for scapegoating. Amnesty International’s Annual Report documents how 36 countries violated international law by unlawfully sending refugees back to a country where their rights were at risk. Most recently, President Trump put his hateful xenophobic pre-election rhetoric into action by signing an executive order in an attempt to prevent refugees from seeking resettlement in the USA; blocking people fleeing conflict and persecution from war-torn countries such as Syria from seeking safe haven in the country.

Meanwhile, Australia purposefully inflicts terrible suffering by trapping refugees on Nauru and Manus Island, the EU made an illegal and reckless deal with Turkey to send refugees back there, even though it is not safe for them, and Mexico and the USA continue to deport people fleeing rampant violence in Central America.

Elsewhere, China, Egypt, Ethiopia, India, Iran, Thailand and Turkey carried out massive crackdowns. While other countries pursued intrusive security measures, such as prolonged emergency powers in France and unprecedented catastrophic surveillance laws in the UK. Another feature of “strongman” politics was a rise in anti-feminist and -LGBTI rhetoric, such as efforts to roll back women’s rights in Poland, which were met with massive protests.

“Instead of fighting for people’s rights, too many leaders have adopted a dehumanising agenda for political expediency. Many are violating rights of scapegoated groups to score political points, or to distract from their own failures to ensure economic and social rights. In 2016, these most toxic forms of dehumanisation became a dominant force in mainstream global politics. The limits of what is acceptable have shifted. Politicians are shamelessly and actively legitimising all sorts of hateful rhetoric and policies based on people’s identity: misogyny, racism and homophobia. The first target has been refugees and, if this continues in 2017, others will be in the cross-hairs. The reverberations will lead to more attacks on the basis of race, gender, nationality and religion. When we cease to see each other as human beings with the same rights, we move closer to the abyss,” said Colm O’Gorman.

Amnesty International is warning that 2017 will see ongoing crises exacerbated by a debilitating absence of human rights leadership on a chaotic world stage. The politics of “us vs them” is also taking shape at the international level, replacing multilateralism with a more aggressive, confrontational world order.

“With world leaders lacking political will to put pressure on other states violating human rights, basic principles from accountability for mass atrocities to the right to asylum are at stake. Even states that once claimed to champion rights abroad are now too busy rolling back human rights at home to hold others to account. The more countries backtrack on fundamental human rights commitments, the more we risk a domino effect of leaders emboldened to knock back established human rights protections,” said Colm O’Gorman.

Despite these challenges, international indifference to war crimes has become an entrenched normality as the UN Security Council remains paralysed by rivalries between permanent member states.

“The beginning of 2017 finds many of the world’s most powerful states pursuing narrower national interests at the expense of international cooperation. This risks taking us towards a more chaotic, dangerous world. A new world order where human rights are portrayed as a barrier to national interests makes the ability to tackle mass atrocities dangerously low, leaving the door open to abuses reminiscent of the darkest times of human history. The international community has already responded with deafening silence after countless atrocities in 2016: a live stream of horror from Aleppo, thousands of people killed by the police in the Philippines’ ‘war on drugs’, use of chemical weapons and hundreds of villages burned in Darfur. The big question in 2017 will be how far the world lets atrocities go before doing something about them,” said Colm O’Gorman.

Amnesty International is calling on people around the world to resist cynical efforts to roll back long-established human rights in exchange for the distant promise of prosperity and security. The report warns that global solidarity and public mobilisation will be particularly important to defend individuals who stand up to those in power and defend human rights, who are often cast by governments as a threat to economic development, security or other priorities.

Amnesty International’s annual report documents people killed for peacefully standing up for human rights in 22 countries in 2016. They include those targeted for challenging entrenched economic interests, defending minorities and small communities or opposing traditional barriers to women’s and LGBTI rights. The killing of the high-profile Indigenous leader and human rights defender Berta Cáceres in Honduras on 3 March 2016 sent a chilling message to activists but nobody was brought to justice.

“We cannot passively rely on governments to stand up for human rights, we the people have to take action. With politicians increasingly willing to demonise entire groups of people, the need for all of us to stand up for the basic values of human dignity and equality everywhere has seldom been clearer. Every person must ask their government to use whatever power and influence they have to call out human rights abusers. In dark times, individuals have made a difference when they took a stand, be they civil rights activists in the USA, anti-apartheid activists in South Africa, or women’s rights and LGBTI movements around the world. We must all rise to that challenge now,” said Colm O’Gorman.