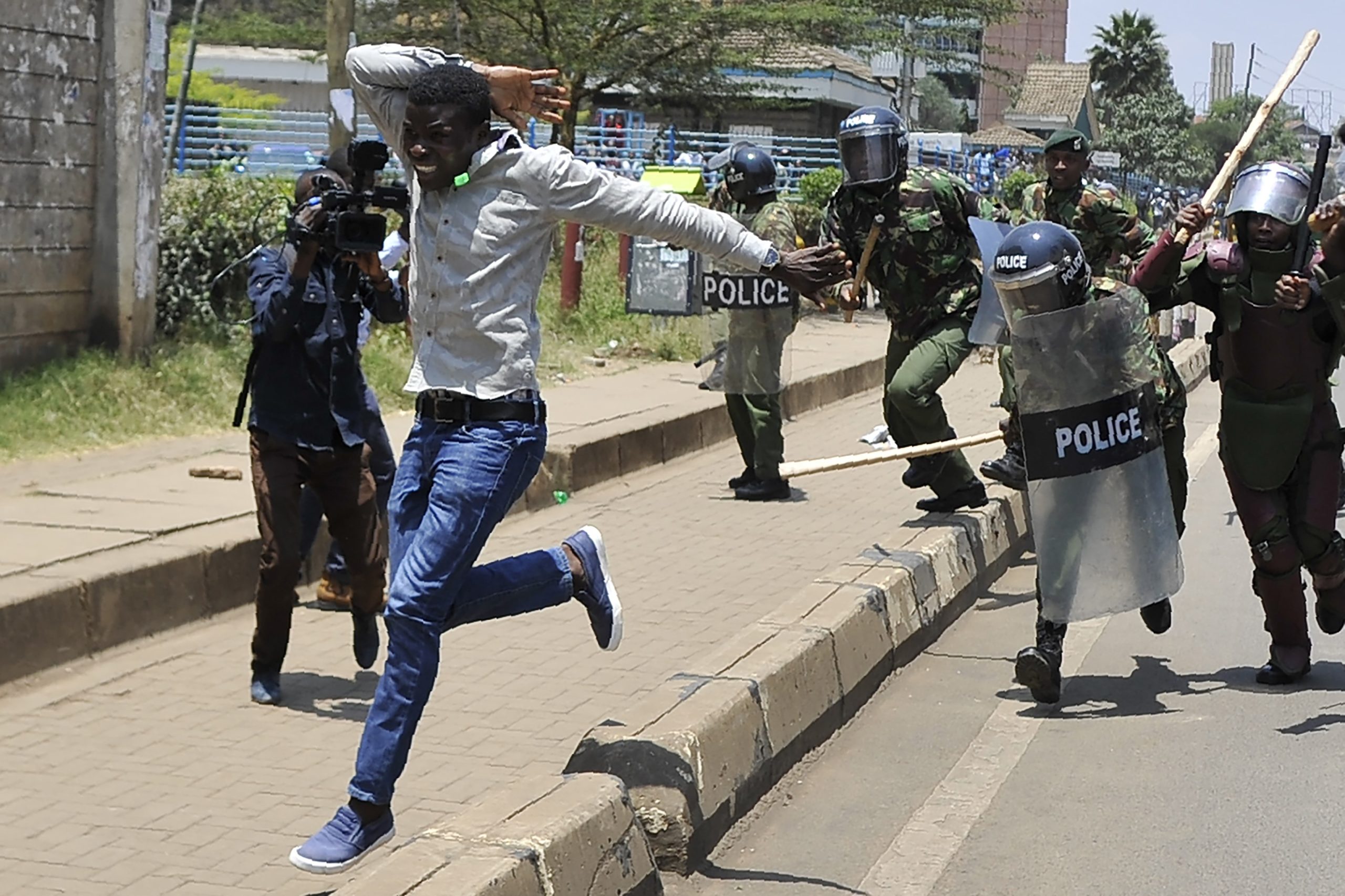 From the streets of Minneapolis to the favelas of Rio de Janeiro, unlawful use of force by police can end in death, injury, and devastation.

As we’ve seen too many times, in the USA and elsewhere, sometimes police kill or seriously injure people during arrests fuelled by racism.

In countless other cases, police are quick to use force in response to protests or demonstrations. Throughout 2019 and 2020, Hong Kong police have repeatedly deployed weapons like tear gas and rubber bullets in an unlawful way against protesters.

All too often, officers who kill or injure people after using force unlawfully are not brought to justice.

We need to make sure that police stop using force against the law, and that those who kill unlawfully are brought to account – no more excuses.

What is “police brutality”?

The term “police brutality” is sometimes used to refer to various human rights violations by police. This might include beatings, racial abuse, unlawful killings, torture, or indiscriminate use of riot control agents at protests.

Why is police brutality a human rights issue?

At its worst, unlawful use of force by police can result in people being deprived of their right to life. If police force is unnecessary or excessive, it may also amount to torture or other ill-treatment.

Unlawful force by police can also violate the right to be free from discrimination, the right to liberty and security, and the right to equal protection under the law.

Are police allowed to kill people?

There are strict international laws and standards governing how and when police can use force – particularly lethal force.

The UN Basic Principles on the Use of Force and Firearms by Law Enforcement Officials (BPUFF) is the key international instrument that deals with police use of force.

The most important thing to remember is this: it is the utmost obligation of state authorities, including police, to respect and protect the right to life.

Under international law, police officers should only ever use lethal force as a last resort. This means when such force is strictly necessary to protect themselves or others from the imminent threat of death or serious injury, and only when other options for de-escalation are insufficient.

Many killings by the police that we have seen around the world clearly do not meet this criteria.

In the USA, George Floyd, Michael Brown, Breonna Taylor, Eric Garner and too many other Black people who have been killed by police were unarmed.

During protests in Iran in November 2019, police shot and killed hundreds of protesters who posed no risk, including at least 23 children.

And in the Philippines, witnesses have described seeing police shoot poor people who were suspected of using or selling drugs as they were on the ground begging for mercy.

What about national laws?

All governments have a duty to incorporate international human rights law into their domestic legislation, but many have failed to do this adequately.

For example, Mexico’s new National Law on the Use of Force does not limit use of lethal force to situations where it is necessary to protect the lives of others. It does not require that officers use the minimum level of force to resolve a situation.

In the USA, nine states have no laws at all on the use of lethal force by law enforcement officers.

Often countries shut down the doors of justice domestically and victims have to rely on international tribunals to seek truth, justice and reparations.

In 2011, Amnesty raised concerns about the lack accountability in France for the deaths in custody of Ali Ziri, Mohammed Boukrourou, Lamine Dieng, Abou Bakari Tandia and Abdelhakim Ajimi, all men from ethnic minority backgrounds. After struggling to get justice in France, three of these cases were referred to the European Court of Human Rights, which has so far found that French police violated Ali Ziri’s right to life, and that their treatment of Mohammed Boukrourou constituted inhuman and degrading treatment.

In countries with high rates of killings by police, there is often a combination of factors including inadequate laws, racial or other forms of discrimination, insecurity or conflict, and entrenched impunity.

Governments who routinely trample on other human rights like freedom of expression and peaceful assembly often authorize heavy-handed police responses to protests and demonstrations. We’ve seen this recently in Iran, Iraq, Sudan, Hong Kong and Nicaragua.

Impunity for killings by police often leads to a deadly cycle of violence. In Brazil for example, officers routinely kill people who pose no threat – mostly young Black men – safe in the knowledge that these killings are rarely investigated or prosecuted.

How many people have died at the hands of the police?

It’s hard to get reliable figures on killings by police because many governments do not collect or publish this data.

The Small Arms Survey says that in each year between 2007 and 2012, an estimated 19,000 people were killed during ‘legal interventions’ (encounters with police).

Most of the available data refers to specific countries or time periods, and are often estimates by NGOs or human rights groups.

Here are some examples:

In 2014, Nakiea Jackson was shot dead by police in Kingston, Jamaica, while he was working at his job as a cook.  Police had been looking for an alleged crime suspect and Nakiea fit the broad description, though there was nothing to link him to any crime. Since then, Nakiea’s family and witnesses in the case have suffered intense intimidation from police as they have sought justice.

International human rights law strictly prohibits all forms of discrimination. No one should be treated differently by law enforcement because of their race, gender, sexual orientation or gender identity, religion or belief, political or other opinion, ethnicity, national or social origin, disability, or other status.  Everyone has the right to equal treatment under the law.

Yet racism and other forms of discrimination are built into law enforcement and justice systems around the world; from racial profiling and discriminatory police checks, to selective enforcement of drug policies and broad application of anti-terror laws.

In the UK, Amnesty International has documented how the Gangs Matrix, a racially biased database used by London’s Met Police, criminalizes and stigmatizes young Black men. Many people have been labelled as suspected gang members for reasons as trivial as the music they listen to or the videos they watch online.

Once on the Gangs Matrix, individuals are targeted for stop and search operations by police, while the stigma of being associated with a ‘gang’ can make it harder to find jobs, housing or education.

In 2018, the Information Commissioner’s Office found the Gangs Matrix was potentially breaking data protection laws and failed to distinguish between victims of crime and offenders, and some limited reforms have been introduced.

According to the French Ombudsman, young men perceived as North African or Black are 20 times more likely to be subject to identity checks by the police.

Following the introduction of emergency laws in France in 2015, police carried out thousands of discriminatory raids and house arrests, mostly targeting Muslims. Police burst into mosques, forced open doors, and sometimes handcuffed or pointed firearms at people, some of whom were targeted solely on the basis of their religious beliefs.

In July 2016 Adama Traoré, a young Black man, died in police custody after being arrested during an identity check and pinned to the ground by three law enforcement officials. Adama’s family is still waiting for justice.

More examples of discrimination in policing

LGBTI people around the world are subjected to routine harassment and abuse by police.

In 2017, for example, authorities in the Russian republic of Chechnya unleashed a wave of attacks on people believed to be gay or lesbian. Dozens of gay men in Chechnya were abducted and tortured. Many were killed at secret detention sites.

In the Dominican Republic, sex workers, and especially trans women who are sex workers, face appalling abuse at the hands of police including rape, beatings and humiliation.

Killings of Black people in the USA

On 25 May 2020, George Floyd, a 46-year old Black man, died after a police officer in Minneapolis, Minnesota kept his knee on his neck for nearly nine minutes.

This horrific killing sparked widespread protests across the USA and beyond, calling for the officers involved to be held accountable and systemic change in policing more broadly.

George’s death came in the wake of a series of acts of racist violence against Black people that illustrates astounding levels of violence and discrimination. The police in the USA commit human rights violations at a shockingly frequent rate, particularly against racial and ethnic minorities, and especially Black people.

Protesters want the US justice system to be fundamentally reformed to end the deadly police violence that ravages communities of colour, particularly Black communities, across the country.

5 facts about police use of force in the USA

Stopping police abuses in the USA

Civil society organisations have long been calling for police reform in the USA. These critical steps could make everyone safer:

Nobody is above the law – especially those who have a duty to uphold it.

All cases of police use of lethal force should be subject to a thorough, independent, impartial and transparent investigation and if the evidence indicates that the killing was unlawful, the police officer responsible should be criminally prosecuted.

But Amnesty has documented how police officers who unlawfully kill or injure people often get away with it.

There are lots of reasons why this happens. In some cases, police and security forces threaten the judiciary, witnesses or survivors, pressuring them to drop charges. Other times, there are laws enacted to provide the police with immunity or otherwise obstruct justice, even if they act against the law – in Brazil for example.

In the Philippines, President Duterte ordered police forces to kill anyone they believe to be connected to the drugs trade when he assumed office in June 2016 and pledged to protect security forces from prosecution. When the President sanctions murder and promises immunity, accountability is almost impossible.

Governments have an obligation to ensure that everyone can enjoy the right to freedom of peaceful assembly, including through protests.

There are clear international guidelines for police conduct during protests:

Every country has its own domestic laws and there is no one-size-fits-all prescription for making them fairer and safer.

Amnesty International’s detailed guidelines on the use of force by law enforcement set out clearly how police and other security forces around the world can improve their laws, policies and practices.

Some of the key recommendations are: