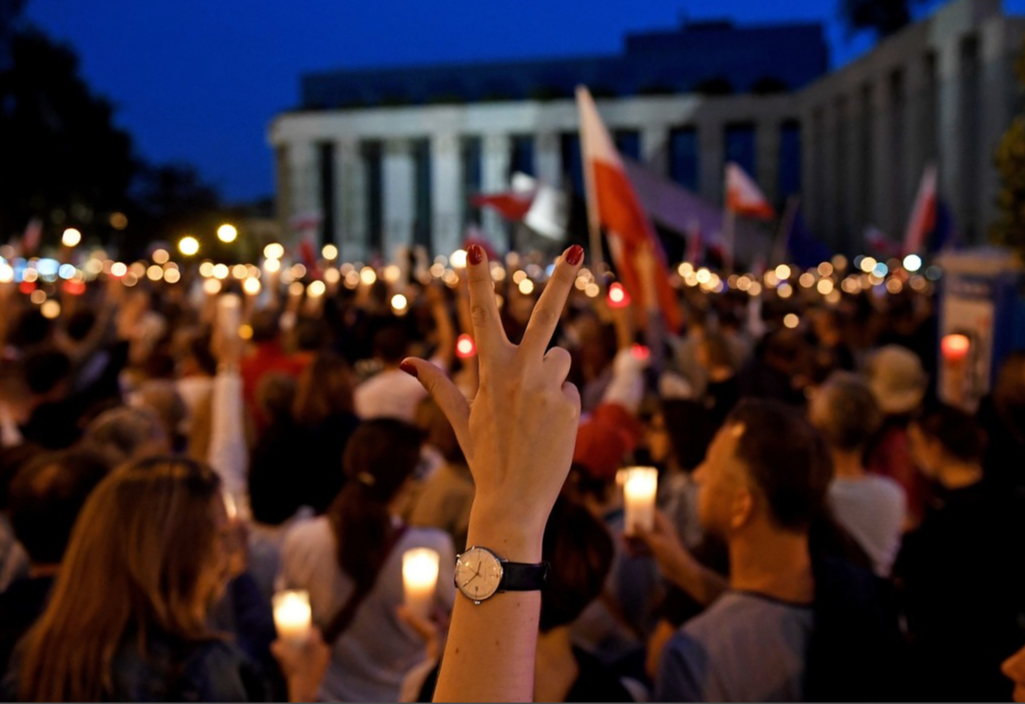 The Polish government is cracking down on peaceful protesters in a blatant attempt to dissuade further protests, Amnesty International said in a new report out today.

The report Poland: On the streets to defend human rights, documents how the authorities use techniques such as surveillance, harassment and prosecution to disperse and prevent mass protests. Since 2016, thousands of people have taken to the streets to peacefully protest against repressive legislation, including on women’s rights and proposed laws threatening the rule of law.

“As Poland’s government continues to tighten its control over the judiciary, popular resistance continues to grow. But the government is doing all it can to block the protests. Police are monitoring, harassing, and even prosecuting protesters simply for speaking up. Both the UN and EU were quick to acknowledge that the President’s veto of legislation that would have gutted the independence of the judiciary was largely thanks to the mass protests. Now, these protesters need the support of the international community in their ongoing struggle,” said Colm O’Gorman, Executive Director of Amnesty International Ireland.

In July 2017, thousands of protestors in more than 50 cities in Poland joined demonstrations in opposition to government proposals that threatened the independence of the judiciary. The government responded by subjecting peaceful protesters to a range of police measures obstructing protestors and violating their right to freedom of expression and assembly. The significant police presence erected metal fences to keep the protesters far from and out of sight of the parliamentary buildings. Hundreds of police officers patrolled the area daily and used a variety of techniques to physically prevent people from protesting, including surrounding or otherwise containing groups of people – a practice known as “kettling” – cordoning off streets, and verbally and physically threatening and intimidating protesters.

On the night of 18 July, a woman named Klementyna was on one of the exit roads taking pictures of the protests. She said the police physically assaulted her: “I was just standing there and one police officer grabbed me without any warning and pushed me against a traffic light post. He hit me in the face. I wasn’t resisting… After that, more police officers came to the site, they completely blocked the street and kettled me there.” The police subsequently told the media that Klementyna did not have any evidence to support her allegations of police abuse.

In addition to heavy-handed police tactics, new laws continue to impose undue restrictions on the right to peaceful assembly. In December 2016, the Polish parliament adopted the restrictive Law on Assemblies, which prioritises “cyclical demonstrations”, that is those demonstrations organised by the same people at the same location several times a year. Throughout 2017, the government has given such priority to a monthly pro-government rally — commemorating the 2010 Smolensk plane crash that killed the then president Lech Kaczyński and 95 other people –- at the expense of other requests to hold peaceful assemblies and in direct violation of international human rights law.

Despite bans on alternative demonstrations, peaceful protesters continued to convene monthly counter-demonstrations throughout 2017. Dozens of protesters have been prosecuted for minor offences such as ‘interference with a legal assembly’; or for criminal offences such as ‘malicious interference with a religious act’, since the monthly pro-government rallies have been characterised as religious processions.

Protestors in Poland face other significant barriers to making their objections to restrictive laws seen and heard. As well as curtailing peaceful protests physically, the authorities have also subjected protesters to intense monitoring and surveillance, including following them and visiting them at home. Many have been subjected to charges and are being prosecuted.

One university student who had been charged with ‘restricting the freedom of the media’ for loudly protesting around a journalist who was broadcasting in a public space in December 2016, told Amnesty International: “They are certainly trying to scare people so that they don’t protest.”

“The Polish government is trying to instil fear in those who want to peacefully protest. The prospect of peaceful protesters being criminalised simply for exercising their rights to freedom of expression and peaceful assembly paints a dark picture of Poland today. These petty and vindictive charges are a reflection of the shrinking space for civil society and should be dropped immediately,” said Colm O’Gorman.