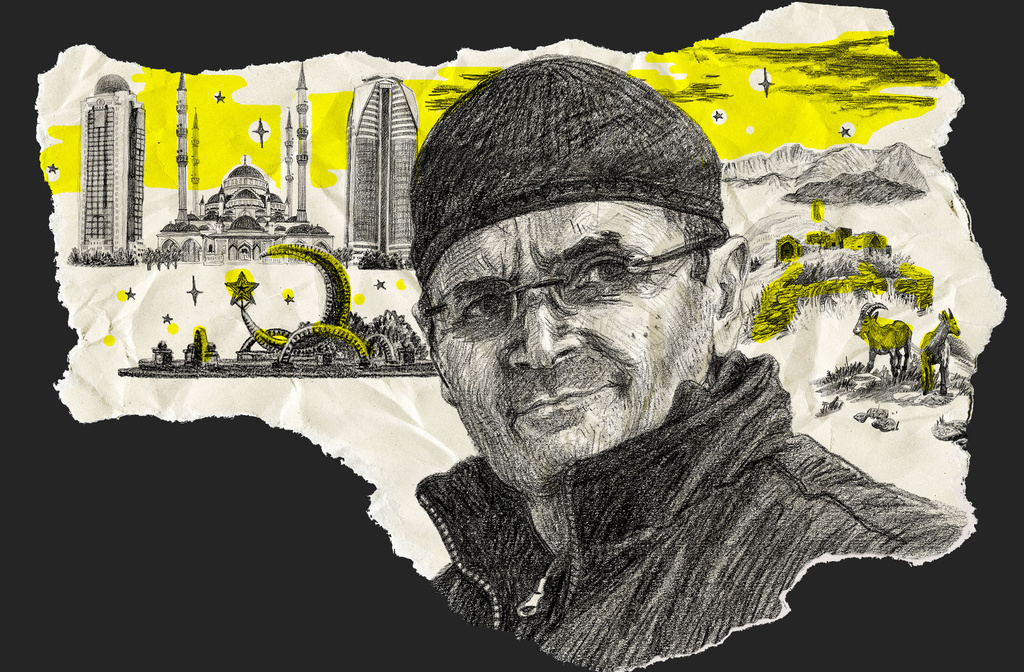 Head of the office of the Human Rights Centre “Memorial” in Grozny, Chechen Republic

Oyub Titiev began his human rights work after witnessing war in Grozny, and having to identify bodies of people killed. He also had been involved in youth work, being both a teacher and setting up a sports club for boys. He became the head of Human Rights Centre “Memorial” after his colleague Nataliya Estemirova was kidnapped and murdered. Memorial work on a wide range of human rights issues, including support to political prisoners and migration and human rights.

Oyub Titiev’s story is told by his colleague Aleksandr Cherkasov.

I’ve known Oyub for a very long time. For many years, we’ve worked together in the Human Rights Centre “Memorial”, a network of organizations and associations working to address past and present human rights violations in Russia. I am based in Moscow, and Oyub has been working in Grozny in the Chechen Republic, for almost 10 years. He was born in Central Asia, the region where the Chechen people were exiled in 1944. I remember him telling me that his ancestors were among the first settlers in the village at the foothills of the Caucasus and their house was in the very centre of the village. Oyub’s past is quite common for a Chechen person in the USSR: after Stalin’s death, his family returned home from Central Asia, he then served in the Soviet Army and obtained a higher education degree.

Oyub always loved sports and he was a gifted teacher. He taught physical education in a school and set up a sports club where boys learned boxing. He was very proud of the club and followed the progress of his former pupils. Tragically, a generation of his students were enrolled in the separatists’ armed forces and were killed in the Chechen wars. It may have been his sense of responsibility for them that prompted Oyub to become a human rights defender.

In the 1990s, Oyub moved to Grozny where there was an ongoing war. He had to identify and take away the bodies of those who were killed in battle. These terrifying events followed so-called “clean-up” operations, a campaign of mass arrests and enforced disappearances carried out by the federal forces. At the time, when it seemed like nothing could be done to protect these people, someone had to come in to gather scraps of information in order to find the disappeared, and try and get them released. This work required somebody who takes responsibility for himself, for his students and for everyone. It was Oyub who did this courageous work.

In 2000, Natasha Estemirova, who worked for the Memorial office in Grozny, came to Kurchaloi, where Oyub lived with his family. She collected evidence of abductions and killings, of pillages committed by the military during the “clean-up” operation in the village. Oyub volunteered to help her. Then he expanded his work to the whole of Kurchaloi District and later also to the neighbouring areas. In 2002, he joined Memorial as a staff member working in one of its offices in the town of Gudermes. Because of his human rights work, Oyub received a number of threats, including from the Head of Chechnya, Ramzan Kadyrov.

In July 2009, Natasha Estemirova was abducted and killed in Grozny. Memorial’s work in Chechnya was suspended. The head of the Memorial office in Grozny had to leave the republic because of the threats made against him and his family. But Oyub Titiev and other members of staff urged the management of Memorial in Moscow to continue the organisation’s work in Chechnya, and in December 2009 the work resumed. Meanwhile, the threats continued. In 2010, Ramzan Kadyrov was speaking on a Chechen television channel when he said that “a man and a woman from Memorial in Gudermes”, in clear reference to Oyub and his colleague, were “enemies of the people, the law and the state”. Those who are familiar with the day-to-day realities of Chechnya understand that such a statement from Kadyrov amounts to a serious threat. In response, Oyub took on an additional responsibility: he became the head of Memorial in Grozny, Chechnya.

Four years later, during a meeting with members of the security forces, Ramzan Kadyrov issued his “final warning” and stated that “there will be no more”. At the time, Oyub not only managed the organisation’s work but also provided consultations for people who came to Memorial with their grievances. He provided legal assistance and prepared reports on human rights abuses. He constantly travelled to the scene of incidents all over the Chechen Republic, interviewed victims of torture and violence, and the relatives of people who were taken away by armed men to unknown locations and disappeared. Oyub looked for eyewitnesses, always with the main concern of providing safety to all those whom he interviewed.

The last time Oyub received a threat was in December 2017 when the Chechen parliament speaker accused “pseudo defenders who work in various committees and centres, and journalists of the most deceitful media” of prompting international sanctions against high-level authorities, including the Head of Chechnya. Kadyrov’s social media accounts were blocked as part of the sanctions. Two weeks after this statement, Oyub Titiev was arbitrarily detained.  In early 2018, he was stopped while driving his car by the police and held incommunicado for several hours. The police claimed that they found drugs in his car, but the search was conducted with such significant procedural violations that police had to re-enact it, hours later and in the presence of “witnesses”. If convicted, Oyub faces up to 10 years in prison. It is clear that this is again a targeted assault to silence him and his human rights work.

It's not fair play if you imprison the captain of #TeamBrave. President .@PutinRF_Eng we demand to #FreeOyub. Click To Tweet