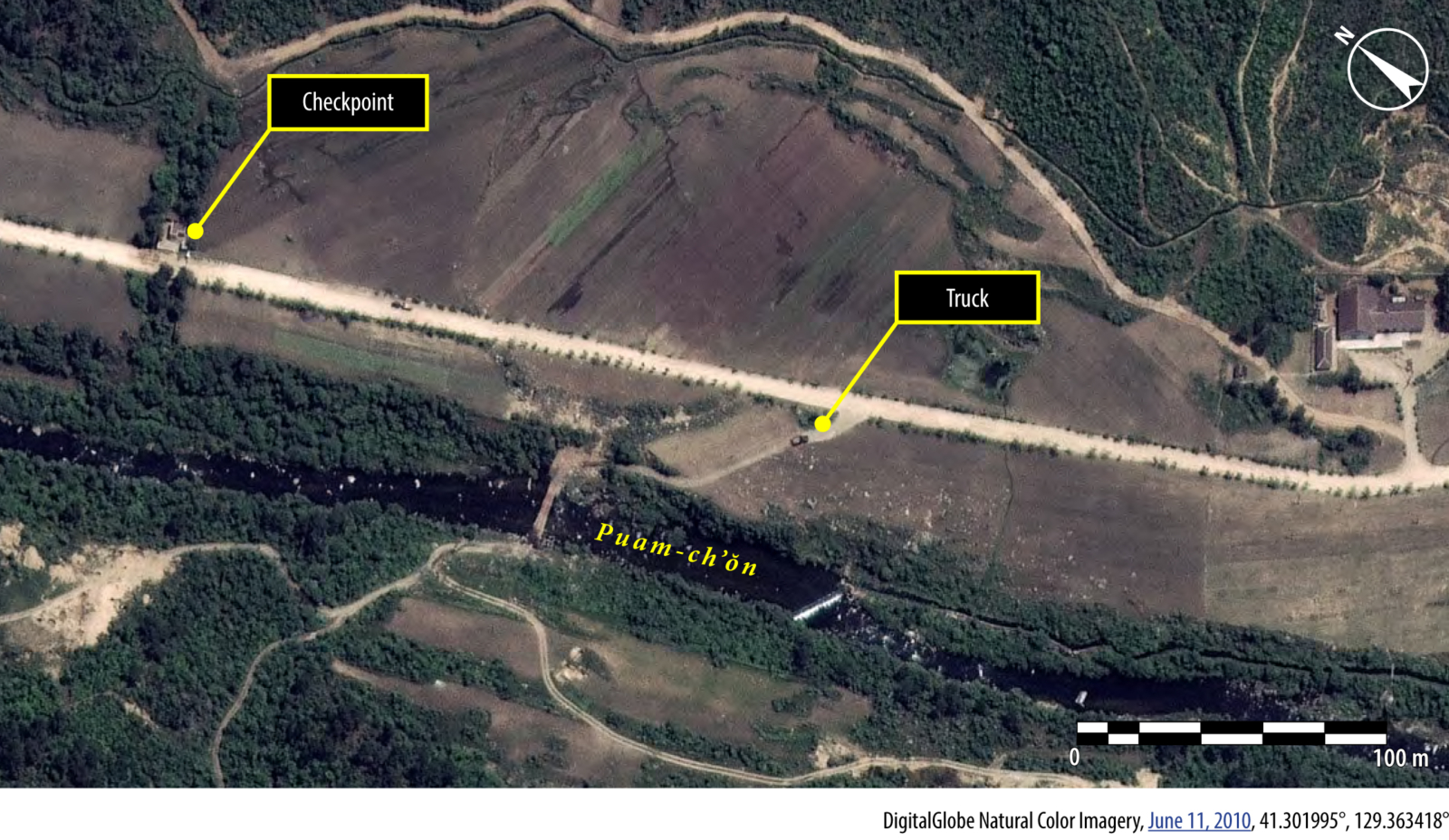 Satellite imagery of North Korea’s network of political prison camps show its government is continuing to maintain, and even invest, in these repressive facilities. These camps constitute the cornerstone of the country’s large infrastructure dedicated to political repression and social control that enables widespread and systematic human rights abuses. Assessments of the satellite images of two political prison camps – known as kwanliso — collected in May and August show the addition of new guard posts, upgrading of a reported crematorium, and on-going agricultural activities.

Amnesty International conducted research on two camps, kwanliso 15 (also known as Yodok) and kwanliso 25 to assess the status of these camps since the UN Commission of Inquiry’s 2014 report which found the gravity, scale, and nature of human rights violations in North Korea without parallel in the contemporary world.

“The imagery we’ve analyzed is consistent with our prior findings of forced labour and detention in North Korea’s kwanliso” said Micah Farfour, Amnesty International’s imagery analyst.

The same report documented rape, infanticide, torture, deliberate starvation, forced labour, and executions against the up to 120,000 men, women, and children held incommunicado in political prison camps nationwide at the time. Many of those detained in these camps have committed no crime, but are collectively punished through guilt by association as family members of those deemed threatening to the regime.

“Taken together, the imagery we’ve analyzed is consistent with our prior findings of forced labour and detention in North Korea’s kwanliso, and the physical infrastructure the government uses to commit atrocities are in working order,” said Micah Farfour, Amnesty International’s imagery analyst.

During the course of our three-year detention, often we did not meet our targets because we were always hungry and weak. We were punished with beatings and also reductions in our food quota

North Korea has consistently denied access to human rights observers, researchers, and others, hampering investigation into the abuses committed in the camps and the rest of the country. However, the infrastructure required to commit the abuses documented by Amnesty International, the Commission, and others is so massive as to be observable from space. As has been done in the past, Amnesty International secured high-resolution satellite imagery in order to assess this infrastructure and they show ongoing maintenance of, and further investment in, two such camps. 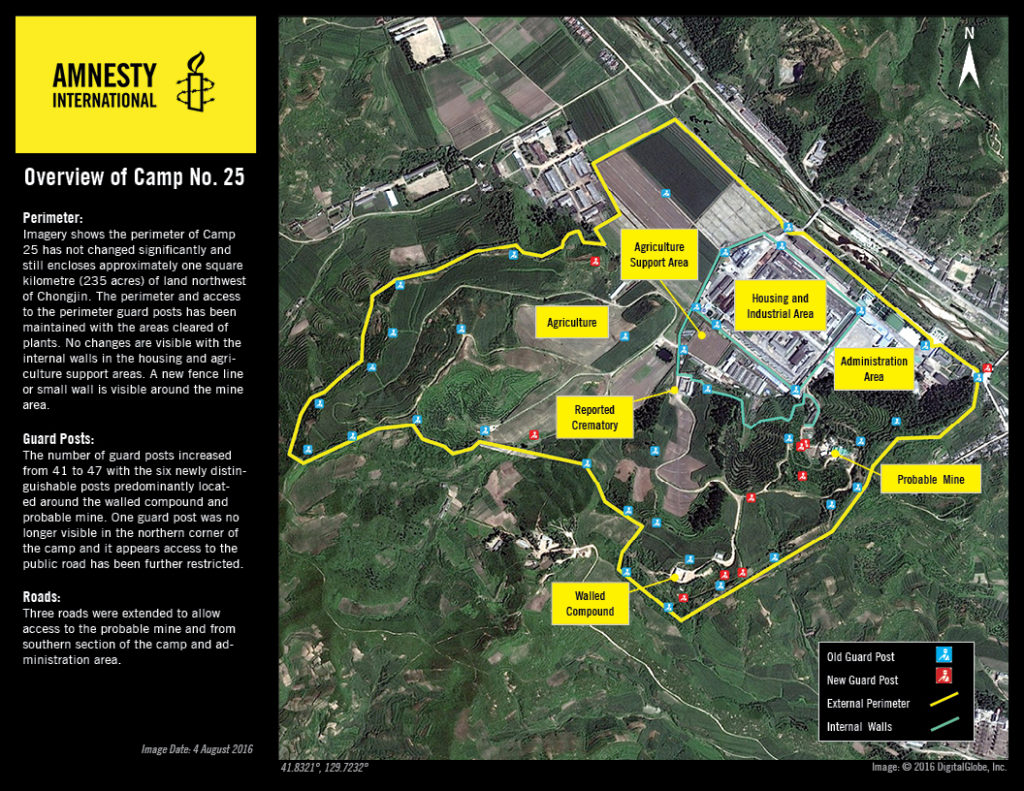 Overview of Camp No.25: Satellite imagery from August 2016 shows the addition of 6 new guard posts, the maintenance of 41 existing posts, and indication of a roof upgrade of a reported crematory in the camp all strongly suggest that Camp 25 remains an active detention facility. © 2016 DigitalGlobe, Inc 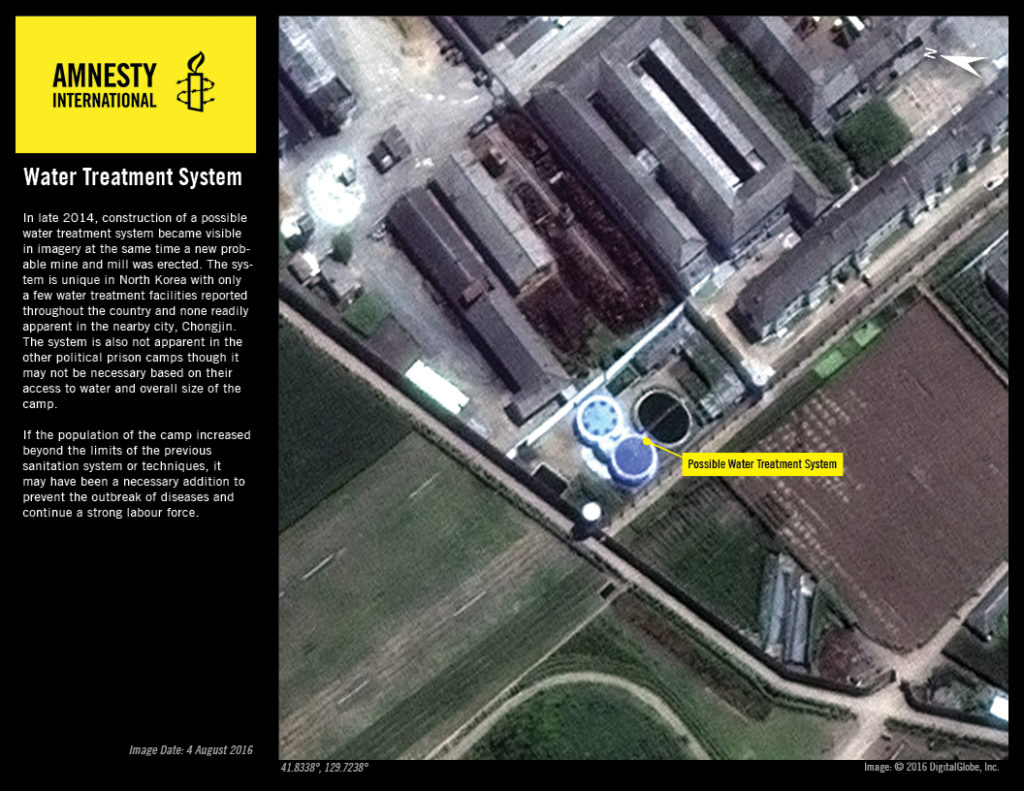 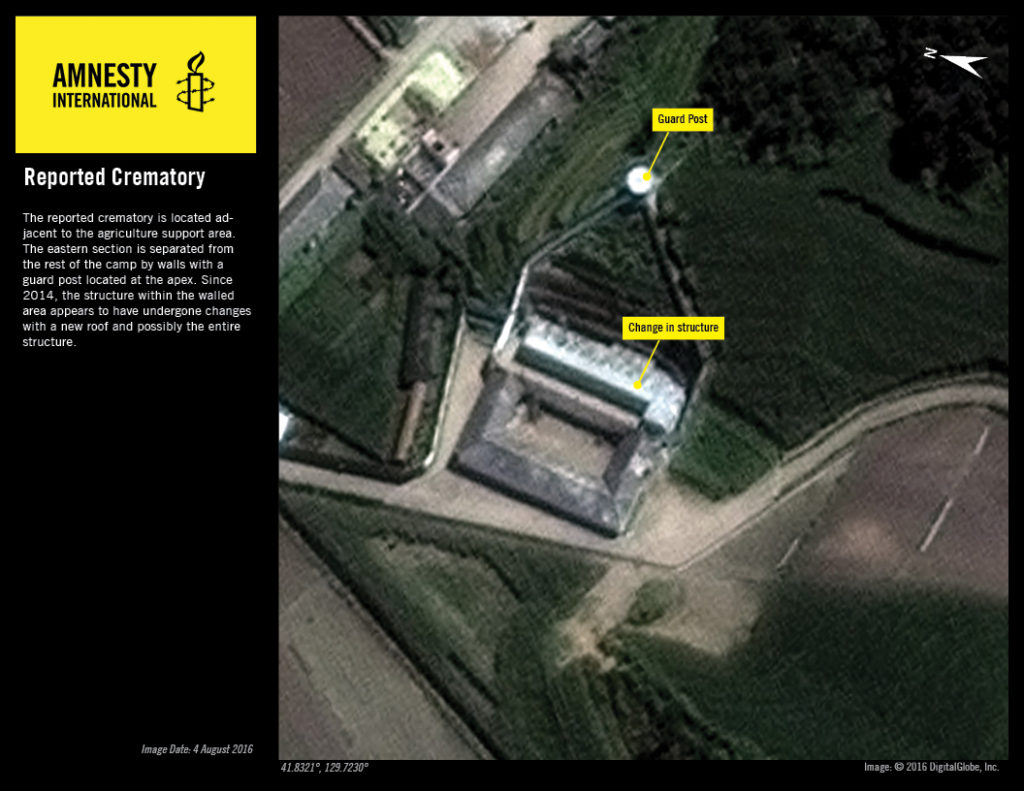 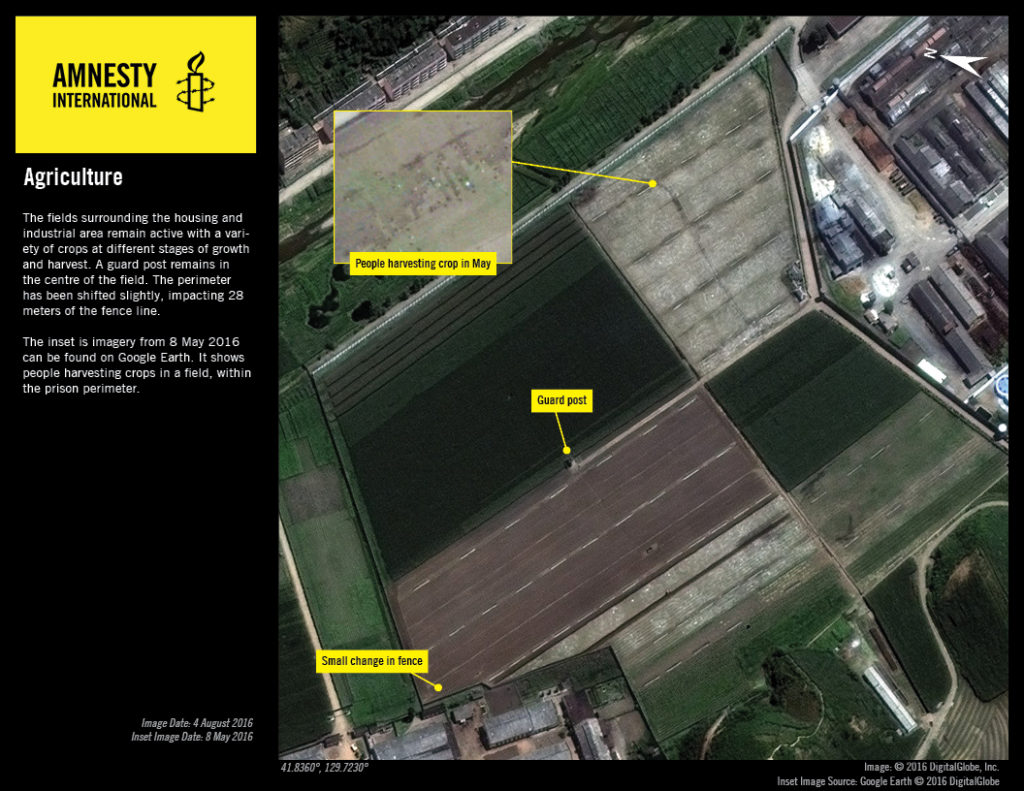 In imagery from May 2016, people are visible harvesting crops from a field within the prison’s perimeter which, along with the construction of a mill and probable mine are consistent with the ongoing and expansion of labour-intensive activities in the camp © 2016 DigitalGlobe, Inc. 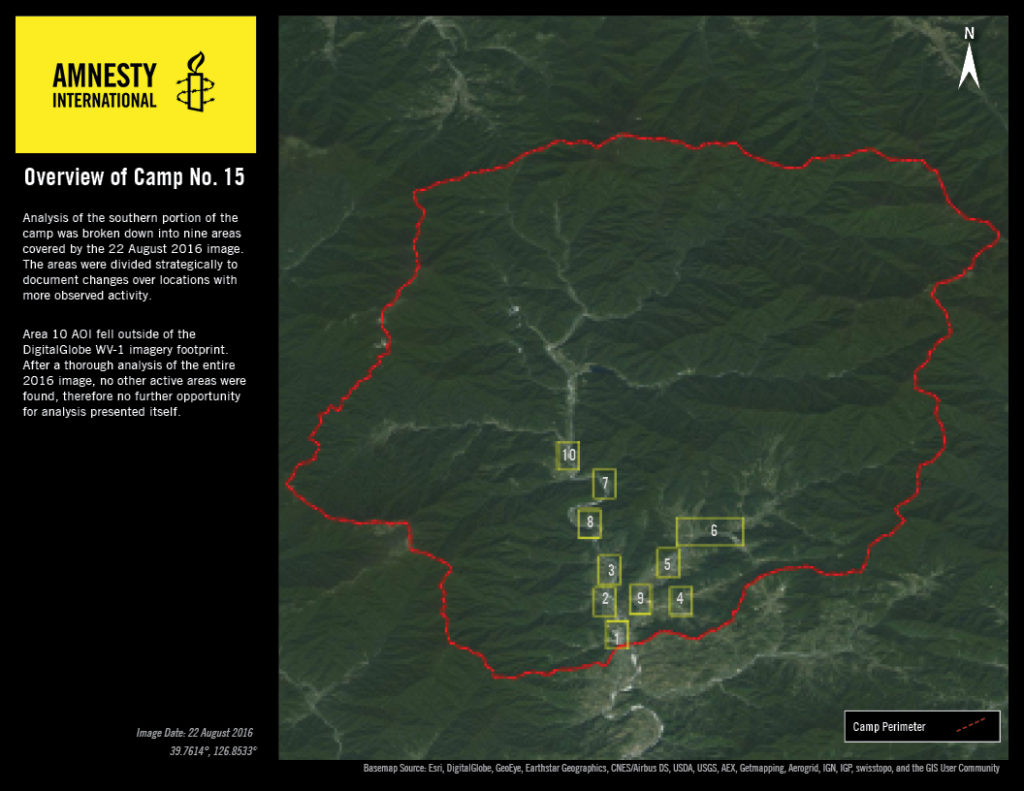 Over the period from December 2014 to August 2016, agricultural activities remained noticeable throughout the camp. The razing of 29 agricultural or industrial support buildings were observed over the same time period, as was the deconstruction of 14 prisoner housing units. Administrative buildings, guard posts, and fenced perimeters were maintained in the observed area of the examination period, which leads to conclusion that Prison Camp 15 is still functioning as a detention facility © 2016 DigitalGlobe, Inc. 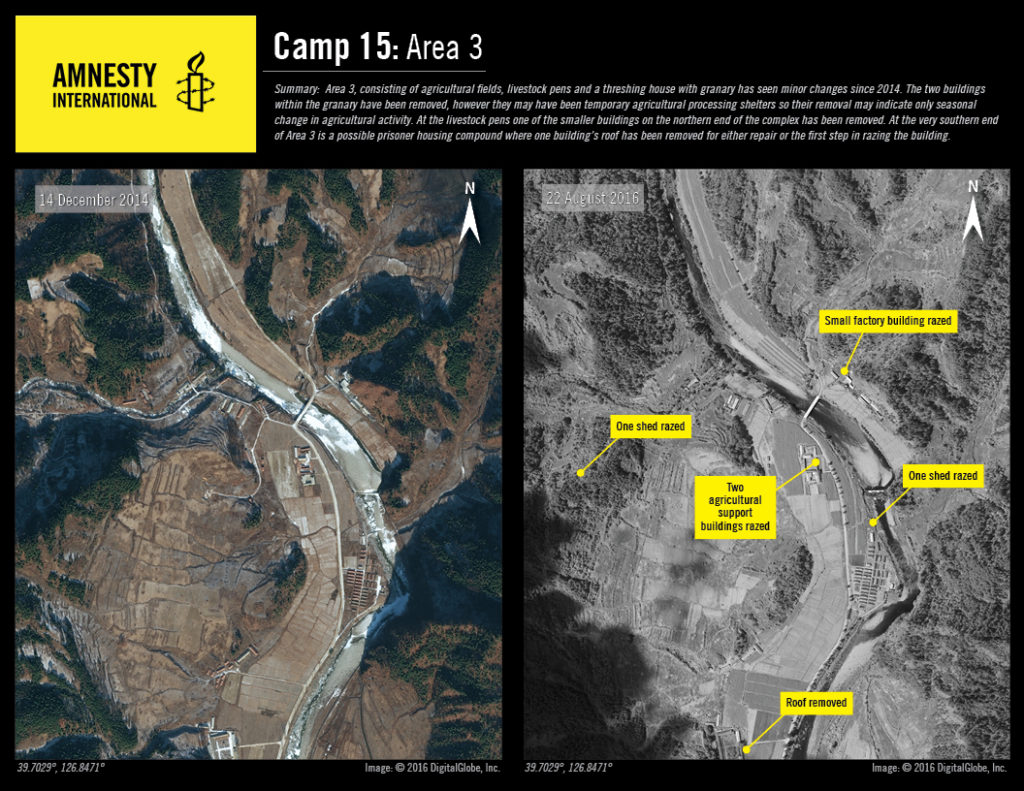