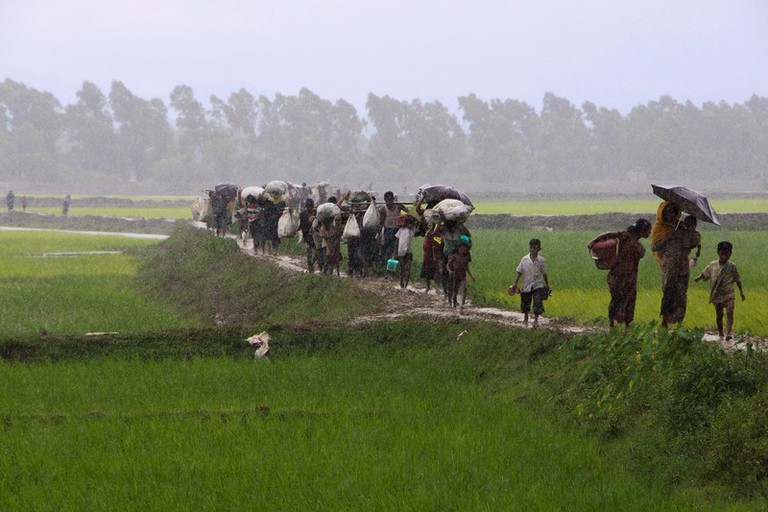 Amnesty International has assessed three new videos taken inside Rakhine State as recently as Friday afternoon showing large plumes of smoke rising from Rohingya villages, one of which was already deserted, as well as satellite imagery with smoke visible over burnt-out structures. Local sources in northern Rakhine State claim the fires were started by members of the Myanmar security forces and local vigilante mobs.

“This damning evidence from the ground and from space flies in the face of Aung Suu Kyi’s assertions to the world that what she called military ‘clearance operations’ in Rakhine State ended on 5 September. Almost three weeks later, we can see in real time how there is no let-up in the campaign of violence against Rohingya in northern Rakhine State. Rohingya homes and villages continue to burn, before, during and after their inhabitants take flight in terror. Not satisfied with simply forcing Rohingya from their homes, authorities seem intent on ensuring they have no homes to return to. The time has come and gone for giving Myanmar’s military and political leadership the benefit of the doubt. The international community must be unequivocal in its condemnation and take effective action to halt this ethnic cleansing campaign as well as bring the perpetrators to account,” said Colm O’Gorman, Executive Director of Amnesty International Ireland.

One video, taken on 21 September near the village of Hpar Wat Chaung village, northern Maungdaw township, shows agricultural land in the foreground with a large plume of smoke rising from a settlement located amid a group of trees. A local resident told Amnesty International that Myanmar Border Guard Police (BGP) and vigilante groups started the fires in the early afternoon, and that there were further burning operations that same evening.

Amnesty International reviewed satellite imagery of Hpar Wat Chaung from 16 and 22 September. Smoke is still visible in the later image, which clearly showed the village had been set ablaze and structures standing just days earlier had been burnt to the ground. Additionally, satellite sensors detected a recent active fire in the village, further corroborating the incident. Two more videos, taken from different angles reportedly outside Nga Yant Chaung village in Buthidaung township, show the village in flames on Friday afternoon. Activists, including a source in Rakhine State itself, have told Amnesty International that the burning began between 1:30pm and 2:00pm local time.

On 14 September, Amnesty International published irrefutable evidence of a mass-scale scorched-earth campaign across northern Rakhine State, where Myanmar security forces and vigilante mobs have been burning down entire Rohingya villages and shooting people at random as they try to flee. The violence is part of an unlawful and disproportionate response to coordinated attacks on security posts by a Rohingya armed group on 25 August.

The organisation’s analysis of active fire-detection data, satellite imagery, photographs and videos from the ground, as well as interviews with dozens of eyewitnesses in Myanmar and across the border in Bangladesh, show how an orchestrated campaign of systematic burnings has targeted Rohingya villages across northern Rakhine State.

The violence has prompted more than 429,000 people to flee to Bangladesh as refugees since 25 August. In legal terms, these are crimes against humanity – murder and deportation or forcible transfer of population. Tens of thousands of other people – including members of Rakhine State’s other ethnic minority communities – have also been displaced as a result of the violence.