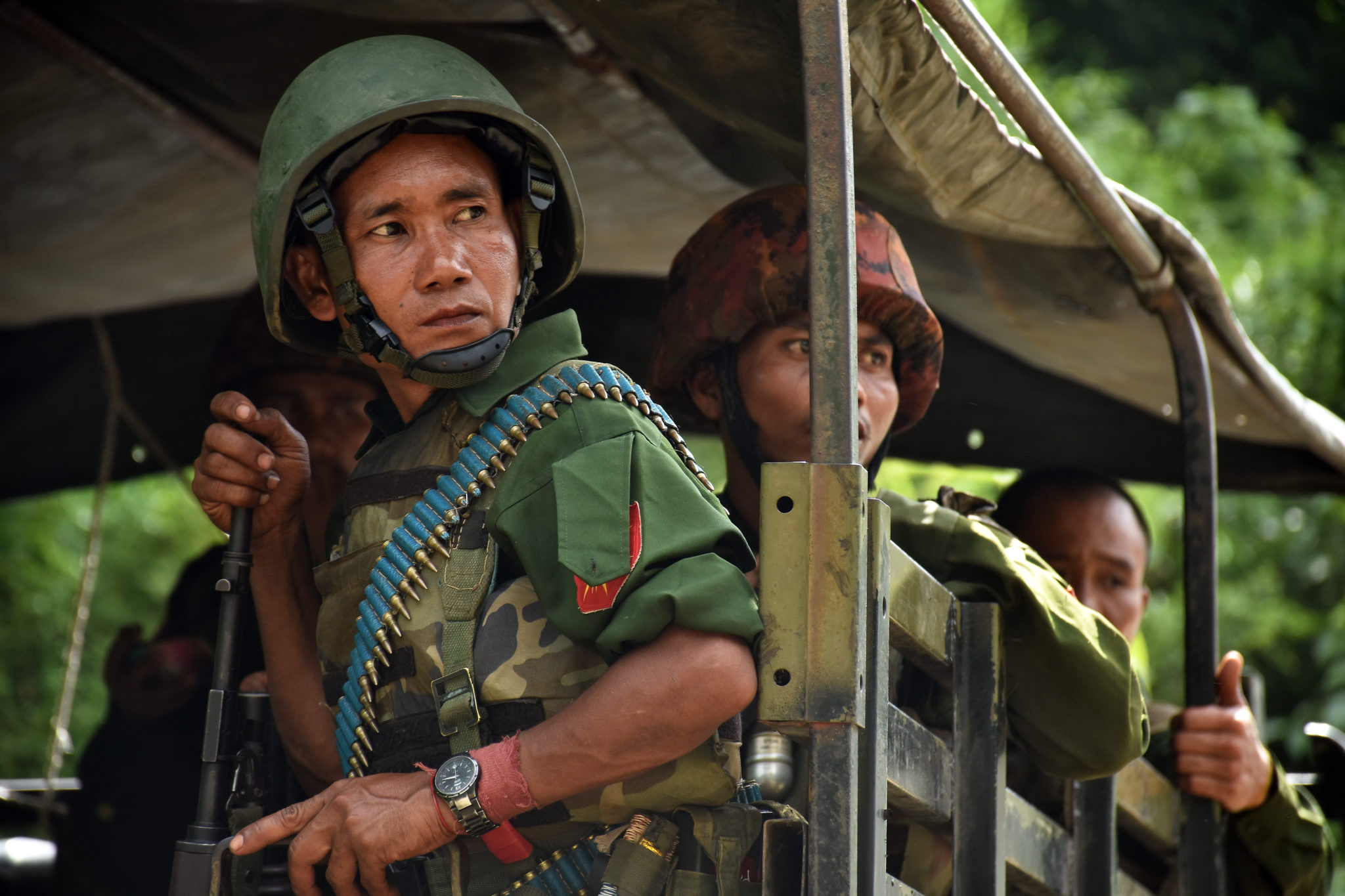 An Amnesty International investigation has exposed how international businesses are linked to the financing of Myanmar’s military, including many units directly responsible for crimes under international law and other human rights violations. Leaked official documents analyzed by Amnesty International reveal how Myanmar’s military receives huge revenues from shares in Myanmar Economic Holdings Limited (MEHL), a secretive conglomerate whose activities include the mining, beer, tobacco, garment manufacturing and banking sectors. MEHL has partnerships with a range of local and foreign businesses including Japanese beer multinational Kirin and South Korean steel giant POSCO.

MEHL shareholder records show that military units, including combat divisions, own about one third of MEHL’s shares. Records also detail links between MEHL and the Western Command, which oversees operations in Rakhine State, including atrocities committed against the Rohingya population and other ethnic minorities.  The report also provides information on the considerable annual dividend payments that shareholders have received since MEHL’s establishment in 1990.

“These documents provide new evidence of how the Myanmar military benefits from MEHL’s vast business empire and make clear that the military and MEHL are inextricably linked. This is not a case of MEHL unwittingly financing human rights violations – its entire board is composed of high-level military figures,” said Mark Dummett, Head of Business, Security and Human Rights at Amnesty International.

“The perpetrators of some of the worst human rights violations in Myanmar’s recent history are among those who benefit from MEHL’s business activities – for example, military chief Min Aung Hlaing owned 5,000 shares in MEHL in 2011. In the face of this incontrovertible evidence, businesses who currently partner with MEHL must end these relationships responsibly.”

Amnesty International’s research demonstrates that a direct link exists between MEHL’s business partners and human rights violations. MEHL works in collaboration with these business partners in establishing joint ventures or profit-sharing agreements in Myanmar; when profits are derived from these operations, they are provided to MEHL as shareholder. MEHL then disburses dividends to its own shareholders.

Amnesty wrote to eight companies who operate jointly with MEHL in Myanmar. These are:

In its reply, Pan-Pacific announced that it is terminating its business partnership with MEHL in the wake of Amnesty’s findings and the publication of the UN Fact-Finding Mission report of 2019. KBZ and Kirin have stated they are reviewing their relationship with MEHL, while others did not provide such commitments or did not respond at all. Full copies of responses can be found in Annex I of the report.

These companies all partner with MEHL in operations inside Myanmar. However, a few have global reach. Kirin is one of the world’s largest beer brewers, and its drinks, such as Kirin, San Miguel, Lion and Fat Tire are sold in bars and shops all over the world. POSCO, one of the world’s largest steelmakers, produces a range of steel products for the automobile, construction, and shipbuilding industries.

Shedding light on a secretive relationship

MEHL was founded by Myanmar’s military regime in 1990 and is still directed and owned by serving and retired personnel. This link clearly provides the military with substantial revenue on top of its official budget, but the exact nature of the relationship is shrouded in secrecy.

Amnesty International has seen two documents which expose new details about how MEHL finances the military. The first is a filing which was lodged by MEHL with Myanmar’s Directorate of Investment and Company Administration (DICA) in January 2020. It states that MEHL is owned by 381,636 individual shareholders, who are all serving or retired military personnel, and 1,803 “institutional” shareholders, consisting of “regional commands, divisions, battalions, troops, war veteran associations”.

The second document is a copy of a confidential MEHL shareholder report from fiscal year 2010-11. As well as providing information on the identities of MEHL’s shareholders, it documents the considerable annual dividend payments that shareholders received between 1990 and 2011.

The shareholder report was shared with Amnesty International by Justice for Myanmar, an activist group that campaigns for justice and accountability for the people of Myanmar. The contents of the report are being made public on the group’s website[1], access to which was blocked in Myanmar on 1 September by the Ministry of Transport and Communications. According to a spokesman for the ministry, the website spreads “fake news”. Justice For Myanmar has responded stating this is a bid to silence critical voices.

The total amount of dividend payments made in this 20-year period to all shareholders was more than 107 billion Myanmar kyat (107,869,519,830) – about 18 billion US dollars according to the official exchange rate. Of this amount, MEHL transferred 95 billion kyat – the equivalent of approximately 16 billion US dollars – to military units.

Both documents confirm that MEHL’s shareholders include military units and high-ranking military officers directly implicated in crimes under international law and other serious human rights violations.

For example, the 2010-11 report lists as shareholders 95 separate military units that fall within the Western Command, the regional command covering and overseeing operations in Rakhine State. Together, they owned more than 4.3 million shares and received payments of more than 1.25 billion kyat (208 million USD) in 2010-11. The Western Command is also listed as an MEHL shareholder in the 2020 DICA document.

The headquarters of battalions from the 33rd and 99th Light Infantry Divisions are also listed as shareholders. Amnesty International has documented these divisions’ involvement in crimes against humanity against the Rohingya population, including massacres of women, men, and children, in Rakhine State, and war crimes in Kachin and northern Shan States.

The DICA report also names senior military commanders, including those who commanded troops involved in crimes under international law, as shareholders. Senior General Min Aung Hlaing, the Commander-in-Chief and head of the War Office, is listed as shareholder number 9252. In 2010-11 Min Aung Hlaing owned 5,000 shares and received a dividend payment of 1.5 million kyat (250,000 USD). The UN has called for Min Aung Hlaing, who oversaw the brutal campaign against the Rohingya in 2017, to be investigated and prosecuted for genocide, crimes against humanity, and war crimes.

“While outsiders can’t know how these dividends are spent by military units, the size and regularity of these payments suggests that they cover operational costs,” said Mark Dummett.

“In providing this funding to military units, MEHL is boosting their resources and financing their operations which crimes against humanity and war crimes. Any company doing business with MEHL risks contributing to these violations and must take urgent steps to cut ties,” added Yadanar Maung, spokesperson of Justice For Myanmar.

MEHL’s “patron group”, which oversees the Board, includes the very officers responsible for crimes against humanity and other human rights violations, and therefore MEHL cannot be trusted to reform itself.  What is more, MEHL has shown no willingness to engage transparently with its business partners to demonstrate that it can reform its structure.

“MEHL’s business partners have a responsibility to respect human rights and seek to prevent or mitigate adverse human rights impacts linked to their operations. Given MEHL’s unwillingness to reform its structure, its business partners must assess their relationship to MEHL and responsibly disengage. This means taking into account credible assessments of potential adverse social, economic, and human rights impacts and taking steps to mitigate them when disengaging,” said Mark Dummett.

Amnesty International is calling on the Myanmar government to intervene to break the link between the armed forces and the economy. Part of this must be a thorough reform of the ownership and management of MEHL. The government should also establish a fund, using MEHL’s profits, to compensate the victims of human rights violations committed by military units that are financed by or are shareholders of MEHL.

1] For users inside Myanmar, Justice For Myanmar has created a mirror site that can be accessed here.