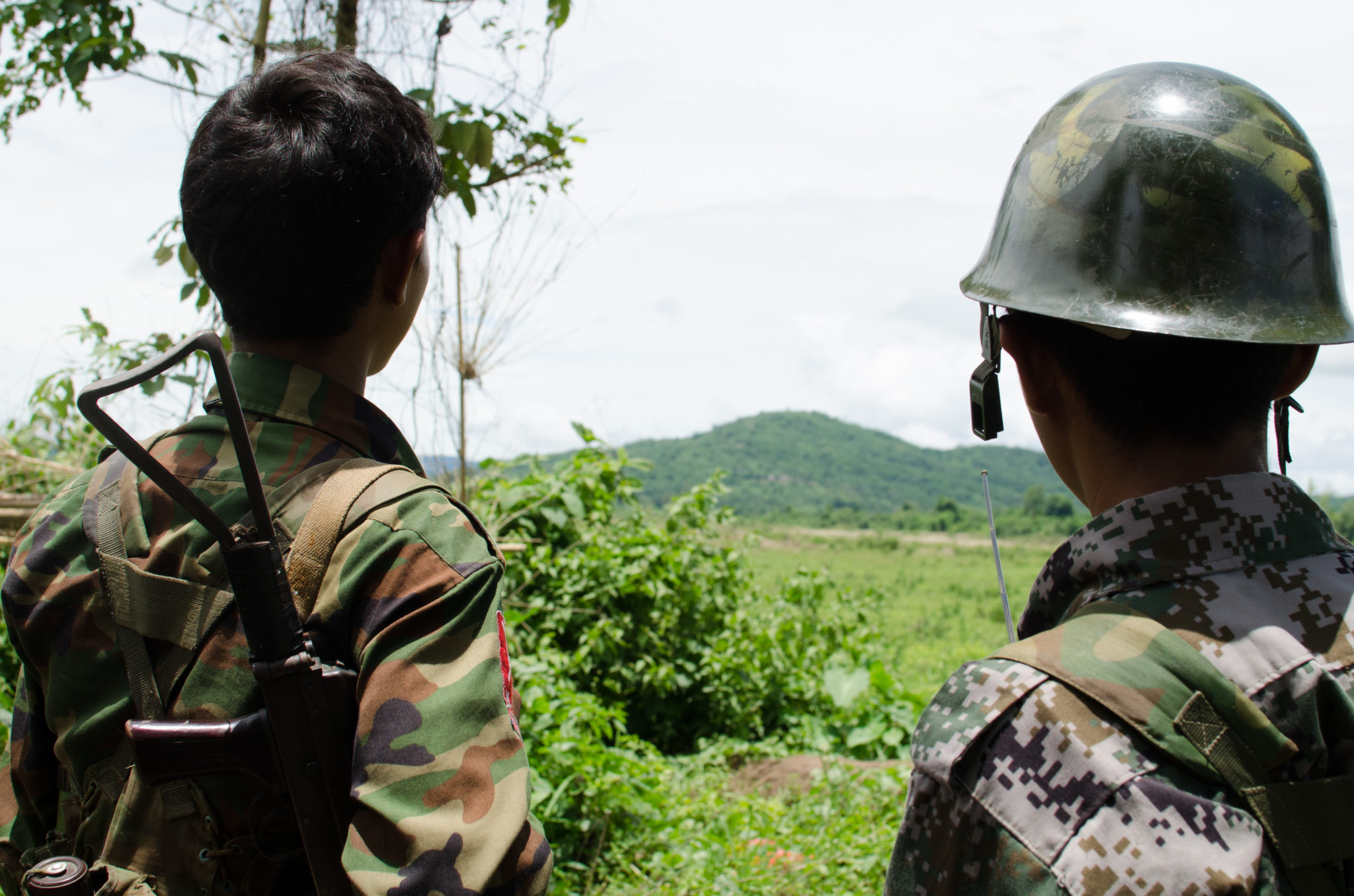 Civilians from minority ethnic groups suffer appalling violations and abuses, including war crimes, at the hands of Myanmar’s military and ethnic armed groups in the country’s Kachin and northern Shan states, Amnesty International said today in a new report based on three recent trips to the conflict area.

‘All the Civilians Suffer’: Conflict, Displacement and Abuse in Northern Myanmar details how soldiers from the Tatmadaw, as Myanmar’s Armed Forces are known, mete out torture and extrajudicial executions, shell civilian villages indiscriminately and place punitive restrictions on movement and humanitarian access.

Meanwhile, some ethnic armed groups at times abduct civilians seen to support an opposing party, forcibly recruit men, women and children into their fighting forces and impose “taxes” on impoverished villagers trapped in the conflict.

“Almost 100,000 people have been torn away from their homes and farms due to conflict and human rights violations in northern Myanmar. All sides must protect civilians amid the conflict and the Myanmar authorities need to immediately end the humanitarian access restrictions that have further harmed this already-vulnerable population,” said Matthew Wells, Senior Crisis Response Advisor at Amnesty International.

“The international community is familiar with the appalling abuses suffered by the Rohingya minority in Myanmar’s Rakhine state, but in Kachin and northern Shan states we found a similarly shocking pattern in the Army’s targeting of other ethnic minorities.”
Amnesty International conducted more than 140 interviews on the ground between March and May 2017, following renewed fighting since August 2016 in Kachin and northern Shan states, which border China. The organization visited towns and villages in areas affected by fighting as well as 10 camps for internally displaced persons (IDPs), and spoke to civilian victims and eyewitnesses, community leaders and humanitarian officials.

Displacement crisis
More than 98,000 civilians are currently displaced in northern Myanmar amid fierce fighting between the Myanmar Armed Forces and various ethnic armed groups in the area, including the Kachin Independence Army (KIA), the Ta’ang National Liberation Army (TNLA), the Arakan Army (AA), and the Myanmar National Democratic Alliance Army (MNDAA).
Myanmar’s government has exacerbated the difficulties for many displaced persons by restricting humanitarian access to certain affected areas, particularly those controlled by armed groups. Humanitarian officials said this undermined their ability to respond quickly to emergency situations and to provide necessary humanitarian assistance like shelter, access to water, and sanitation.
Violations by the Myanmar Army

Since fighting escalated in November 2016, the Myanmar Army has committed egregious violations against civilians, sometimes amounting to war crimes, which continued through Amnesty International’s final research mission in May 2017.

In the town of Monekoe in late November 2016, the Army arbitrarily detained 150 men, women and children who were preparing for a wedding. After releasing the women and children, as well as men from certain ethnic groups, the Army used the remaining men as human shields along the inner perimeter of a hilltop base; several were killed and others were seriously wounded by gun and grenade fire.
The report also documents two cases of enforced disappearance of ethnic minority civilians and four incidents of extrajudicial executions by the Myanmar Army since mid-2016, involving at least 25 victims.

Eighteen young men were killed in a single massacre at Nam Hkye Ho village in late November 2016. Amnesty International interviewed two eyewitnesses who said that around 100 Myanmar Army soldiers entered the village after fighting nearby with the MNDAA. Most of the village, including the women and children, had fled as fighting approached; after letting the remaining elderly men go, the soldiers marched the young men off at gunpoint. A short while later, fleeing villagers heard the sound of gunfire from the direction in which the soldiers had left.
The surviving villagers fled across the border to China, and when they returned several weeks later, found the remains of bodies dumped in two mass graves.
“We saw charred remains of what looked like a body. [There were] bones, but it was mostly ashes. We saw some of the [belongings]. … We already knew the 18 people were missing,” an elderly villager told Amnesty International.

The report documents how the Myanmar Army has repeatedly violated international humanitarian law by failing to distinguish between civilian and military targets when firing mortar shells.

In one instance on 12 January 2017, mortar shells were fired as dozens of villagers gathered for a festival in Hol Chaung village, northern Shan state, killing two civilians, including a young boy, and injuring at least eight more. Though the Myanmar Army denied responsibility for the shelling, it was almost certainly to blame, based on eyewitness accounts and fragments of the mortars observed by Amnesty International.

The Army also continues to forcibly conscript villagers as porters and guides, a practice often linked to other abuses, including torture. As four Kachin men forcibly guided Army soldiers in November 2016, the TNLA attacked the unit. The soldiers blamed the four men for signalling their position, beating them brutally and using a shaving blade to slice the faces of three of them.
Civilians repeatedly implicated the Army’s 33rd and 99th Light Infantry Divisions in many of the violations, but soldiers and commanders responsible almost never face investigation, much less prosecution, even for war crimes.

“For decades, the Myanmar Army has acted with near total impunity. This must change urgently, with those responsible for atrocities brought to book. The Myanmar government must also ensure unfettered access to the UN-established independent, international fact-finding mission,” said Matthew Wells.

Abuses by armed groups
While many ethnic minority civilians see armed groups as their protectors, they also suffer abuses from these groups.
Various armed groups use forced conscription, including of children, and impose “taxes” on villagers and market sellers, extorting cash and goods from communities that are already vulnerable due to the conflict.
Amnesty International documented a total of 45 abductions of civilians committed by two ethnic armed groups in the course of fighting in northern Shan state. People were typically taken in groups. Months later, their families still have no information about their whereabouts, raising fears about summary killings.
Landmines and IEDs

Both the Myanmar Army and ethnic armed groups use landmine-like weapons, planting antipersonnel landmines or improvised explosive devices (IEDs) that often harm civilians, including children, going to work on the family’s farm or returning home after being displaced. The Myanmar Army is one of only a handful of state forces worldwide, along with North Korea and Syria, to still use antipersonnel landmines. Amnesty International is calling on all sides to halt their use, facilitate clearance and for Myanmar to accede to the global Mine Ban Treaty.

The UN Human Rights Council must ensure that its recently announced independent, international fact-finding mission is fully resourced to investigate ongoing conflict abuses in Kachin and northern Shan states. UN agencies on the ground and international donor countries must call for an end to restrictions on humanitarian access and increase their assistance to those affected by the conflict.
“Aung San Suu Kyi has prioritized the ongoing national peace process – but for it to succeed, it will have to be rooted in accountability and respect for the rights of all civilians, including ethnic minorities,” said Matthew Wells.