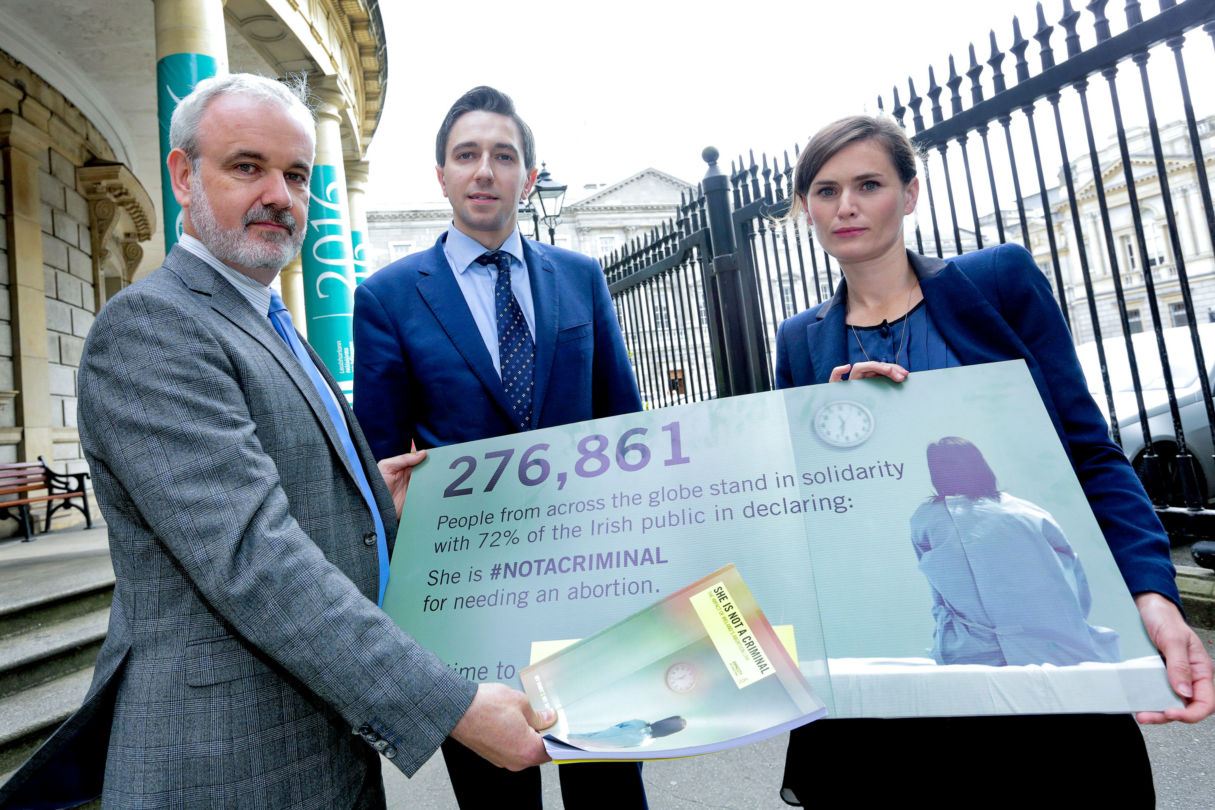 Today, Amnesty International presented a global petition calling on the Irish government to end the serious human rights violations experienced by women and girls as a result of Ireland’s abortion law to Minister for Health, Simon Harris TD.

Since the launch of the global My Body, My Rights campaign in June 2015, Amnesty activists around the world have stood in solidarity with women and girls impacted by Ireland’s cruel abortion law. Irish law prohibits women from accessing abortion even in cases of rape or incest, severe or fatal foetal abnormality or where there is a risk to the woman’s health. Under international human rights law, women and girls have a right to access abortion in these circumstances.  Currently, abortion is prohibited and criminalised in all circumstances, except when there is a “real and substantial risk” to the woman’s life.

“Today, we are presenting Minister Harris with the collective voices of 276,861 people who are calling for urgent reform of our abortion laws. Women and girls in Ireland who need abortions are treated like criminals, stigmatised and forced to travel abroad, which takes a serious toll on their mental and physical health. The international human rights framework is clear. The Eighth Amendment must be repealed and replaced with a legal and healthcare framework that respects the rights of women and girls. We are encouraged to see an increased sense of urgency from the government in addressing this issue. Amnesty International has tentatively welcomed the forthcoming citizens’ assembly, though women’s human rights, health and medical best practice must be among its guiding principles. The assembly should have a clear timeframe and most importantly, it must include an unequivocal commitment to follow through, including a referendum to repeal the Eighth Amendment,” said Colm O’Gorman, Executive Director of Amnesty International Ireland.

Women and girls in Ireland who need abortions are treated like criminals, stigmatised and forced to travel abroad, which takes a serious toll on their mental and physical health

In May 2016, the United Nations Human Rights Committee found that Ireland’s abortion law violated the human rights of Amanda Mellet, who travelled to the UK for a termination following a fatal foetal abnormality diagnosis. The Committee found that Ireland’s abortion law caused her “intense physical and mental suffering” and called on the Irish government to redress the harm suffered and reform its laws to ensure that other women do not continue to face similar human rights violations. In the past two years, Ireland’s abortion regime, which is among the most restrictive in the world, has been condemned by the UN Committee on Economic, Social and Cultural Rights, the UN Committee on the Rights of the Child, and by a number of countries as part of Ireland’s Universal Periodic Review.

A Red C poll, commissioned by Amnesty International and carried out in February 2016, found that the majority of people consider Ireland’s abortion ban cruel, inhuman, hypocritical and discriminatory. For this reason, 80% of people would vote to repeal the Eighth Amendment.

“I would like to thank activists both here in Ireland and around the world for their commitment to this campaign. Together, we have elevated the voices of women who have experienced the appalling impact of Ireland’s abortion law first hand,” said Colm O’Gorman.

Today’s petition handover marks the conclusion to Amnesty International’s global My Body, My Rights campaign which focused on women’s sexual and reproductive rights. Due to the seriousness of the human rights violations involved, Ireland was selected as a focus country for this campaign alongside Burkina Faso, El Salvador and the Maghreb region. Though the global campaign has ended, Amnesty International Ireland will continue its domestic campaign for repeal of the Eighth Amendment and the introduction of a human rights compliant framework for abortion in Ireland.

Notes to the Editor:

The Amnesty International/Red C Research & Markets poll was conducted in February 2016 to establish a deeper understanding of public attitudes to Ireland’s laws on abortion. The poll’s complete findings are available here: http://bit.ly/NotACriminalPoll

In June 2015, Amnesty International published the She is not a criminal: The Impact of Ireland’s abortion law documenting the shocking human rights violations which women and girls in Ireland experience.