Mexico: Reports of torture spiral out of control as authorities turn a blind eye

Torture and ill-treatment is out of control in Mexico, with a 600 per cent rise in reported cases in the past decade reflecting a culture of tolerance and impunity, according to a new report published by Amnesty International today. The organisation is calling on the Mexican government to stop the wide-spread and persistent use of torture by members of the police and armed forces.

The findings of Out of control: Torture and other ill-treatment in Mexico show that over 7000 complaints of torture and ill-treatment were registered with the National Human Rights Commission (CNDH) between 2010 and the end of 2013.

People who are detained are turning to the courts for protection, with 3,749 federal injunctions filed between 2005 and 2013 by detainees or their relatives seeking protection from torture and other human rights violations. However, only seven torturers have ever been convicted in federal courts, with even fewer prosecuted at state level.

“The shocking rise in the use of torture in Mexico means the threat of ill-treatment is a very real fear for every person in the country. Our survey found 64 per cent of Mexican citizens are afraid that they would be tortured if detained by the authorities,” said Erika Guevara Rosas, Americas Director Amnesty International. 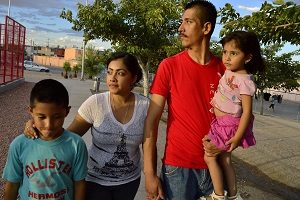 “There is a routine failure to enforce safeguards to prevent torture and other ill-treatment by the authorities. This is compounded by the fact that investigations into complaints are often biased and downplay the severity of the abuse. The authorities cannot continue to turn a blind eye to torture.”

This report is the first in a series of five different country reports to be released as part of Amnesty International`s global STOP TORTURE campaign.

Victims throughout the country described to Amnesty International how they were subject to beatings, death threats, sexual violence, electric shocks and near asphyxiation at the hands of police or the armed forces, often with the aim of extracting “confessions” or incriminating others in serious crimes.

Ángel Amílcar Colón Quevedo, a black Honduran, spoke of how he faced torture and abuse by police and military based on his status as a migrant and his race. He was beaten, asphyxiated using a plastic bag, stripped, forced to perform humiliating acts and was subjected to racist verbal abuse. He remains in prison awaiting trial having been charged on the basis of the statement he was forced to make as a result of his torture. Amnesty International declared him a prisoner of conscience earlier this year. This is only one of over 20 such accounts in the report.

Despite legal prohibition the criminal justice system continues to accept evidence obtained as result of arbitrary detention and torture. This not only encourages the continued use of torture and other ill-treatment, but it also means that unfair trials and unsafe convictions are the norm, further undermining the credibility of the justice system and the human rights of criminal defendants.

On the rare occasion official investigations into allegations of torture happen, they are often flawed.

The Federal Attorney General`s Office`s special forensic procedure to investigate cases of torture and other ill-treatment often falls well short of the international standards outlined in the Istanbul Protocol. Despite these shortcomings prosecutors and judges rely on these flawed official investigations and refuse to accept other independent evidence.

“The lack of credible, thorough investigations into allegations of torture constitutes a double-abuse. If the authorities fail to gather evidence of their mistreatment, victims are left without remedy and unable to demonstrate that their ‘confessions’ were extracted under duress,” said Colm O’Gorman, Executive Director of Amnesty International Ireland.

“It is time to radically overhaul the investigation of allegations of torture and other ill-treatment, particularly the application of the internationally recognised standards of the Istanbul Protocol. The Mexican authorities must also ensure that the evidence gathered by independent medical experts can be recognised in judicial proceedings.”

The report outlines a series of measures that must be taken to prevent, investigate and punish torture and other ill-treatment, starting with an acknowledgement by the government of the scale of torture and a public commitment to combating this grave human rights violation as a top priority.