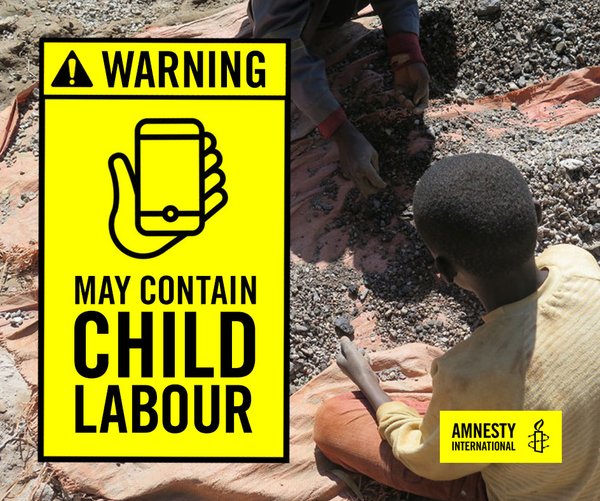 If Paul lived in the UK or US, he’d likely be playing Pokémon Go on his phone in between class. But there is no school for this 14-year-old. Instead, he spends long days in hazardous underground tunnels mining cobalt by hand, hauling back-breaking loads of between 20kg and 40kg for $1 or $2 a day. He is one of around 40,000 children in the Democratic Republic of Congo who mine the cobalt for the batteries that run our phones and power our Pokémon hunting.

Their childhoods have been stolen by an unchecked, complex global supply chain of the kind that can frequently lead to human rights abuses in countries with weak regulations and judicial institutions, far away from corporate headquarters. Tales like theirs are not limited to the trade in cobalt.

Leaders have the power to end this
Leaders of the world’s largest developed and emerging economies have an opportunity to change this when they meet this week in the Chinese city of Hangzhou, where the G20 will plan a course of action to stimulate the world economy and address other issues of global concern, such as climate change.
China – which holds the G20 presidency – is pushing for more spending on infrastructure and to direct trade and investment towards developing countries in order to achieve strong, balanced and sustainable growth. It is also promoting additional “green finance” for projects aimed at reducing carbon emissions.
One example is development of better electric-power vehicles, which run on batteries using cobalt. That brings us back to children like Paul, and shows why no programme of development can be truly sustainable when states fail to protect – and business fails to respect – the human rights of those affected by economic activity.

The two sides of globalization
Global trade and development investment can have enormous impact on people’s lives. Employment opportunities raise incomes for individuals and families, and new infrastructure and technologies can bring people together.
However, the same corporations that bring benefits to some can bring serious harm to others. Amnesty International’s research shows that, left unchecked, cross-border trade and investment can have devastating effects on some of the most impoverished and marginalized communities.
Children like Paul have been let down by companies, including some of the world’s biggest, which are failing to carry out basic checks to ensure that the cobalt used in their products is not mined by children.
Such due diligence is a fundamental way in which companies can fulfil their human rights responsibilities, but few will take these basic steps unless required to do so by law. The G20 can take the lead in promoting measures that oblige companies to respect human rights throughout their global operations.

Making development projects work for all
G20 countries can also wield their influence with international financial institutions (IFIs), to ensure the infrastructure development projects they fund don’t tear apart communities and leave thousands homeless and without adequate compensation – which has happened all too often in the past. 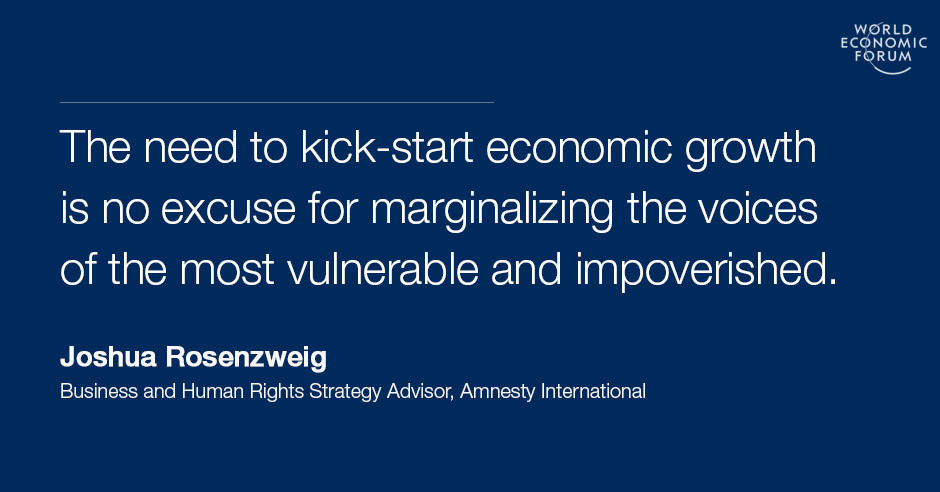 There are supposed to be safeguards in place to prevent such human rights abuses. But in reality human rights are practically absent from the safeguards of the major IFIs, meaning that far more time is spent worrying about whether loans can be repaid than whether projects contribute to forced evictions, labour abuse or environmental damage.
By merely paying lip service to human rights, IFIs are ignoring the legitimate concerns of the communities the projects are supposed to benefit. Transparency, participation and accountability need to be prioritized so that those whose lives stand to be most affected by development projects can have a say in how those projects are designed and implemented.

The worrying reality is that space for such constructive dialogue is shrinking. All members of the G20 need to recognize that freedoms of association, assembly and expression are essential to achieving effective economic and social development. The need to kick-start economic growth is no excuse for marginalizing the voices of the most vulnerable and impoverished communities. G20 countries are well placed to address these injustices. If the plan of action that emerges from Hangzhou fails to recognize the centrality of human rights, then the claims of sustainable or inclusive investment will ring hollow and children like Paul will continue to be left behind.