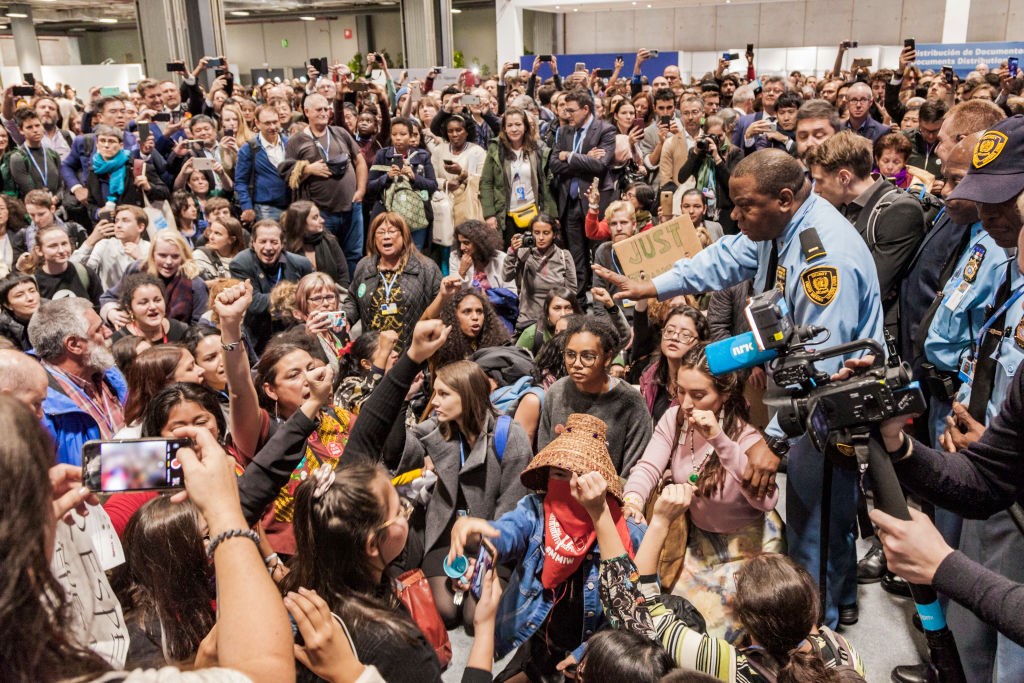 “What do we want? Climate justice! When do we want it? NOW!!!” If you have been to just one climate march in your life, you will have certainly heard this slogan. It has become omnipresent whenever people are expressing concerns over the climate crisis.

Behind this simple chant, there are deep demands rooted in human rights principles. There is the call for fast climate action by government and corporations, to avoid even more catastrophic human rights impacts than what we are seeing now. There is the appeal to wealthier industrialised states which have contributed the most to the climate crisis to step up and pay up in order to redress some of the injustices accentuated by climate change. There is the reminder that climate action needs to have people’s participation and human rights, including Indigenous peoples’ rights, at its centre. At all costs it needs to avoid human rights violations and contribute to making society a more equal, just and inclusive place for all.

Yet human rights considerations still play a marginal role in climate negotiations. The outcomes of the Madrid climate talks (COP25) are just another proof of it.

Following a year of school climate strikes and mass mobilization in many countries of the world, states were expected to act in line with the urgency proved by scientists and increasingly felt by people. Instead, most wealthier countries and other high emitting countries remained stuck in selfish and short-sighted considerations which prevented real progress.

While the final COP25 decision recognized the urgency of enhancing climate action, it failed to set a clear obligation for states to come up with ambitious national climate plans in 2020 capable of keeping the global average temperature rise below 1.5°C. This shows a complete disregard for the human rights of people who will be most affected by spiking climate impacts. For millions of people around the world, the formulation and, above all, the implementation of strong climate plans simply means a difference between life and death.

Wealthy countries are responsible for the bulk of greenhouse gas emissions and have for years profited from them, while people in poorest countries are suffering most of the damages inflicted by the climate crisis. In Madrid, they had the opportunity to recognize this historic imbalance and accept their duty to pay for the devastation already wreaked by climate impacts such as cyclones, droughts and sea-level rise. Instead, they opposed the mobilization of new and additional resources to support affected people. This in practice means turning their back to the almost 4 million people who have lost their homes, livelihoods or access to public services  in the two cyclones in Mozambique earlier this year, or to residents of Pacific islands in urgent need of relocation due to sea-level rise.

Similarly, states were once again unable to reach an agreement on mechanisms allowing countries to trade emission reductions (also known as “carbon trading”). Countries like Australia, Brazil and China continued to push for loopholes which would have ultimately resulted in weakening the effects of climate mitigation measures, in violation of the rights of those who stand most at risk from climate impacts.

Also, worryingly, there was insufficient willingness from states to include explicit reference to human rights safeguards in carbon trading rules. Such guarantees are necessary (and must be agreed on in future negotiations) to ensure that negative human rights impacts can be assessed and addressed prior to adopting climate mitigation projects and that people directly impacted by carbon market projects have a say in shaping such measures. This is a very strong demand from Indigenous peoples, as they too often have paid the price of ill-conceived climate projects, such as hydroelectric dams or biogas initiatives initiated without their free, prior and informed consent and resulting in forced evictions, water contamination, or permanent damage to their cultural rights.

What came out of this last round of climate negotiations paints a grim picture. It was certainly a source of frustration at COP25, prompting civil society observers to take a massive direct action inside the negotiation venue on 11 December.  This move was met with an unprecedented decision by UN security officers to expel more than 300 observers for the day.

In 2020 we need to step up our game. We need to forge strong coalitions at national level to demand ambitious and human rights-compliant climate action that achieves a just transition away from fossil fuels. We need to mobilise like never before. The world’s most important struggle needs the world’s most powerful, diverse and united people’s mass movement ever assembled. As the year ends, we can all start 2020 by making our new or renewed commitment to climate justice our New Year’s resolution.